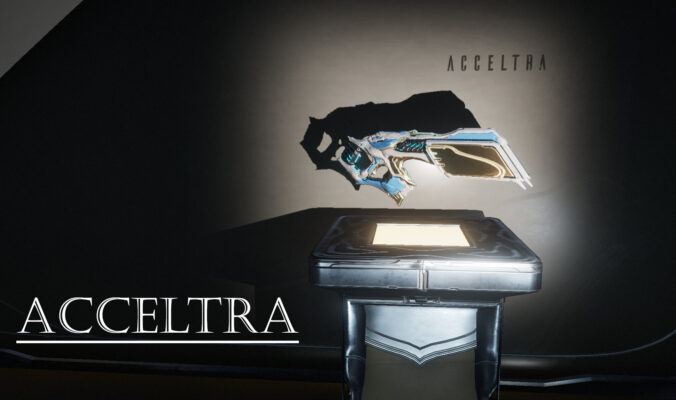 Have you ever dreamed about a micro-missile launcher with a really good fire rate, small(ish) explosions with a high crit chance, and all that on top of an easy way to acquire said weapon? Then get yourself an Acceltra and start shooting stuff!

The signature weapon of Gauss is basically an automatic rocket launcher, but uses really small missiles instead of big rockets.

The Acceltra also has an inbuilt safety measure: The missiles will only explode with a three-meter-radius after traveling for at least seven meters, which makes it harder to accidentally kill yourself.

But it might still happen (trust me, it will happen) if you’re rushing into your explosions.

To get your hands on the Acceltra, you do need to head to the Dark Sector Disruption mission (Ur on Uranus) and start killing Demolysts.

While the drop chance is fairly low with only 1,25%, you do get four Demolysts per round, which means that statistically you do have to kill ~80 Demolysts.

Farming the Acceltra might get grindy, it will totally be worth it once you hold the missile launcher in your hands.

Before we actually talk about the different build ideas, we do need to talk about the really low ammo reserves: With a magazine of 48 missiles and an ammo reserve of only 120 rockets you will eventually see yourself looking for rifle ammunition on the ground.

Especially in boss fights or in missions with a smaller density of enemy spawns you will get to a point where you really wish for some ammo drops.

Using your Carrier sentinel with its Ammo Case mod is almost a necessity unless you want to dedicate one mod slot for Primed Rifle Ammo Mutation (or the normal version) – which isn’t really worth it.

It is also important to note that the Acceltra does guaranteed Impact damage with each shot, so increasing your Impact damage output by using Crash Course and/or Rupture might be worth it, depending on the missions and mobs you’re going to encounter.

Tip: If you want to know more about the Acceltra and its abilities, feel free to take a look at the wikia page.

This is the best build for the Acceltra and is also probably what you will end up playing most of the time.

The idea here is pretty simple, but effective: You do want to increase your critical damage output by using Point Strike and Vital Sense and then include Hunter Munitions for some extra Slash damage.

This will make sure that you can also melt away high armor units that might otherwise become a problem. Multishot is always great and will allow you to spread your explosions even more, while the downside of using Heavy Caliber is almost non-existent, thanks to the very high accuracy of the weapon.

The only mod we really need to talk about is Critical Delay and to be honest, this build will also work very well without the additional critical chance.

If you don’t like the reduction of your attack speed, our best recommendation is actually using Crash Course, Primed Rifle Ammo Mutation (or the normal version) or Primed Fast Hands. But especially against higher armor units you really want to have Hunter Munitions proc as often as possible.

In the end it comes down to personal preference and enemy units, so pick whatever you think is most useful to your own gameplay.

While this build won’t give you the big Slash procs the standard build offers, you do from time to time need to pick a build that will also give you a little bit of crowd control.

To achieve that we use a hybrid version that combines the high critical damage output with some Blast damage procs.

Even though the status chance is fairly low on the Acceltra, using Thermite Rounds and Rime Rounds will give you a ~30% to get a Blast proc and with shooting twelve missiles per second you actually have a decent chance to knockdown whole groups of mobs.

The weakest mod here is Vigilante Armaments and if you really want to include Primed Rifle Ammo Mutation (or the normal version), this is the mod you’re going to cut.

But since multishot also increases the chance for a Blast proc, you don’t really want to cut it unless you see yourself having constant ammo problems.

If you haven’t had ammo problems before then go ahead and use this build to see your ammo reserve melt within seconds.

This is basically the same idea we used with the standard build, but Vile Acceleration and Speed Trigger are here to let the Acceltra make a rain of rockets.

While you usually don’t want and need to have an even higher attack rate, you might want to try this build in open worlds: If you see those feisty troop carriers incoming, use your missile launcher to quickly destroy them before they can unload.

Or use it against really big groups of enemies. Or do whatever you like.

Again, we can’t stress enough that you will quickly run out of ammo unless you bring some form of ammo recovery.

We recommend using the Carrier sentinel, but if you find another solution, feel free to use that. Otherwise you will find yourself looking for rifle ammo drops constantly.

The Acceltra is actually a really great weapon, even though it sadly can’t use the Firestorm mod. You probably wouldn’t even use it, because increasing a three-meter-radius to 3,72 meters isn’t great, but everyone should have the choice to do that if they want.

However, you can use this weapon in almost all game modes as long as you bring some form of ammo recovery and it will even carry you through late game stages of the game. Make sure to try out our builds and modify as needed and have fun while playing.

If you found an even better build, if you do have any questions or if you just want to share information with the rest of the world – don’t hesitate to leave us a comment!