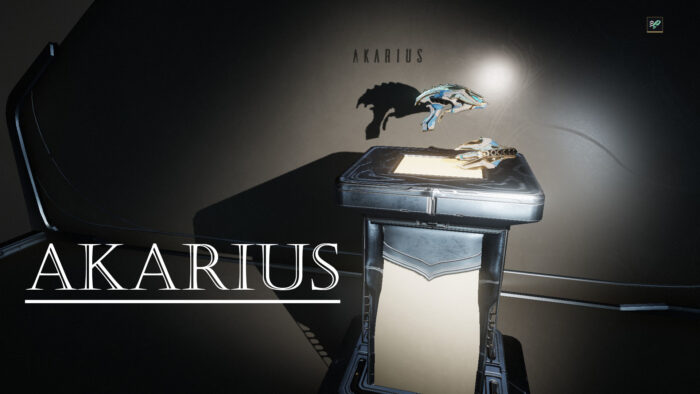 The Akarius is a Dual Pistol, which shoots several homing rockets with an explosion radius of five meters. It is also the signature weapon of Gauss and brings a very high status chance and accuracy into the battlefield.

The innate Blast damage is great against everything that is Fossilized or Machinery and even does give the players the possibility of using a good amount of crowd control with those Blast procs.

While playing with this weapon you really have to look out for self-damage, even though there is the safety measure of a minimum arming distance of ten meters.

So make sure not to jump into your own explosions.

Getting your hands on the blueprint can be grindy, but in the end the mission itself isn’t hard to do: The Demolysts on Ur (Uranus) have a 1,25% chance to reward the blueprint, so head into the mission and keep on doing the Disruption run until you get the drop – which statistically takes ~80 kills.

After you acquired (and crafted) the secondary weapon you might want to look for some ideas on how to mod your newest weapon.

This is exactly when you should start reading this guide.

While playing with the Akarius you need to know that the rockets need to travel a minimum of ten meters before they explode, which means that you should try and keep your distance – or otherwise you might accidentally kill yourself.

It also means that you’re going to have some trouble to finish enemies that are right beside you, because your damage output within the ten meters with the Akarius is very low.

So keep in mind that positioning while shooting is crucial if you’re going to play with this secondary.

It is also important to note that the critical chance is so low that building around that is simply not worth your time and mod capacity.

So even if you like to experiment, you really don’t want to go down that route. Instead, try building for status chance and all the benefits that come with that.

The most well-rounded build for the Akarius is something that looks like this.

The idea here is super simple: You use all the great standard secondary mods (Hornet Strike, Barrel Diffusion and Lethal Torrent) and combine it with two +60% status chance mods to get to more than 90% status chance.

Magnum Force is a great addition, because the homing rockets totally negate the accuracy reduction of the mod. That leaves us with two more mod slots to fill and to be honest, Primed Quickdraw (or the normal version) are an auto-include here.

With the fairly low magazine you’ll need to reload a lot and without the extra reload speed the reload time is just too long.

Primed Heated Charge is your best pick if you’re going for the extra Blast damage, simply because it will add a lot of extra damage.

There aren’t many mods you want to use instead of what you’re seeing in this build, but the candidates that didn’t make the cut are Augur Pact and Primed Slip Magazine, with the latter being an okay-ish choice if you’re having trouble with your ammunition economy.

Sometimes having a lot of elemental damage isn’t really your best choice and even though you could just pick another secondary weapon in those cases, we’re going to present to you another build you might want to consider.

It looks very similar to the standard build above, but instead of two +60% status chance mods you’re going to pick Stunning Speed for a little bit more status chance and especially for the faster reload.

Pummel is also a good way to increase your Impact damage, which substitutes the missing status damage.

You still do have Blast damage and you also get some extra Heat damage, combined with the increased Impact damage.

That way you could bring the Akarius to the Profit-Taker Orb fight and have three status damage types in one weapon. Or just play it against Corpus or Machinery units and use the Blast damage for some extra crowd control.

The Akarius is an interesting weapon with some really good ideas, but also some weaknesses. The slow reload speed can somewhat be countered by using the right mods, but the homing part will make it nearly impossible to get headshots, because the rockets are aiming for the torso.

It is also hard to kill enemies that are inside the ten meter radius, so you often times need to run around, trying to get a good positioning.

That said, the explosion damage is really great, the homing part feels super strong if you’re killing enemies farther away. The innate Blast damage is also very useful as long as you don’t accidentally jump into the exploding rockets and knockdown yourself.

If you think we’ve missed some important information or if you want to ask a question, feel free to leave us a comment and we’ll get back to you!