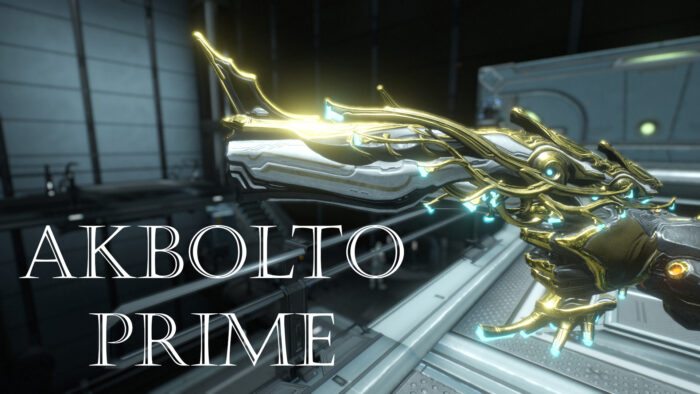 While the primed version of the Akbolto does have a lower base damage and even a slower fire rate than it’s normal version, choosing the Akbolto Prime as your secondary weapon is always a great choice.

The pistol does have the highest critical chance of all pistols in the game and also features a faster reload time and a larger magazine size than the normal version, while also having a good status chance.

So you get a lot of different possibilities to start your Akbolto Prime build – or simply find different versions you pick depending on your mission.

Playing with the weapon might feel a little bit weird, because it doesn’t have a rapid fire mode. Instead you are forced to click for every shot while you also need to account for the projectile travel time.

But once you start to get a feeling for the weapon it will be super strong, especially if you plan to fight higher level enemies or even assassination targets.

Just make sure to use one of our builds or develop a better one suited to your needs.

As usual you really want to build around the different advantages of a weapon while trying to combat the disadvantages of it.

The Akbolto Prime luckily only has some minor problems, so you don’t really need to counter them with your mod choices. Instead you can (and should) try to fully use it’s potential and find a good build you really like.

While Barrel Diffusion, Lethal Torrent and Hornet Strike are usually used in every secondary build out there, you should know about the strength and weakness of Magnum Force: The mod will obviously increase the damage output with your Akbolto Prime weapon by a lot, but does come with an issue.

The reduced accuracy isn’t really notable if you shoot at enemies at short or mid range, but will make you miss mobs on farther away distances.

Especially on open world maps you will need to spam more shots to hit those enemies.

That said, the advantage of the damage increase is too strong, so you really don’t want to miss out on using the mod.

This will probably where you end up if you are looking to find a standard build for your Akbolto Prime.

Primed Pistol Gambit alone will increase the critical chance to more than 100% and Primed Target Cracker should also be an auto-include in your build.

If you don’t have those primed mods yet, use the normal version and change them once you’ve acquired (and maxed out) the primed mods.

To make this build a ‘hybrid’ version you will need to add two 60% status chance mods of your choice, which will nearly double the status chance up to 64,3%.

The other four slots should already be occupied by the four mods mentioned above.

If you want to change the build around, you probably want to either cut Lethal Torrent or Magnum Force and try out Bore and No Return – just in case you need to bring more Puncture damage into a fight.

You could even think about including Hydraulic Crosshairs for the extra critical chance.

Have you ever wondered how fast you can actually press your fire button? Well, if you try out this more casual oriented build you might find out where your limits are.

The build itself looks pretty similar to the standard version, but instead of two elemental mods you will be using Anemic Agility and Gunslinger to get a very high fire rate (in combination with Letha Torrent).

The trick here is to fire as many shots as possible in a short amount of time.

While this build is weaker than the standard hybrid version, you can bring it into missions where you need to kill enemies that require you to fire more than just a few shots – assassination targets for example.

But even bigger mob groups can be quickly destroyed by shooting a lot of projectiles into the group.

The Akbolto Prime is a really great weapon, especially because of the super high critical chance.

The main ‘problem’ is that you don’t have an auto-fire mode like the Akstiletto Prime has, which means that you have to click once for every shot.

That can be somewhat annoying and the classic ‘spray and pray’ mode won’t work here.

But if you give it some time and play around with the secondary until you get a feeling on how and when to shoot you should be fine.

Make sure to try out one of our builds or develop your own build – and share it with the world by leaving a comment here!