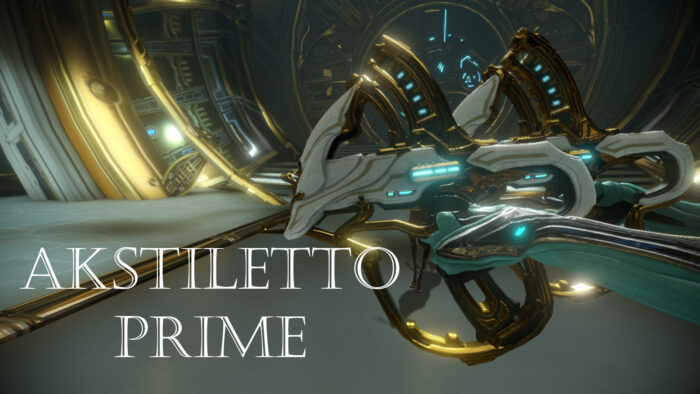 Picking a good secondary weapon always feels somewhat clunky, because you want it to do something different than your primary weapon, but it should still be able to deal decent damage.

The Akstiletto Prime is one of the best choices in the game and especially the combination of high critical damage, a good base damage and a very fast fire rate make it the optimal addition to almost every loadout.

Are you playing a shotgun or a blaster weapon and also need something to quickly dissolve huge groups? Or do you need a secondary weapon that counteracts the problems coming with a sniper rifle?

Akstiletto Prime is the optimal choice in a lot of situations and will not only deal huge amounts of damage, but can also help you out while you simultaneously level up your other weapon slots and your Warframe.

Especially the large magazine makes this weapon a very strong choice for every situation and therefor one of the best weapons in Warframe.

So try to get your hands on that secondary, follow this guide and feel great while destroying weak and strong enemies alike.

The Akstiletto Prime is one of the strongest secondaries, no doubt.

That is the main reason why the Riven disposition is so low and why you don’t really need to try to get a Riven mod for this weapon.

If you get lucky and find one with a strong roll – great! But you don’t need to invest Platinum or time into trying to get one of those.

Rather spend your time to get the mods needed to make this weapon even stronger and upgrade them as high a possible!

Getting Primed Target Cracker and Primed Pistol Gambit can be very expensive – in credits and Endo as well as in Platinum.

But they are worth it and will be used and almost every secondary weapon you’re going to play.

So at least think about investing in these or keep an eye on Baro next time he comes around.

The standard build is pretty straight forward and you hardly find any surprises here. You should always use two 60% status chance mods and change them regarding the expected enemies.

Corrosive damage is always nice, but changing the damage type can be super effective, especially in higher level missions. The only debatable mod is Convulsion, which can either be switched out for Pathogen Rounds (or any other elemental mod, depending on your chosen damage type) or Pummel.

The latter one will increase your already high Impact Damage a lot and therefor directly influence your damage output.

You might also take a look at Augur Pact or Hydraulic Crosshairs, depending on your play style and the chosen Warframe.

Especially Augur Pact can be very beneficial, but can also become super useless. So if you want to swap it in and out every time you switch your Warframe, go ahead and do so.

If you can’t be bothered with that, just play Convulsion or whatever mod you like most.

This build features all the great mods from the standard build, but also uses all four +60% status mods.

While your damage output in general is a bit lower in this build, playing it against higher level enemies, assassination targets and boss mobs feels very nice.

If you build the Akstiletto Prime this way, you’re getting 100% status chance, meaning every shot you hit will instantly proc all your damage types.

If you rather have a faster fire rate, switch out Barrel Diffusion for Lethal Torrent and you’re good to go.

Also don’t forget to bring some form of ammo transmutation (Carrier (Prime) should be more than enough), so you don’t run out of ammunition against targets with a high health pool (e.g. boss enemies).

The Akstiletto Prime does feel super strong and especially against large mob groups you will be able to quickly dissolve them into whatever they are made of.

Yes, you do need to have an eye on your ammo reserves and from time to time switch to your other weapons of you’re using your secondary weapon as your primary damage output, but that usually only happens if you don’t bring a Carrier as a companion.

Other than that, you will be able to kill everyone and everything in your way with this weapon – after you put some Forma into it.

Because without 4 or 5 Forma you won’t be able to use the Akstiletto Prime to it’s fullest potential. But if you’ve done with that it will be totally worth it.

So go ahead, craft the weapon and be amazed by the damage output it will deliver!