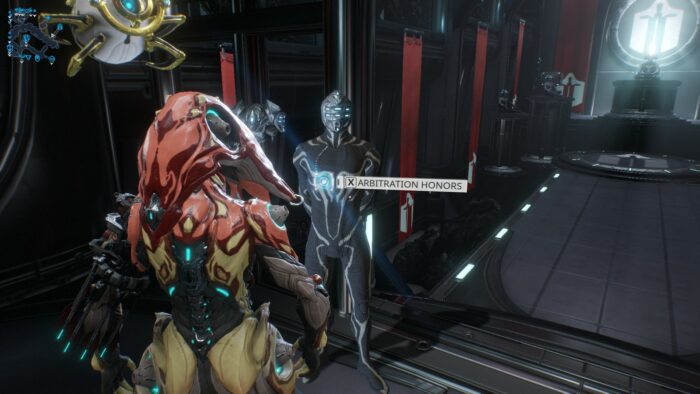 The Arbitrations is a special game mode that is directed to the more seasoned player base and shouldn’t be attempted until you really know how to beat a given game mode.

One requirement is that you can only join Arbitrations missions with a fully maxed, level 30 Warframe. The other one is that you need to have done every mission on the star chart at least once – so even if you want to join Arbitrations during your early days of Warframe, you won’t be able to.

And that’s a good thing, because Arbitrations can be very hard, especially if you don’t come prepared. They are basically elite versions of the different endless modes.

By the way, if you don’t know how many mission nodes you need to unlock before you are able to join Arbitrations missions, simply visit the Arbiters of Hexis Syndicate on any relay (doesn’t matter what standing you have with them) and talk to the ‘Arbitrations Honors‘ person (close to the entrance of the room).

They will tell you exactly what you need to do to unlock Arbitrations. Later on they also offer rewards based on Vitus Essence, which are rewarded from the Arbitrations mode.

There are some special conditions that will make sure that you are going to have a hard(er) time running through Arbitrations missions.

They are also the main reason why this mode isn’t directed at newer player, because you really need to know what you are doing and bring some good Warframes and weapons if you plan on staying long enough to get the rare rewards you want and need.

Even though the missions will change (different endless mission types, different enemy fractions) the following rules and mechanics will always apply:

This rule is very important to keep in mind. Usually the rotations are ‘AABC and repeat’, which means if you want to get the C-rotation reward on a defense mission, you’ll get it every 20 waves (on wave 20, wave 40, wave 60, etc.).

In Arbitration the rotation is AABBCCCCC, with the C-rotation repeating itself until the mission is over.

Since the rewards on C-rotation are most likely what you want, staying a long time in the Arbitrations mission is a good idea.

Additionally to the normal enemy spawns you will also encounter special drones during your runs.

These drones basically work like a Shield Osprey, but instead of boosting the shields of the enemy, the Arbitration Shied Drones will grant a special shield that nullifies all and every Warframe ability influence on enemies as well as damage.

So in order to kill mobs you first need to kill these drones. They also do have a small chance to drop Vitus Essences.

In Arbitrations you don’t have a bleedout phase, but instead you will instantly die and can’t revive on your own. That means if you die while playing solo, you are dead for good and the mission will fail.

If you play with team mates however they are able to revive you by picking up Resurgence Tokens. They are a guaranteed drop from the Arbitrations Shield Drones and will give each player who carries the points the Resurgence Burden debuff, which will constantly drains energy and reduces health as well as shields based on the number of points carried.

Once your team brings five points to the tower that indicates the point where you died, you will instantly get revived and can keep on playing.

There is no maximum number of revives, so you can basically be revived indefinitely.

To make Arbitrations even harder there a special conditions that apply to the different endless missions: Excavators need 180 seconds instead of 100 seconds to finish.

Life support capsules in Survival are only worth 75%, in Defense the defense target is replaced with an operator that runs through the map (can’t be revived and death will instantly fail the mission).

And Interception towers will fill twice as fast as usual if controlled by enemies and rescue targets during a Defection mission can’t be revived.

It is also important to note that you don’t get any rewards if you abort the mission, but if you and your whole team die or the mission failed because of other reasons, you will still get all the rewards gained from rotations – but you will lose everything else gathered during that time (e.g. resources, mods, Endo, etc.).

Each mission also offers a special bonus for one random Warframe (always +300% ability strength) and one random weapon (always +300% damage), so bringing that Warframe into the mission might be very strong, but since it is random you often times just ignore those extra boosts.

So why would you even try and run Arbitrations even though the mission is clearly pretty hard and more of an endgame content rather than directed and early and mid game players? Well, of course because of the rewards.

Not only can you get a lot of Endo (in form of Ayatan Sculptures and actual Endo), but you also might get your hands on an Aura Forma blueprint (Aura Forma will allow you to use any aura mod in your aura mod slot without a penalty), on some rare and exclusive mods as well as the Seeding Step Ephemera blueprint.

Here is the rewards list, neatly arranged for your reading and viewing pleasure:

As you can see the chance to getting Endo or Ayatan Sculptures is fairly high, but especially if you manage to stay a couple of C-rotations you should be able to finally get your hands on everything you need and want.

Even though Adaptation is probably the most-used rare mod from Arbitrations, all the other mods are still fine and great if you want to experiment with your builds.

Another reward you will get for every rotation completed in Arbitrations are the so-called ‘Vitus Essences‘.

Each rotation will reward one Vitus Essence and you can buy those from the Arbitration representative on every relay, close to the entrance of the Arbiter of Hexis Syndicate (inside the syndicate room).

Just talk to the person right there and browse through the inventory.

Besides a few cosmetics for weapons and your operator you can also buy Archgun Riven Mods (veiled), Cautious Shot and Power Donation as well as the Ayatan Amber Star blueprint.

The latter will allow you to craft the rare Ayatan Amber Star (used to make your Ayatan Sculptures more valuable) by using your more common Ayatan Cyan Stars and Vitus Essences.

Talking about the best loadout for these missions isn’t really a matter of just naming a few Warframes and weapons, but you really need to understand the different mission types.

A Frost might be a great pick for Excavation missions or if your team wants to camp on one spot/room during Survival, but if you pick him for Defense, you will constantly have to recast your globe, because the defense target is moving around the map.

Bringing a squishy caster frame (e.g. Ember or Banshee) is also not great because you will need to kill the Arbitrations Shield Drones before your abilities start to be useful.

That said, we will give you a more general approach on what to pick for Arbitrations:

We really can’t stress enough that it isn’t bad at all to sacrifice some amount of damage for more survivability.

Doesn’t matter if you play solo or with team mates, in the end you will get into trouble if you do die a lot.

So please make sure that your chosen build isn’t too squishy and keep on improving your knowledge and play style!

There isn’t really one single weapon recommendation for Arbitrations, because in the end you are free to play whatever you want and like.

You should however always make sure to bring a weapon that can quickly kill the Arbitrations Shield Drones or you will have a hard time.

Grenade Launcher (e.g. the Tonkor) are a bad pick, because most likely won’t kill the drones with that weapon.

Instead try to bring something with a little bit more steady area-of-effect damage like the Ignis Wraith or a high damage shotgun.

Rifles with a high magazine size (the Soma Prime is a great choice) are also good, but keep in mind that the Arbitrations Shield Drones sometimes have erratic movement or hide behind enemies, so rifles often times have a harder time to kill them, especially on close range. Your own movement and Warframe placement is key to success here.

Arbitrations is a hard mode that is aimed more towards endgame content, but that is totally fine.

You will eventually get to a point where you played through the whole star chart, gathered a few different Warframes and weapons and get your first endgame builds done.

That’s the perfect time to jump into the first Arbitrations, start gathering more and more Endo and complete more and more builds.

Arbitrations is especially hard for newer players, but once you start understanding how you can shine in the different modes, what Warframes and weapons get the job done and what mistakes you shouldn’t repeat, you will easily get a lot of C-rotations done.

If you think we missed some important information or if you simply want to express your opinion, don’t hesitate and leave us a comment!