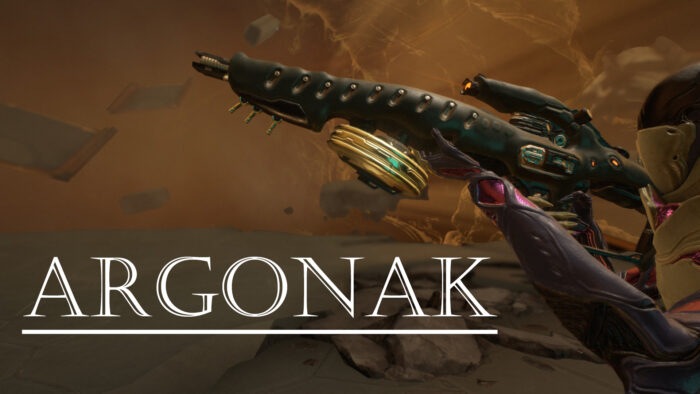 The Argonak is an assault rifle, developed by the Grineer and now used by your own Tenno hands. The rifle does have the special ability to highlight enemies in range, which makes the visibility of those enemies way better – especially in darker environments.

You can also freely switch between a semi-auto mode and an auto mode, giving you the ability to either use precision or the old ‘spray and pray’ approach.

While the automatic mode convinces with a higher fire rate and an increased status chance, it also sacrifices critical chance for those stats.

The semi-auto mode however has a pretty good combination of status chance and critical chance, so building for hybrid seems like the right choice here.

Buying the blueprint for the weapon might either be easy or more complicated – always depending on how far your clan is with the research.

The blueprint needs to be researched in the Chem Lab after the research for the Grinlok is done. Since you also need a Forma to craft the Argonak, getting it during the earlier stages of the game is probably not easy to do – and also not recommended.

It is important to note that the Argonak has two different fire modes that impact not only how you play the weapon, but also how you will (or rather ‘should’) mod it.

If you prefer the semi-auto mode you do get to play with a higher critical chance, but you will also have to adapt to the slower attack speed.

But if you do play with the full auto-mode instead, you don’t get the bonus of the high critical chance, so using mods that increase critical chance or damage aren’t worth the mod slot.

The general rule here is that you really want to bring and use the automatic mode if you’re expecting to fight big groups of enemies at once, while the semi auto mode is fairly strong against single target enemies – e.g. assassination targets, capture targets or something similar.

You could also just play whatever you like most, because in the end it always comes down to personal preferences.

This build utilizes a great status chance with the high critical chance you’ll get if you decide to play with the semi auto mode: Playing a hybrid build also means that you don’t really have a lot of space to play around with.

You already want to use Serration and Split Chamber on (almost) every rifle in the game. Point Strike and Vital Sense are the bare minimum for every critical damage build and you do need to use two +60% status chance mods to get as much status chance out of your build as possible.

So you only have two more mod slots to use and bringing in Vigilante Armaments for more multishot in combination with the really nice damage increase of Heavy Caliber seems to be the right call.

You don’t really get any problems with the reduces accuracy, so getting the extra damage is great. If you rather use another mod, switch it out for Vigilante Armaments, which is your weakest mod in the build and can easily be replaced with anything you like.

Especially Argon Scope and/or Bladed Rounds might be what you are looking for.

This build is suited for the full auto mode play style. So make sure to switch your weapon to the right mode and start spraying your bullets. The idea here is to fully ignore the critical chance (which is fairly low) and go ‘all in’ on the status chance.

With just two +60% status chance mods you’ll be able to get the weapon up to a 89,5% proc chance, which is more than enough.

Increase the damage output by using two elemental mods (usually you do want to pick the same elemental damage you used on your +60% status chance mods).

By picking mods like Crash Course and Fanged Fusillade in case you rather have more Puncture and/or Impact damage – for example if you plan on bringing the Argonak for the Profit-Taker Orb fight.

Even using Primed Fast Hands (or the normal version) wouldn’t be the worst, because the reload time is fairly high.

The Argonak is a decent rifle with a good damage output. It won’t carry you through the whole endgame and especially high armor enemies can be trouble, but until you start fighting enemies with level 85+ you shouldn’t have any problems killing everything that moves.

If you are already in a clan with the research done, we recommend just building the weapon, putting some Forma into it and just try it out.

If you think we’ve missed some important information or if you simply want to share your own build, don’t hesitate to leave us a comment!