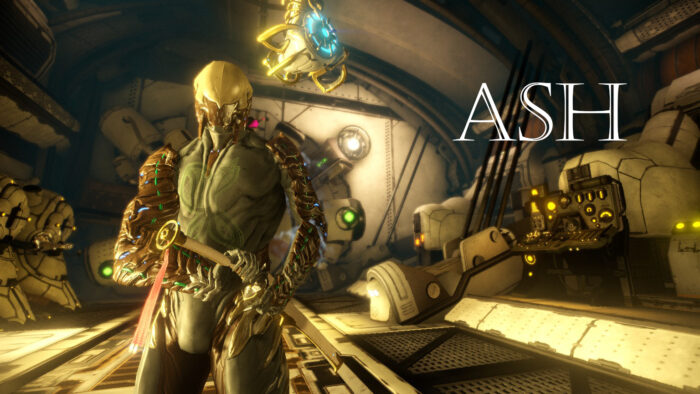 Ash is one of the first Warframes ever released and changed quite a bit over the years. Sadly, nowadays Ash isn’t really used all that much and you rarely see him in random groups and even less in premade groups.

This is mostly due to the fact that his skill set is really really REALLY slow. Unless you play solo, most of the time your enemies are already dead before you can execute your combo.

But as one of the first space ninjas Ash has a really cool and unique skill set that in its core describes really well what Warframe used to be – an assassin based action game with lots of killing.

If you do want to know more about how you can get your hands on this Warframe, we recommend reading through our ‘How to get Ash’ guide!

Since the skill set is heavily depending on Ash either closing in really fast to melee attack the enemies or to get up to an advantage point you probably need a good amount of survival mods – at least always try to have Vitality in your Warframe.

You’ll probably also always use Steel Charge, since most of your abilities scale with your melee damage. To be fair you can try out some crazy build ideas, but there is usually just one main build.

Tip: If you want to know more about Ash and his abilities, feel free to take a look at the wikia page!

This build allows you to maximize your damage output of Blade Storm. In order to do so you want a good mix of ability strength, ability range and efficiency.

If you want to combine it with your invisibility ability Smoke Screen you can drop some efficiency and get more duration. Casting Blade Storm while being invisible cuts the energy cost in half, making duration as meaningful as efficiency.

This build uses the maximum amount of ability strength. That way Ash will be able to quickly kill even level 120+ enemies. You’ll only need two forma, which makes this build also useful for new players.

You can use this build for a lot of different mission types as long as you have enough time to mark your enemies and not die while doing so. Therefor open space is really important, while tight corridors are an impediment.

So try this build in an defense mission, on excavation maps, in a survival run or while doing a mobile defense.

As long as you have the chance to stand still for a few seconds without your enemies getting killed by your allies (e.g. in exterminate missions or during a Sanctuary Onslought) you will deal a lot of damage.

So you don’t have a Loki or an Ivara Warframe and you still want to be able to stealth your way through a spy or rescue mission or just want to be a sneaky assassin?

Then pick this Ash build and have fun while doing so! You need a good amount of ability duration to be invisible as long as possible.

Rush helps you to be faster while running through the mission and Rage is just there as a filler.

You can easily use the augmented mod Smoke Shadow and support your allies…or get some ability strength if you want to be more versatile.

I use a lot of extra range mods in order to either stagger more enemies if needed or to use my Teleport skill more often.

Teleporting fast to another enemy or to an ally also improves your mission speed and can have other great benefits, especially in stealthy missions.

Depending on where you want to use it you can switch out Rage with Blind Rage, Energy Conversion or even Primed Continuity for an even more versatile build with Smoke Screen’s invisibility.

Since Seeking Shuriken lowers the enemy’s armor by 70% you probably want to use it in harder missions, like a Neo or Axi type. Sorties also might be a good place to start, as long as you know what you are doing.

If you are playing with a (random) team, try to spread your Shurikens a bit – the more enemies with low armor the better!

Last but not least I want to show you a neat little build, centering around Teleport and its augmented mod Fatal Teleport.

You need a lot of ability range, as much efficiency as you can grab and also a really strong melee weapon with a good finisher move.

I do prefer Galatine Prime, but you can probably try out a lot of different melee weapons – if you want to quickly teleport between enemies, you should get a fast weapon with a fast finisher move.

You can try this build out in almost every mission type, since teleporting around and killing mobs seems to be a good way to go in Warframe missions.

Ash has a really fun skill build You can utilize every ability in some way and he really feels like a space ninja assassin. Sadly, his Blade Storm ability is just way too slow.

Marking a lot of enemies before you kill them isn’t really effective and in a lot of missions your allies will already have killed your enemies – or you get shot to death before you can execute your foes.

But if you can get up to a high advantage point you might get a good amount of kills in.