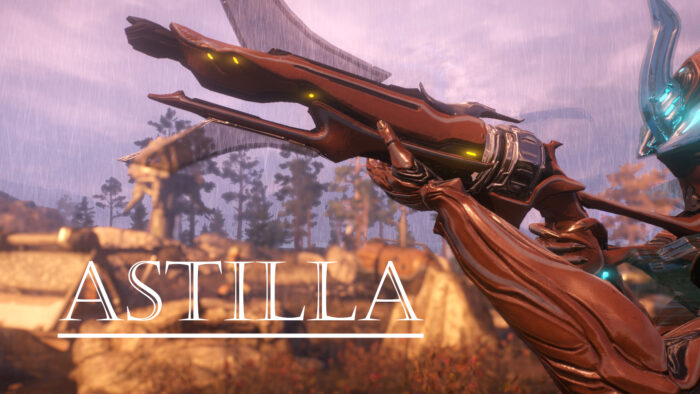 The Astilla is not only a decent shotgun, but also Gara’s signature weapon. The Warframe has a glass theme and so no one should be surprised to learn that the primary weapon fires glass slugs which do have a small explosion radius.

The Astilla deals mainly Slash damage, some good Impact damage and has a fairly high status chance as well as a good critical chance. It also has the highest accuracy of all shotguns in the game.

That said, it also features the third lowest base damage of all shotguns, which obviously isn’t great for a weapon that usually want to only use one or two shots to kill enemies.

To counteract the low base damage the weapon brings a fast, automatic fire mode, so instead of using few shots against higher level enemies you rather fire a lot of bullets.

Since each shot uses one slug and not multiple ones (for example like the Tigris Prime does) you don’t necessarily need to reach 100% status chance to get those procs going.

To buy and craft the Astilla, simply head to the ingame market and buy the blueprint for 20.000 Credits.

We will show you two different builds in this guide, but treat them as a basic for your own ideas and feel free to expand!

As mentioned above, even though the Astilla has a very high status chance and can even reach 100%, you don’t need to build it for that.

In the end you are free to experiment around and find the version that suits your own play style and the missions you’re going to fight through.

Either way we need to inform you that you can hold an additional 80 reserve ammo if you’re equipping the weapon while playing with Gara.

Since the ammo efficiency isn’t the greatest and you can only hold 112 rounds unless you’re playing with Gara we highly recommend bringing either a Carrier or some other form of ammo conversion.

Otherwise you might see yourself searching for ammo drops, especially while fighting higher level enemies.

Even though you already get a very high amount of status chance with just two +60% status chance mods, putting all four into the weapon will guarantee that every shot will proc your status chances.

You don’t necessarily have to go for the combination of Corrosive and Blast damage, but with the small explosion radius of three meters, every enemy hit will be blasted and therefor crowd controlled while also having the armor reduced.

But of course you can (and should) always pick whatever you like and need for your missions.

The build itself isn’t really all that complicated: Primed Point Blank is great, but even the normal version is an auto-include in every shotgun build.

Hell’s Chamber adds a good amount of multishot and Vicious Spread is super nice, simply because it increases your damage by a lot while not really giving you a big disadvantage.

Even though the accuracy gets reduced, you start with a high enough number that you won’t really see a difference while playing.

The last mod slot is used for Primed Charged Shell, but if you don’t own the primed mod you can either pick any normal elemental mod or try out something like Vigilante Armaments for more multishot or an IPS-mod to either increase Puncture or Impact damage.

If you’re not really into the full status build you probably end up playing the hybrid version.

Hell’s Chamber and again the great Vicious Spread mod are here to increase your damage output by a lot.

This time we used the last mod slot for Vigilante Armaments, but then again you can pick either an IPS-mod, an elemental damage mod to increase your damage output or even think about playing something like Critical Deceleration, Laser Sight or Nano-Applicator.

It really depends on your own play style and preferences, so feel free to try out all the different mods and pick whatever you like most.

The Astilla might not be the best shotgun in the game, but she does have a fairly unique play style and especially if you are into Gara and his glass theme, you really want to try out this shotgun.

You can easily replicate our builds from above by just using two or three Forma, so there isn’t a big investment to make if you are curious how the weapon plays and if it is strong enough to carry you through the game.

Always feel free to leave us a comment if you found another build or if you think we missed some important information!