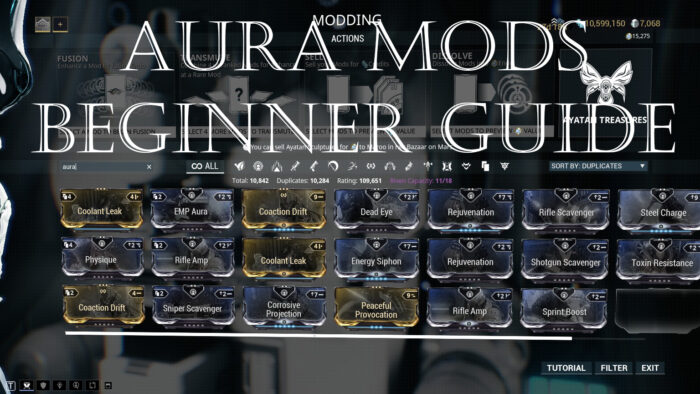 Aura mods are an essential and very important part of every Warframe build. Not only do those mods give really strong bonuses for yourself or your whole team, but they also generate additional capacity for your mods.

How much capacity is generated depends on the aura mod itself and on the polarity of your aura slot. So if you put a mod with five drain into a aura slot with the same polarity, you will get additional ten mod capacity.

If you put it into a neutral aura slot (with no mod polarity) you’ll get five capacity points, while an off-polarity will reduce the extra capacity to 80% – so a mod with five drain will give you four capacity.

That is very important for your late game builds, since you want to get as much capacity as you can. Picking the right aura mod for your preferred Warframe isn’t always easy, since there are multiple solutions to a given problem.

This guide will give you a general overview and a few pointers, but you should always keep in mind that there isn’t usually just one right choice.

This guide is gonna use a tier selection to categorize every aura mod in the game.

This is somewhat subjective, but every choice is verified by fact and explanations. If you feel like a mod should be a higher tier or lower tier – that is totally fine.

Also while some Warframes or certain builds will need a “lower tier” aura mod that does not mean that mod is used in any other build.

And if a mod is in a lower tier bracket it isn’t bad or unusable (with a few exceptions), but rather for specialized uses. So don’t sell all your aura mods!

There are a few aura mods that are super important and that you should aim to get as fast as possible. They will help you greatly in your endeavor to beat the game and to progress through harder missions.

Often times premade groups also demand certain aura mods to min-max a mission and to get the best shot at it.

Reducing the enemy’s armor is very strong and will make sure that your weapons and abilities can deal more damage.

Since aura mods do stack you can reduce enemy armor up to 100% (capped!), if you have a team with four Corrosive Projection in it.

This mod is probably the best aura mod in general as long as you don’t want to use a more specialized build.

Steel Charge is the best aura for every melee build (with very few exceptions) and will increase your damage output by a lot!

This mod is also very important for certain Warframes and can boost their skill damage with it – a few examples are Ash or Atlas.

But a lot of Warframes do have melee builds as well and just want the extra damage for the melee weapon boost.

While it’s power level isn’t on the same level as the other two’s, Energy Siphon is still one of the most used aura mods in the game.

Mostly because regenerating energy over time is very powerful in caster builds and can make a huge difference in harder missions.

Keep in mind that you won’t benefit from the regeneration bonus if you are channeling abilities – good examples are Ember’s World on Fire, Chroma’s Effigy or Revenant’s Danse Macabre.

This aura mod is borderline tier 1 since you usually don’t need it in premade groups, with strong builds or if you do have decent survival mods.

It is very good though if you combine it with Vitality and is often used by tanky Warframes like Nidus or Inaros.

Rejuvenation is also very strong during early and mid game, since it does give you additional survivability.

It also helps a lot against toxic or slash damage and will save your butt more than once.

Tier 2 aura mods are still very strong and useful, but are usually used by more specialized builds or for certain mission types and just lack the ability to be great in general.

You can experiment with those mods and feel free to include them into your build if you are trying to min-max your damage output.

This aura mod is often used in Eidolon Hunt teams and can increase the Sniper Rifle damage output by up to 210% if everyone in your team uses it.

That is super strong against the high armor enemies and will quicken the process of killing those beasts. Same can also be true against different boss enemies in assassination missions or during events like the Razorback Armada.

Just make sure to talk with your premade team to get the maximum bonus of Dead Eye – if that’s what you are looking for!

Certain caster builds do use Growing Power to get an extra damage boost. This is especially strong with channeled abilities since they will keep the 25% buff if you activated them during the six second buff period.

For example: You get that status proc and activate World on Fire with your Ember. As long as you keep this ability active, it will deal 25% more damage.

Don’t forget that you need to proc the status with a weapon, since Warframe ability procs do not count!

If you really love to play with your secondary or if you want to boost your Mesa you probably want to use this mod. It also works with Titania’s Warframe weapons!

Sometimes you want to use Pistol Amp during harder sortie missions where only secondary weapons are allowed.

Aura mods in this tier are rarely used and lack some sort of extra bonus or plain strength.

They are either too weak to be used more often or are just way too specialized and only good in a very few selected builds or missions.

Unless you don’t have better alternatives yet you probably don’t want to use these.

Getting a bit more survivability is always nice and if you don’t have a Warframe or team mates that already give you overshields, picking Brief Respite will help you out a bit during your early missions.

You do want to use it on a Warframe that can actually spam abilities. Also try to combine it with Redirection for even more overshields!

Very rarely you do want to see the enemies on your radar before you encounter them – or just to get a better chance of finding them.

Especially on Plains of Eidolon finding enemies can get somewhat confusing and during nightmare missions you want to find your enemies before they can shoot at you. Enemy Radar can certainly help in those situations, but is generally speaking not worth using.

Are you hunting for certain mods or resources? Loot Detector will help you not to overlook dropped items and also gives you a visual aid during missions for breakable containers or lockers.

Usually you just want to use Vitality and Rejuvenation for more survivability, but if you don’t have the latter, Physique will help you out with additional health and survivability.

But once you have better aura mods, go ahead and switch to those.

If you are still in the early stages of the game, boosting your rifle can help you out quite a bit and boost your damage output.

Especially if you want to fight boss mobs or higher level missions you can pick Rifle Amp.

Combine this aura with Rush and/or Volt’s speed buff and you can rush through capture or rescue missions.

Sprint Boost will save you a few seconds, but generally speaking you rather have any other aura mod.

So if you play a tanky Warframe with high armor (like Rhino or Chroma), you can gain some good armor points with Stand United.

This tier can be described as dumpster tier, since all the aura mods mentioned here are just way too bad to ever be used.

Yes, you can experiment with them and see for yourself, but most likely you’ll come to the same conclusion: They are just way too weak and shouldn’t be used at all.

Pistol Scavenger, Rifle Scavanger, Shotgun Scavenger and Sniper Scavenger might seem like a good idea at first, but you really should use a better aura mod.

If you do find yourself having problems with your ammo you can use weapon mods that will help you with that (e.g. Pistol Ammo Mutation or Trick Mag for secondary weapons).

It is highly recommended to use Carrier (or its primed variant) in order to help yourself with ammo problems!

EMP Aura, Infested Impedance, Toxin Resistance and Shield Disruption are targeted at factions (in one way or another) and are just too weak to be used.

You also would have to change your aura mod every time you started a mission with a different fraction, which would be way too bothersome.

At the first glance this aura mod doesn’t seem too bad, but draining your shields when you are using a melee build is super awkward and just not viable.

You’ll going to get downed way too fast. So please, do not use Empowered Blade.

While the other Amp-variants are good or at least usable you don’t want or need Shotgun Amp. Shotguns already deal a huge amount of damage, so the extra 18% aren’t gonna change a lot.

You should rather use a survival aura if you plan on playing shotguns, since you need to get closer to the enemy due to the shorter weapon range.

Speed Holster: Just a bad aura. Even if you are constantly switching your weapons you still don’t want Speed Holster.

Aura mods are a big part of your Warframe builds, but always going with the meta isn’t fun for everyone.

Feel free to experiment with the different mods and use this guide as what it is: A guideline.

You do need to find out for yourself what works best for you and your play style. Also don’t forget to have fun while you’re doing so!