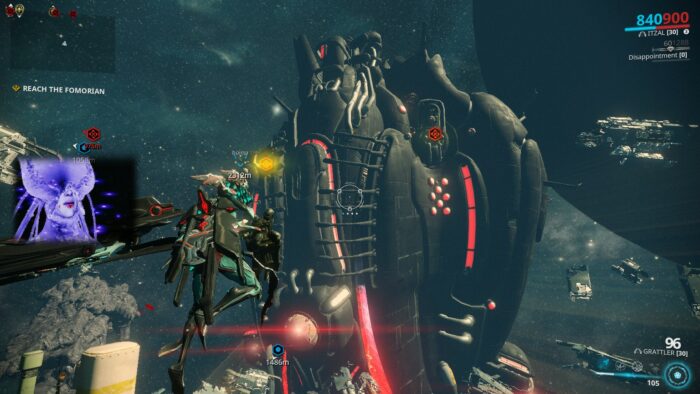 Every few month Digital Extreme gives its player base access to the Balor Fomorian event. It is mainly an Archwing missions, so get your loadout ready for that.

The main reason you shouldn’t miss this event aren’t the okay-ish rewards you get for your first completion (200.000 credits and an Orokin Catalyst), but all the other drops you get from defeating the boss.

Now, you might say that you don’t like Archwing and that Archwing is irrelevant for your Warframe experience – and you would be fully in your rights to say that.

But if you stay with the game for a long time you eventually reach the point where you want to complete your arsenal and then you will need the extra Archwing weapon.

Also, since Digital Extreme introduced the Archgun Deployer and a very hard fight on Orb Vallis, using the Imperator Vandel is extra beneficial.

So get yourself in the event if you ever manage to see it being live!

How To Get Fomorian Disruptor

In order to start the event (and run the mission), you do need to have a Fomorian Disruptor equipped in your gear wheel.

The blueprint will be given and added to your inventory every time the event starts (so every few month), but you do have to craft it for every run you want to make.

And while it only takes one minute to craft the Disruptor, getting all the required ingredients might be more troublesome than you might think at first.

To craft one Fomorian Disruptor you need:

Most player will only have problems with the Omega Isotopes, which are a resource made up only for this event.

Gathering those requires you to run non-Archwing missions on any planet with an active Balor Fomorian.

Meaning: When the Star Chart tells you, that the Balor Fomorian is currently located at the Kronia Relay on Saturn, running non-Archwing missions on Saturn will give you those drops.

They are an uncommon drop from every enemy you encounter on that planet, so running endless missions and a farming related Warframe is a good idea.

You can simply farm up until you have more than enough (remember: you need 4 Omega Isotopes per Disruptor!) and then start crafting the blueprint.

And don’t forget to actually put it into your gear wheel once you’re done crafting. You only need to equip it once, not every time you crafted one of these!

Generally speaking, it doesn’t really matter what Archwing and weapon you bring, just make sure that you’re not dying against every enemy you’re going to face.

But if you are looking to optimize your loadout, you probably want to use something like this:

You might even want to bring some health restores, in case you’re trapped and need to regenerate yourself.

Simply equip those into your gear wheel and have them ready if you need extra health regeneration.

The mission itself is pretty easy if you know what you are doing. First of all you and your Archwing need to fly towards the yellow missions marker.

Try to dodge the Zeplens and their energy nets, or you will be trapped until you killed off the Zeplen that is currently casting the net (a big, red energy field around you).

If you manage to get your hands on a maxed out Itzal, simply blink away, otherwise you might need to take care of all the other enemies around you first, since they can deal quite a bit of damage to you while you are trying to get free.

Once you are near the Balor Fomorian, you need to kill the two shield generators.

They are on the upper left and upper right (just follow the red mission marks) and have a cap, that needs to be destroyed first.

If you’ve done that, the shield generator core will move out of it’s cover and can be demolished, which will turn off the energy shield surrounding the Balor Fomorian.

Now you can fly back towards the lower middle, find the entrance and get inside it.

Now you have 30 seconds to destroy all 16 nodes of the core, which shouldn’t be a problem with a four-man-team. If you fail, you can simply activate another Disruptor.

Also don’t forget that you can’t use your Archwing skills inside the Balor Fomorian, so use your weapons to kill enemies that are shooting at you.

Once you killed all 16 nodes, get out the same way you got in and fly away as fast as possible.

You need to get out of the 350m blast radius. You don’t have all that much time, so once you see you’ve successfully killed every node, just get out.

The Balor Fomorian is a fun-to-play event that doesn’t require much skill or knowledge.

To be honest, you don’t really need a super overpowered Archwing build or a super strong weapon, but it does help to minimize problems and quickly get rid of Zeplens and other enemies.

Also it will reduce the mission time to just a few minutes, so running it over and over until you have every drop you want doesn’t feel like an eternity.

The event usually is available for about three days. But don’t worry: If you missed it the last time, it doesn’t matter all that much.

The event will come back in a few month and you can do it then. The rewards are nice, but not overpowered and are usually only worth it if you are into Archwing or if you are looking to complete MR levels and your collection.