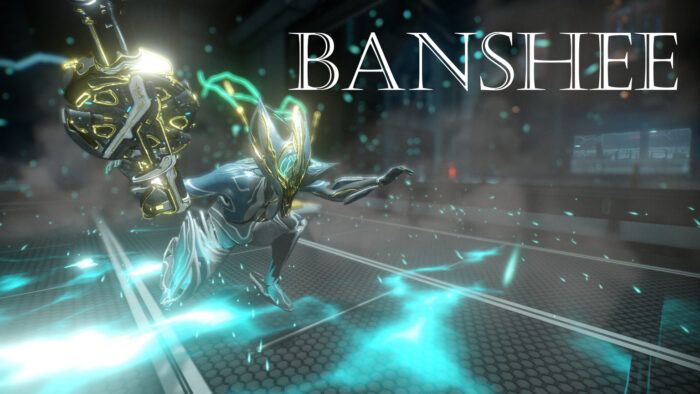 Banshee was one of the first new Warframes in the game and was released in early 2013. She has strong acoustic powers and uses her voice to either damage the enemies, weaken them or even stun them.

She used to be one of the strongest and most played DPS Warframes in the game until her augmented mod Resonating Quake got nerfed in Update 22.

She is still one of the best area-of-effect Warframes out there, but lost her top spot to other Warframes like Mesa or Saryn – especially if you don’t have a Trinity in your group.

But if you use Banshee in a premade environment or build her around her second ability she is still really strong. Nowadays she is also a core element in credit farming on The Index.

Going with the Naramon polarity seems to always be the right call, because you either want to use Energy Siphon (on low level missions) or Corrosive Projection to increase your and your allies’ damage output.

Since you are either a DPS or damage buff Warframe, going for these auras will maximize the overall damage. 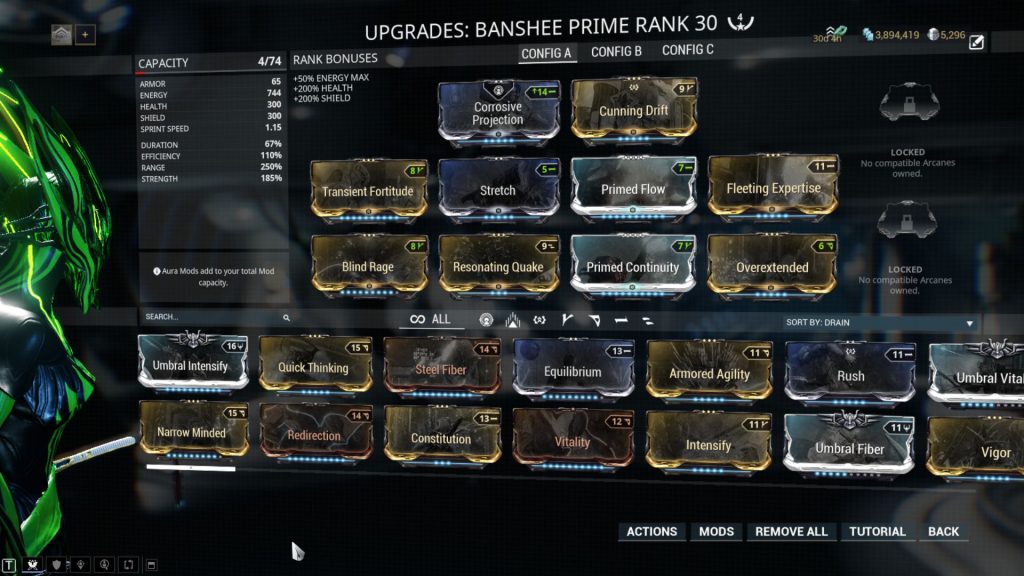 This is your area-of-effect damage build and will help you to quickly kill a vast amount of enemies. All you need to do is press 4 and watch everything and everyone in range die – then press 4 again.

Your Sound Quake ability is really strong and especially if you have a lot of energy (e.g. due to a Trinity in your group) you can do a lot of damage and crowd control at the same time. Because of that, Banshee is still often an essential part of XP farming groups on Berehynia, Sedna.

The main disadvantages with this build is the fact that you almost always will have energy problems (unless you get a Trinity in your group) and that you don’t use any survival mod like Redirection or Vitality since there is simply no space in your build for one of those.

You can try out Power Drift instead of Cunning Drift for a bit more damage, but that’s probably the best overall build you can find right now.

If you can find a premade group with a Trinity, feel free to switch out Fleeting Expertise for Intensify (or even Umbral Intensify), but without the extra energy income you really need the efficiency. 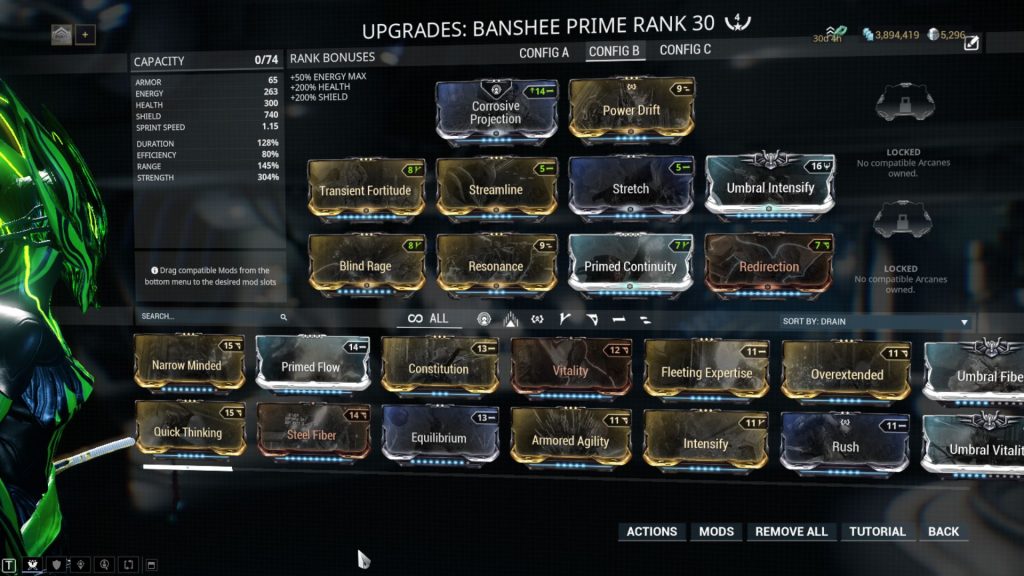 This is a really strong build and a lot of people don’t even know that their Banshee can do so much more than use her ultimate ability.

Sonar and especially Resonance are very good in almost every environment and are the main reason why Banshee nowadays is an auto-include in a lot of credit farm groups.

First of all the ability will highlight body parts on your enemies and if you or your allies hit those body party, the damage will be amplified by up to more than 1800%!

That is by far the biggest damage buff in the game. If you recast the ability (or use the augmented mod and kill an enemy) you can even highlight more than one body part, making it easier to hit the highlighted spots.

Another great advantage is the fact that the affected enemies are displayed on the mini map. That does make it super easy to find enemies (e.g. during The Index runs or Exterminate) and kill them as fast as possible.

If you run this build in solo missions or with random team mates make sure to equip a good weapon to be able to abuse your own damage buff.

If you don’t have Umbral Intensify or if you can’t max the mod yet, feel free to use Intensify or another survival mod. If you don’t experience energy problems at all, go head and switch out Stremaline for something like Primed Flow or Augur Reach.

Even Rush might be a nice addition to this build. 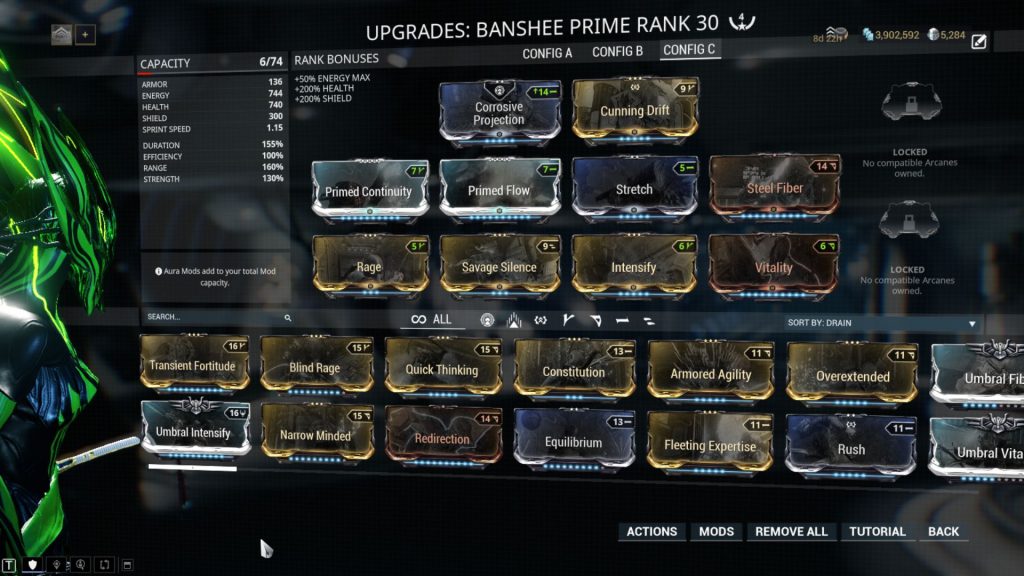 This build centers around the augmented mod Savage Silence and is more on the casual side of things. Since the mod boosts your finisher damage you should pack a good melee weapon for the best usage of this build.

If you want to maximize it even further you can even change your aura polarity and equip Steel Charge – but that is only recommended, if you gonna prioritize this build over the other possibilities. Otherwise Corrosive Projection is still fine.

Because of the melee build, combining Rage and Vitality is a good start to make sure to always have enough energy and you can even cast Sonar or your other abilities from time to time. Steel Fiber is used to make sure that you don’t die while you get into the faces of your enemies.

Intensify isn’t really needed since your Silence ability doesn’t profit from ability strength – but if you ever use your other skills you’ll be happy to have a little more damage.

You also don’t want too much range, because you don’t want enemies to be affected too early and snap out of the crowd control before you are there to kill them.

You might want to add Constitution (for Intensify) if you need more duration, but generally speaking this build should give you the tools you need to kill your enemies before the effect of Silence run out.

Banshee is a really fun-to-play Warframe with great builds. You can choose to go the damage route and kill everything (especially on low level missions) with just one button. Or you can pick the damage amplifier and help out your time by a lot.

She shines the most if you find a premade group with dedicated roles, but even with a random team she can do a great amount of killing.

Make sure to equip some Team Energy Restores if you find yourself having trouble with your energy pool. All there is left to do now is go out there and be the best Banshee you can be!