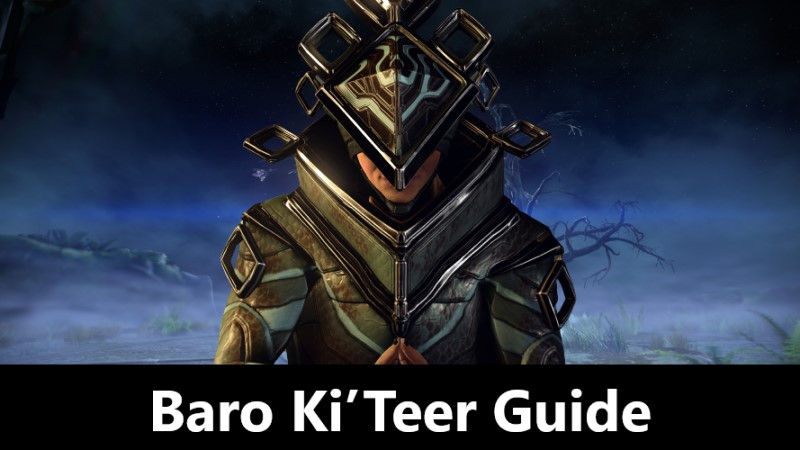 Baro Ki’Teer, who is also referred to as Void Trader, is known for his love of luxuries and the exotic, in particular those from the Orokin Void.

He sells rare artifacts and valuable items which aren’t available from anywhere else to the Tenno.

Baro Ki’Teer appears in the Concourse area of the Tenno Relays, but he isn’t there all the time. He makes an appearance every couple of weeks and can only trade for 48 hours before disappearing again.

You will see a countdown timer on the Void Trader Kiosks nearby, showing how long you have to wait before he comes back to trade.

If Baro is present on a relay, the countdown timer change to show how long is left before he goes away.

You will see an icon on the Star Chart located near the relay 24 hours before he shows up. This lets you know where he will be when he arrives and will slowly move along the relay path.

Once he arrives you can see a message from him in the inbox which tells you which relay and on which planet you can find him.

All relays have the chance of a Void Trader visit. You can access them by choosing a planet with a relay available in the Navigation Console.

After that, you can enter the relay node just like you’d enter a mission.

Some relays were destroyed by Balor Fororians in the Operation Eyes of Blight event. These differ according to the platform.

Destroyed relays appear as an unusable node in Navigation. Each relay can have up to 50 players at once. If full, another instance will appear so more players can join.

Near everything Baro Ki’Teer sells has to be paid for with Ducats. This currently can be acquired by swapping Prime parts at either of the Ducat Kiosks in the Relays.

You can exchange Prime Blueprints, Prime weapon pars and Prime Warframe components. The rarer ones are worth more Ducats.

The Void Trader has a different selection of stock from the Void each time he visits, which means his items are limited.

He always has a Baro Void-Signal and Sands of Inaros blueprint in the kiosk.

The Baro Void-Signal is exclusive to players who interact with Inaros Prime and you can only buy this once per visit. The Sand of Inaros blueprint requires Mastery Rank 5 to buy it.

Baro Ti’Keer’s whole inventory (apart from the Orokin Catalyst) is available to attendees of the annual TennoConn events.

This character seems to look down on Tenno who don’t have Prime gear, although he’s happy to help them out for a price. He was the one who offered the data to build Archwings.

It is suggested that he can access the Void and has gone there to find rare treasures. Some of the items are incredibly rare, suggesting he takes great risks to gather his treasures.

Baro Ki’Teer refers to himself as a Mystery Associate and contacts the Tenno anonymously to offer his help in combating the threat of Balor Fomorians.

He says he will provide the technology necessary to defeat them plus additional rewards for a great performance.

However, in exchange the Tenno have to harvest Cryotic which can only be found on some of the planets in the Solar System.

Baro Ki’Teer says he needs the Cryotic to preserve a delicacy known as the Martian Oasis Jellyfish, which would otherwise spoil during transport.

Darvo will reveal Baro Ki’Teer’s identity to the Tenno, saying he only wants to look mysterious to new customers.

He sampled the Jellyfish and his throat swelled up for several days. This means Darvo probably only revealed this to spite Baro.

Gate Crash reveals Baro gave a datamass to the Tenno which had information on it about the Archwing, an ancient piece of technology.

This is the centerpiece of the Tenno plans to beat Vay Hek’s Balor Fomorians. It isn’t specified whether or not Baro Ki’Teer was more involved in the operation or not.

Tenno assistance is required by Baro Ki’Teer to raid a Temple on Mars to find treasure. He calls the previous colonizers ‘Sky Worshippers’.

The Tenno collect a Sacred Urn from the Temple and Baro Ki’Teer wants them to obey the instructions on the urn to uncover more Temple secrets.

Eventually it is revealed Baro Ki’Teer is from Mars and was the sole survivor in his village of a Grineer attack.

He prayed to Inaros but the God King didn’t come, which explains Baro’s resentment towards Mars.