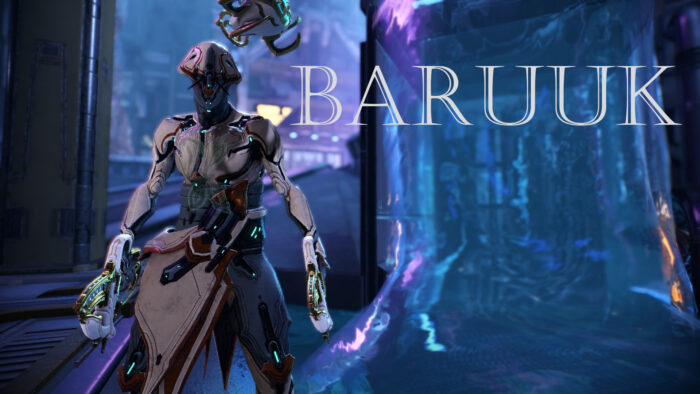 Baruuk is described as a pacifistic monk and someone who tries to evade conflict by all means.

That said, he still kicks ass and brings a good amount of damage and killing to a group. He is also fun to play, so getting your hands on his blueprints and crafting him will give you lots of hours filled with enjoyment.

Most players criticize the fact that his abilities aren’t really new and other Warframes can do what he does – but better.

That said, Baruuk is super fun to play, feels unique enough to justify the grind (or buying him with Platinum) and he can also fairly easy clear whole maps without any trouble.

Picking the ‘right’ aura mod really depends on your favorite build and simply what you are trying to accomplish.

Steel Charge is the obvious choice if you want to mainly build around your ultimate – and it’s one of your best choices here.

The other aura mod you might want to use is Corrosive Projection, since it is super versatile, works well with a team and also gives you the option to use Energy Siphon in your other builds (if you go for the Naramon polarity).

You should also think about the Umbral mods if you plan your builds: Umbral Intensify is obviously super strong and if you combine it with the Vitality or Steel Fiber version it will give you a significant boost.

That said, you don’t have to use any of the Umbral mods with Baruuk to get a very strong build.

If you do want to use them, you should have them maxed out and you will need to invest way more Forma in order to fit them in.

Tip: If you want to know more about Baruuk and his abilities, feel free to take a look at the wikia page.

Baruuk does come with his own Warframe weapons, called ‘Desert Wind’.

Once you activate your ultimate ability ‘Serene Storm’ he switches to them and deals huge amounts of damage. Building your Warframe weapon right is very important to increase the damage output even further.

So you want to use something close to our build presented here.

The build itself is not that special, you just improve the already strong aspects further.

Desert Wind has high impact damage, so Collision Force is very strong. Organ Shatter and True Steel are great with the already high critical chance while Fury and Berserker raise the attack speed by a lot.

Pressure Point (or it’s primed version) is always an auto-include in any melee build and two elemental damage mods should also be used.

Don’t forget to switch those with other elemental mods if needed.

A few short words about Sacrificial Steel and Sacrificial Pressure: If you have them maxed out and you have enough mod capacity to use them – use them!

They are great, but also expensive and most players don’t have them maxed.

This build fully revolves around Baruuk’s fourth ability ‘Serene Storm’ and uses his others ability simply to build up (or deplete the) Restraint meter.

To get the most of your Serene Storm, this build stacks a lot of ability strength, which not only increases the damage output, but also raises the damage reduction of the ability to the cap of 40%.

To decrease the Restraint meter you mostly use your second (‘Lull’) and third (‘Desolate Hands’) ability while running into large groups of enemies.

Enemy Sense is used for exactly that reason, because finding large groups, using your skills and then switching to Serene Storm is what you want to do.

Stretch and Augur Reach are included to increase the chance to hit enemies with your other skills while Streamline and Fleeting Expertise help with the somewhat low energy pool, since you can’t fit in and profitably use Primed Flow.

Don’t forget that your ‘Serene Storm’ doesn’t need energy to work, but only Restraint. And if you want to increase your damage output even further, you can switch out Augur Reach for Augur Secrets and even include Umbral Vitality over Redirection.

Since your health pool is already pretty low, Redirection gives you the better bonus over Vitality.

If you find yourself against enemies with a lot of status effects that directly affect your health pool (toxin damage, slash damage, etc.) you should use Vitality over Redirection simply to increase your chance of survival.

This version of a Baruuk build mainly uses the ability ‘Lull’ as a crowd control and also as a good pick to get your Serene Storm going.

‘Lull’ creates a field around you, forcing every enemy in it to fall asleep. This lets you not only control the battlefield, but also gives you the option to use finishers on them – or just ignore them.

That’s very nice if you are doing mission types that don’t need you to kill mobs.

A good example would be Excavation or Interception. Once your Restraint meter is low enough you can also simply use your fourth skill to clear the whole map.

For this build you want to get as much range as possible and combine it with a good amount of duration and some efficiency.

Again, Primed Flow doesn’t really have a slot here, so watch your energy regeneration. Energy Siphon is a nice addition!

Also, Intensify is mainly used to increase your damage output with ‘Serene Storm’ and if you don’t like that at all, feel free to switch it for something like Natural Talent or another survival mod.

And again: Use Vitality over Redirection if you think you’re going to meet a lot of enemies with status effect attacks.

Baruuk has a nice skill set and especially his ultimate ability is unique and fun to play.

His low health pool can become a problem against higher level enemies or enemies with status effect attacks, so plan accordingly by picking the right survival mods.

Also read through Baruuk’s abilities to understand the combinations for maximum effect and how to use Baruuk in general (hint: It might be very profitable if you keep your Restraint meter on zero or if you don’t run your ‘Desolate Hands’ into enemies!).

Other than that, keep experimenting with your builds, post your own ideas in the comments and have fun playing!