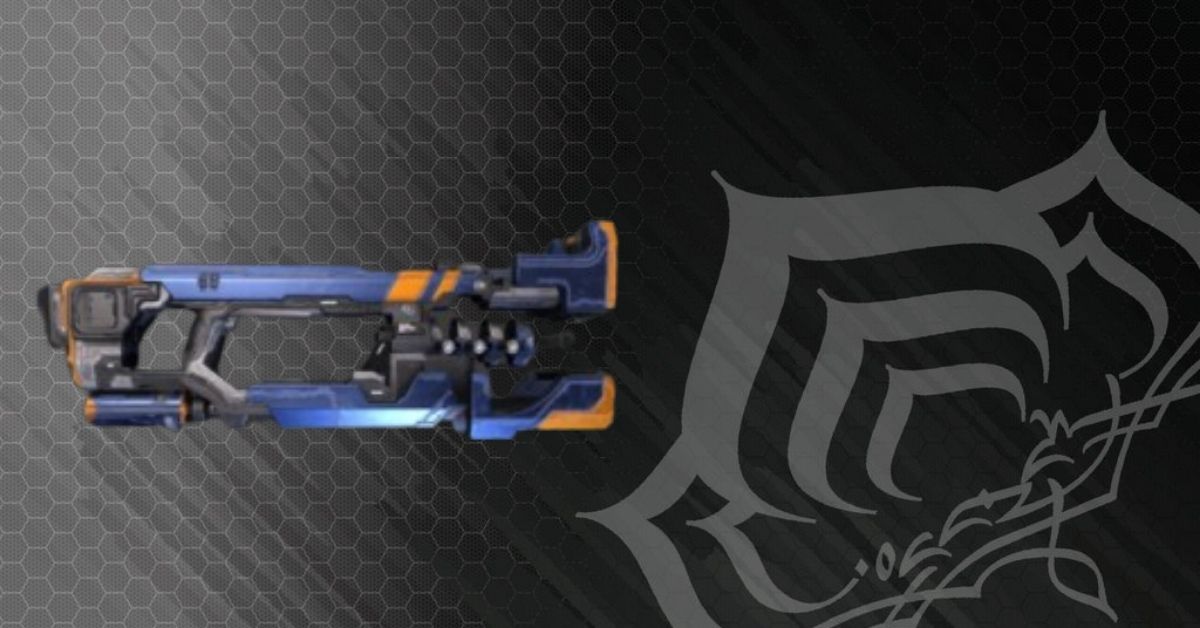 In the world of Warframe, the Corpus faction have several key tenets that defines them as a faction. These tenets are Cold efficiency, results, and Profit.

When looking at the signature Corpus shotgun called the Exergis it is no surprise that this weapon embodies everything the Corpus stands for.

What is the Exergis in Warframe?

The Exergis is a mastery 8 Corpus shotgun that shatters radioactive crystals and then launches them into enemies elegantly and efficiently cutting them down as they try to resist the Corpus.

It is a distinctive weapon because it is one of the only weapons in the game that has a base magazine size of 1 before reloading meaning that it has a unique gimmick of its fire rate and reload speed serving the same function.

If you decided to increase the reload speed because the magazine size is 1 you therefore increase the fire rate of the weapon, as it needs to reload again.

Alternatively, if you decided to increase the fire rate of the weapon then you would quickly have to reload and vice versa. It also has a key factor of infinite punch through when shot at enemies and then stops at 0.5 meters when it hits a wall.

This means that it does not matter how many enemies are clustered in a space, it will go through them and won’t stop till it hits a wall.

As stated, because the Exergis fires by shattering radioactive crystals into several pieces then launching them, its base damage is radiation on top of the standard damage type.

This weapon also comes with its high base status chance and lightning quick reload speed to make up for its miniscule magazine size of 1.

As a weapon the Exergis is a perfect representation of the Corpus, its radiation damage displays how a power that can be used for good is also inherently toxic and poisonous when misused.

Its infinite enemy punch through that lets it go through waves of enemies exemplifies how the Corpus will not let anyone or anything get in their way.

Lastly its gimmick with the reload speed and fire rate being practically the same represents how the Corpus won’t let any short comings get in their way and will adapt when the time comes.

To the Tenno, the Exergis is yet another effective killing weapon to add to their arsenal and one that they can rely on to get the job done. To the Corpus this weapon is a very effective answer, to a very annoying solution.

Where to Get the Exergis?

Like the acquisition of profits acquiring the Exergis is simple and straight forward in theory, but difficult and annoying in practice. With the mastery rank of 8 the Exergis presents itself as a sly and makes you think it is a relatively easy weapon to get, but like all good things it is never that simple.

To get the Exergis you will need to make your way to Venus to access the Fortuna open world. Now the most annoying thing to farm for this weapon is the repeller systems.

There are two ways to get this and both of them are not simple. The first is to reach the rank of old mate for the Solaris united faction on Fortuna which is their max rank.

This very fact presents an issue because there is a max standing per day of about 20k.

This means that for the first two ranks of neutral and Outworlder it will take 2 days, and for rank two called rapscallion – 3 days.

What makes this even more painful is that after you reach old mate you are then presented with Heist missions where the Repeller systems have a very low chance of dropping.

If for some reason you aren’t equipped enough for this fight, then it is purchasable from little duck at rank 3 of the hand which would take 6 days to reach and cost 5 thousand standing for one.

To summarize this weapon is a steep investment for any Tenno that wants to get access to the signature Corpus shotgun, but on the other hand attempting to get this shotgun does give you access to the other factors of the Solaris faction which isn’t so bad.

Although unlike most weapons, it also does an additional damage type on top of the primary damage types that will be applied first, and this damage type is radiation.

Due to the in-game lore of the weapon shattering radioactive crystals into small pieces it also comes with an innate multi shot of 3.

A unique characteristic of this weapon is that it has innate infinite punch through when going through enemy bodies, as long as there are bodies in front of the pellets, they will always pierce them until they hit a wall or another object then they will travel for 0.5 meters then stop.

Another interesting characteristic for the weapon is that as mentioned before is that the fire rate and reload speed of the weapon are proportional to each other.

This quirk is due to the fact that the Exergis comes with a magazine size of one, this is beneficial for the weapon as there are a plethora of mods that either change reload speed or fire rate, and this makes it easier to choose.

For a shotgun it has quite low accuracy for a shotgun, but it also comes with the least amount of pellet spread. This fact makes it on paper quite deceptive, but you can ultimately rest easy as the mod vicious spread doesn’t hamper its ability to hit targets as by the time you add the mod it would then have average accuracy because the standard spread is so tight.

Because of its infinite punch through and minimal spread you can afford to stay at quite a distance because the pellets would go through the enemies anyway.

Lastly, the most unique characteristic of this weapon is the fact that it has one of the highest status chances out of all the shotguns in Warframe and will most certainly benefit from a primary status chance build.

Advantages of Exergis in Warframe

The Corpus is like two things and two things only. Profits and results that deliver these profits, and in the case of the Exergis it exemplifies both of these things.

The first thing to note with the Exergis is its low magazine size of one, while this might normally be a disadvantage for the vast majority of weapons, in the case of the Exergis with the right Warframes this is a benefit.

Warframes like Volt, Harrow, and the toxin version of Chroma make the low magazine of the Exergis a non-issue just because they can increase the fire rate and reload speed of the weapon

And due to the fact, that reload speed and fire rate are directly proportional when taking the Exergis into account this makes the weapon incredibly dangerous in the hands of these Warframes.

The Exergis also comes with one of the lowest reload speed out of all the shotguns, and this combined with the fact that it also has one of the highest damages per shot it means that you can easily pump out adequate damage when using this weapon.

Due to the fact that the Exergis currently has the 3rd highest status out of all the shotguns it makes status builds a must for this weapon as it will consistently proc’s these effects and give the player a variety of choices when it comes to builds .

Lastly due to the fact that it has innate radiation damage, it means that you can get 3 devastating status types on this weapon that would normally not be able to be done on other weapons.

Disadvantages of Exergis in Warframe

When trying to acquire profits it won’t always be perfect, and for every positive of the Corpus they also come with their negatives.

Like the Corpus the Exergis is a shotgun that tries to be efficient and perfect, and too its credit gets excruciatingly close, but still has its negatives. Even though the Exergis has an innate infinite punch through, it still has damage fall off when firing.

This means that the pellets do 100% to 49.2% of their damage as long as the target is within 30 meters to 60 meters apart, but as soon as the target is farther than that the damage numbers start too not be worth it.

Even though the weapon has innate multi shot, but it is quite low when compared to all the shotguns that have multi shot.

The most disappoint part of the Exergis is the fact that it comes with a painfully low crit chance of 8% and to make a bad factor even worse it comes with one of the lowest critical multipliers out of all the shotguns with a disappointing 1.4.

Another issue is that that for a shotgun it is preferable to use multi shot with the weapon but for the Exergis it comes with below average multi shot when compared to other pellet shotguns.

Lastly despite the fact that its magazine of 1 can be made to be a benefit.

It is still a negative because it still does slow the flow of battle and makes the Exergis feel like a very close range sniper rifle rather than a shotgun some times.

Now let’s take a look at the best energins builds in 2021:

The very nature of the Exergis means that it is a lot more beneficial to fully commit to a full status build rather than a crit one, because of the weapons incredibly high status, if you use all the elemental status mods you will easily get 100 percent status, meaning that for each shot you will constantly proc heat, viral and radiation with an emphasis of heat and viral.

Although the position of the mods can be switched around allowing you to adapt depending on the faction that you are playing against.

The one downside of this build though is the fact that you are relying on your Warframes to increase your reload speed just because you don’t have modes for it.

With this build your status isn’t as high but instead you are going for raw viral damage with a higher reload speed.

Meaning that you are able to shoot more often, and then because viral is the highest damage on the weapon.

Currently it means that it is the one that is most likely to activate.

With this build you are prioritizing the Utility of the reload speed and fire rate of the Exergis, preferring to rather than go full damage.

Have a good balance between it and a quick reload and while fighting waves of enemies this is the smarter choice because it means that you are spending less time reloading and have a lower chance of getting one shot by enemies.

Now for this build you are fully committing to the innate radiation damage of the Exergis while using cold to slow the waves of enemies.

This build is quite the steep investment as it uses 8 forma, but you could always switch out the primed cleanse Grineer for another faction mod, or switch out the Primed chilling grasp for vicious spread.