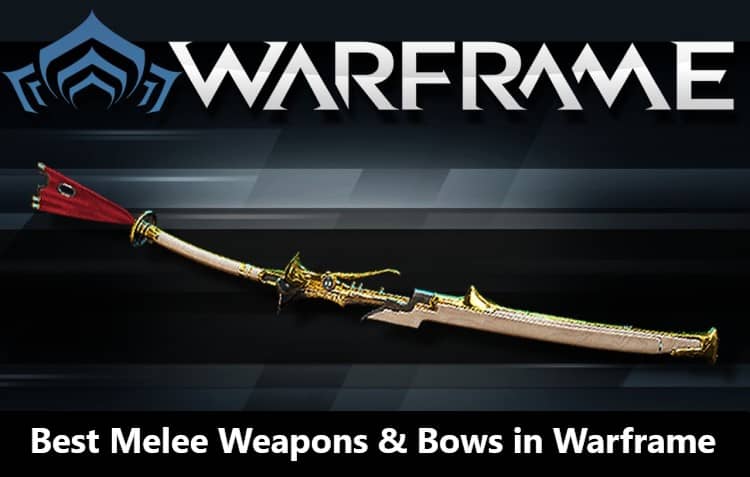 If you’re a relative newbie at playing Warframe, you might find the number of weapon options daunting. There are so many to choose from.

In this post you will find a list of the best melee weapons and bows to choose from in 2021.

Bear in mind there are both meta weapons and fun ones. Warframe should be fun to play so you might like to consider both kinds.

The best way to decide which to go for would be testing a weapon after modding it and seeing whether it fits in well with your style of playing.

Don’t use a catalyst on all the weapons you’re trying with though.

Disadvantage of this weapon is that it has no puncture and slash damage.

It takes the correct build to make this Warframe’s best Heavy Sword but add the Berserker and Blood Rush builds to make it an impressive killing machine.

Its not as fast as similar weapons, but still its a top-tier melee.

This high-status Polearm is end-game viable with a great range.

You have to buy the blueprint from the market to make it and you will also have to have a Tipedo which is fully crafted.

It deals a crazy amount of damage output including lots of Slash damage. Lesion comes with a passive bonus to increase attack speed.

Lesion gains 100% Toxin damage so if you mod for Corrosive damage you’ll find it easy to strip armor.

This Polearm works great with a Condition Overload build and 3 Dual Status mods, since this brings the status chance up to 100%.

A Sacrificial Steel mod can increase the critical chance to around 50%.

Lesion has a 37% status chance as well as great range. In addition it will gain a 15% increase in attack speed and 100% extra Toxin damage when attacks inflict status effects.

This is primarily a Slash weapon so it’s highly recommended you add Weeping Wounds.

Another good option is Condition Overload when pairing Lesion with Viral. This results in added damage from every Slash proc deal.

Claws aren’t renowned for their range so they aren’t a popular option. However, it gives the highest base damage out of all claw weapons.

If you want a claw weapon, this is by far the best choice. Lean into a critical build and get as much range as possible to make this a fearsome killing machine.

It’s great as a bleed build and can be modded for additional base damage, slash damage and status chance.

You must have Primed Reach if you want Venka Prime to work at full power. It can be built as a melee combo to reach a 13x instead of 12x cap.

Mods relying on combo like the Blood Rush cap out at 12x though.

Consider the 24% base status, 2.6x damage multiplier and 32% critical chance and you might want to add some Forma to this machine for an impressive result.

Another top-tier melee is called Kronen Prime. This weapon has impressively high base damage and slash damage.

Only disadvantage of this melee is low impact and puncture damage.

This weapon was introduced in Update 9.0 and it can inflict a lot of damage.

Polearms are great at clearing out groups of enemies and not just the ones right in front of you.

It also has a high range, shredding enemies in its sights. If you have maiming strike, this is a great melee option.

This polearm weapon requires MR 12 but it will wow you with its power.

Choose to lean into critical hits, status hits or a combo of both.

Body Count and Blood Rush can complement Orthos Prime, and stacking mods such as True Steel, Primed Pressure Point and Organ Shatter can cause plenty of critical damage.

This lets you build your combo quickly and get plenty of critical hits in when dealing with big groups of enemies.

Orthos Prime is a great choice because of its long range. You can build it for range and critical hits for the best result.

Find out more about Redeemer Prime.

This Heavy Blade came out with Chroma Prime access and it has a 32% status chance and base crit. Actually it’s one of Warframe’s best weapons.

It has a great critical chance and status allowing it to be built however you want.

Equip it with a good build and you can use it to easily take down any enemy you want. It is a Heavy Blade and features high Slash damage.

Try the Tempo Royale and Cleaving Whirlwind stance mods. Take it to the limit by modding for base damage, critical chance, range, and attack speed.

However it lost its combo and Blood Rush scaling it had previously.

This is an end-game viable, high crit melee weapon option. It combines an impressive amount of critical multiplayer, critical chance and slash damage.

Add the Blind Justice stance to make it a real monster. Add range mods to handle multiple enemies at once.

Equip it with the Berzerker mod for a high attack speed, Blood Rush so the critical hits continue, and whichever damage mod you prefer, along with a Condition Overload to top it.

Add Cyanex or Zakti for additional status damage on enemies before engaging with them.

This secondary weapon is recommended along with all Condition and Overload builds. Blind Justice adds upward sweeps and amazing mobility options to deal with whatever opponent you face.

Tranquil Cleave is simple to use and deals a lot of damage. Although the Dragon Nikana is also nice, without a powerful Riven the Nikana Prime is even better.

And here are the best Warframe bows:

This is Warframe’s quickest firing bow and it comes with the energy-restoring syndicate proc. You need to be MR 12 to get it.

If you aren’t affiliated with the Red Veil you can trade with Tennos to get it.

Using Rivens means you can make other bows viable for the end-game.

This deals blast damage with every shot and has a 50% base crit chance.

Compared to Warframe’s other bows, this one deals the most damage, although because of blast damage you might occasionally blow yourself up with it.

You can’t farm Dread because it only drops on stalker death.

It can deal plenty of slash-based damage and also has the best critical chance along with Lenz.

Paris Prime has very high  puncture damage which is really effective against armor.

It also has third highest critical chance of all bows, after  Dread and  Lenz.

Disadvantage of this bow is low impact and slash damage.

Simply the best Bow in Warframe right now. You can read more about Kuva Bramma here.

It might be tricky to use any of the good weapons because a lot of them require you to have higher mastery ranks.

The weapons above are all good options but it also depends on personal preference. Try them out yourself to see which you prefer. Still not sure?

Then try the following arrangement:

These beginner/end-game choices are more than solid choices.