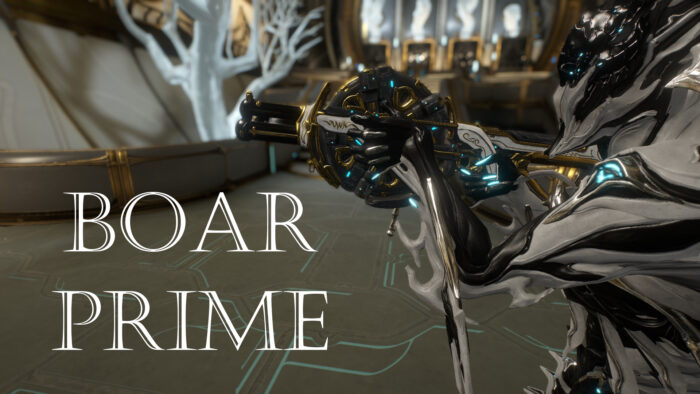 The Boar Prime is one of the oldest primed weapons in the game and features a very good status chance, which allows a 100% status chance and therefor is great against a wide range of units and even useful in different boss fights.

Combined with a fast fire rate, a big magazine size and a wide (but not too wide) spread the shotgun is a great pick for everyone that wants to quickly kill big groups or deal a lot of damage with just a few shots.

Even though the Boar Prime entered The Vault a long time ago the weapon gets unvaulted every now and then, so keep an eye open for that and get your hands on the weapon if and when you can.

Getting the best build possible isn’t super easy, because you will need a lot of rare mods to get where you want to be with your mod choices.

But it is totally worth it to try and find all the mods needed, because the Boar Prime will deal a huge amount of damage in a very short time.

Even though the Boar Prime does have a good critical chance as well as a very high status chance, there is sadly no great hybrid build to combine both of those stats.

The reason for this is that the status chance is estimated for each pallet shot (this is true for every pallet-based shotgun), so for example: If you have a 20% status chance and you shoot ten pallets, each pallet has a 2% chance to proc the status.

The Boar Prime is able to reach 100% status chance, so go ahead and build your weapon for that. Of course you are free to experiment and find another build you like.

We did found some versions you might to try out, so take a look at our ideas and maybe you’ll be able to improve them!

This is the build you will end up with if you’re trying to find the best overall choices from your mod collection.

You slap all four +60% status mods (Shell Shock, Toxic Barrage, Scattering Inferno and Frigid Blast) on the shotgun, use Primed Point Blank (or the normal version) as well as the two multishot mods (Hell’s Chamber and Vigilante Armaments) and combine that with Primed Charged Shell (or any other elemental mod) for some extra damage.

So as you can see, you don’t really have a lot of space to experiment around with the full status version. As always: You can rearrange your elemental damage as you want.

If you do want to add a little bit of punch through you can either switch out your elemental mod or Vigilante Armaments for Seeking Fury, which also adds some reload speed as a nice bonus.

Seeking Force isn’t a bad choice and if you don’t care about the small amount of extra reload speed should be your punch through mod of your choosing.

Another good mod you might want to try out is Vicious Spread: The extra damage increase is really great and the lower accuracy isn’t that much of a problem and the wider spread can even be a nice bonus if you fight against bigger groups of enemies.

If you really want to go for a hybrid build that tries to combine the really good status chance with the high critical chance, this is what you need to aim for.

It is basically the full status build, but instead of an extra multishot and elemental mod you do use Blunderbuss and Primed Ravage (or the normal version).

While your flat damage output is lower than in the full status build, you can nearly double your critical chance. So if you plan to fight against different types of enemies – for example during higher level fissure missions or on the Void tileset – you might rather have a little bit more critical chance and critical damage.

If you are going for this version then you don’t really have space to experiment.

This is probably the weakest of all the builds displayed here, but we don’t want you to think that there isn’t a pure critical damage build you can try out for your Boar Prime.

As explained above you don’t want to use any elemental damage on pallet-based shotguns unless you hit 100% status chance, so this build completely ignores the high amount of base status chance and goes the ‘as much critical chance as possible’ route.

To have at least some payoff you really want to bring Hunter Munitions and gain the extra slash procs every time you deal critical damage.

Vicious Spread is actually a really nice addition here and allows you to hit more enemies, which does have the chance to proc Hunter Munitions more often.

Critical Deceleration might be a little bit too harsh on the otherwise good fire rate, but the extra critical chance is actually needed to have as many critical procs as possible.

If you do want to counteract that you might want to use Shotgun Spazz over Vigilante Armaments.

The Boar Prime is really one of the best shotguns out there.

Not because it features a really great status chance, crit chance or an okay damage falloff, but simply because of the fast fire rate in combination with all the great stats.

So while the Tigris Prime might have a better damage-per-shot output and the Vaykor Hek might even be the overall better choice, but this shotgun is still fun to play, has a few different build options and is really great once you get your hand on all four +60% status chance mods.

So give it a try and find a built that suits your play style.

If you think you’ve found a better build or if you simply have an idea to share, feel free to leave us a comment and let the community know!