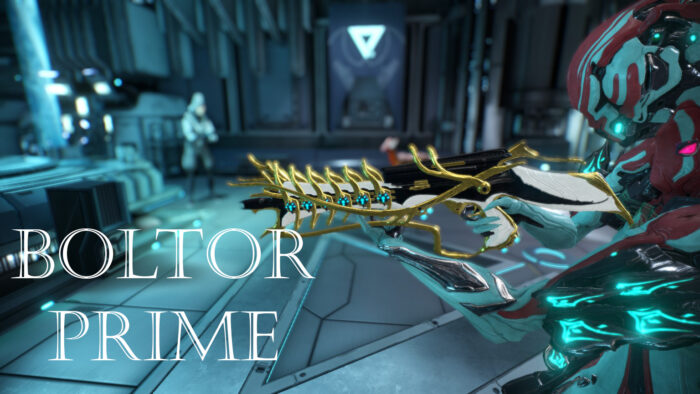 While you can get the normal version of the Boltor pretty early on, getting the Boltor Prime is a bit harder.

You do have to farm all the required relics first and then get lucky with the drops. But once you manage to get your hands on all the parts needed, you are able to build yourself one of the strongest rifles in the game.

The Boltor Prime features a high puncture damage combined with very good critical damage and chance, which will give you a super high damage output.

Since it also has a very high base damage, your overall damage feels pretty good.

That said, there are some minor inconveniences you should be aware about: If you compare the Boltor Prime to its direct competitor (the Soma Prime), you notice quite the difference in the magazine size.

And while you usually don’t need many bullets to kill one enemy, killing a whole mob group might take way more, especially if you ‘spray and pray’ (like most people do. Lets be honest, no one got time to aim!) you might find yourself in a lot of trouble.

So make sure do be as efficient as possible or at least know how to hide while you reload your weapon.

Picking the right mods for your Boltor Prime should be fairly easy if you have ever build any rifle in the game: You should (almost) always use Serration, Point Strike and Split Chamber.

Also you’re usually well equipped if you put in two elemental mods, with Infected Clip and Stormbringer being the standard choice.

But you should always try to pick the elemental mod combination that will give you the best advantage against the enemies you are going to face in your next mission.

You can use Primed Cryo Rounds instead if you have that mod maxed, because it will increase your damage quite a bit. But that isn’t a must-have in any shape or form.

To be honest, this build isn’t something special. It is upright, conservative and simply very strong. Two elemental mods, the usual mod support and Vigilante Armaments are good in almost every rifle build.

Just make sure to keep an eye on your ammo count and try not to spam too many bullets. You can even use Critical Delay over Heavy Caliber if you want to slow down your weapon (and if you feel like you don’t really need the extra base damage boost).

That way you will automatically reduce your ammo waste and therefor never ever have any problems with your ammunition reserves.

Other mods you might want to think about are Shred (fire rate an some punch through are always nice), Piercing Caliber to increase the already high puncture damage of your weapon and Bladed Rounds, which is super strong if your play style revolves around aiming and not hip-firing.

If you want to shoot 25 bullets per second, then this build is where you want to go! Adding Speed Trigger and Vile Acceleration to your build will give you the ability to empty your magazine in under three seconds – which is super strong if you want to simply slaughter mob groups.

While this build lacks elemental mods and isn’t the greatest against higher level enemies you will still feel very strong during low and mid level missions.

You could even add Shred and Vigilante Fervor and become even faster (but lose a good amount of damage output in the process). So feel free to experiment with this build and find the mod combination you do like the mos.

A few words of advice: You’re going to run out of bullets. Fast. So you really should use the Carrier (or it’s primed version) to increase your amount of ammo pickups. Otherwise you will have a lot of fun shooting your bullet – but only for a short amount of time.

Since the Boltor Prime already has a high critical chance, build around Hunter Munitions and increasing the critical chance even further seems like a good idea.

And if you’re using this build, you’re actually getting a good amount of damage out of it. Sadly, your slash damage is very low, so Hunter Munitions won’t be all that effective.

But you might also want to try Hunter Munitions and benefit from it against high level enemies or during boss fights.

While this build isn’t on the same level as the standard Boltor Prime build it still does have a good amount of potential and sometimes you just want to try out something different.

There is no doubt that the Boltor Prime is one of the best primary weapons in the game.

Some even say that it is the best rifle in Warframe, while others prefer the Soma Prime instead.

Nonetheless, it is a weapon that shouldn’t be missing in your arsenal and if you ever get your hand on the blueprint and all the parts you need to craft it, go ahead and do so! You won’t regret it.