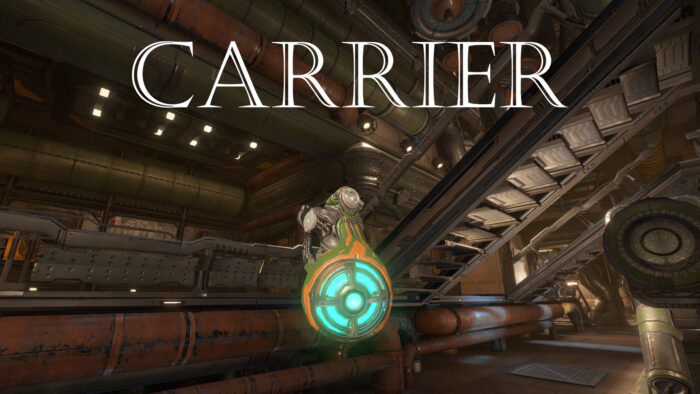 The carrier is one of the most used companions in the game and as a sentinel he does bring a lot of different benefits – starting with his unique weapon Sweeper and his three unique Carrier mods.

He is also one of the few sentinels that was released as a primed version, even though his parts are currently in the vault and can only be farmed during an unvaulting or by buying them from other players.

While he is usually seen as more of a supportive companion, he can also be useful with his extra damage output.

While Carrier does have his own attack mod, called ‘Striker’, nowadays all sentinels can simply use Assault Mode, which is strictly better, rendering the older attack mod obsolete and completely replacing it nowadays.

That said, often times you don’t even want or need to bring an attack mod on your sentinel, because you will need all your weapon mods twice (once for your primary weapon, second time for your sentinel weapon), so most Tennos don’t even bother using that.

This guide will give you all the important information you need to know about Carrier as well as some ideas on how to build this sentinel.

How To Get Carrier

Getting yourself a Carrier is pretty easy – well, at least obtaining the blueprint is.

All you have to do is open the market and buy the blueprint for 100.000 credits.

If you are low on that ingame currency, you might want to consider visiting The Index or doing a few Dark Sector missions to quickly gain credits.

Crafting the sentinel is also somewhat easy, especially if you already have a few planets unlocked.

Getting the Control Modules early in the game can be somewhat troublesome, but just keep working your way through the star chart.

You’ll be getting to the planets needed soon enough.

How to Get Carrier’s Unique Mods

As mentioned before, Carrier does have three mods that only this sentinel can use.

While you don’t want to use Striker anymore (it should be replaced by Attack Mode), getting the other two unique mods is very beneficial and advisable.

While it does drop from Corrupted Butcher and Corrupted Lancer, you will get your first copy simply by crafting the Carrier sentinel.

This mod is also oftentimes the main reason why people really like to bring a Carrier into their missions – you simply don’t have to bother about having ammunition problems every again.

You can buy this mod for as little as 75.000 standing points from Cephalon Simaris on any relay. While it doesn’t add to your damage or survivability, it is a very nice utility mod and will help you get more resources, credits, mods, Endo and much more.

Simply because it will break everything you would miss otherwise.

You usually have to decide if you want to use your sentinel companion as a damaging support or if you simply want to bring it as a utility bubble that follows you around.

The first one has the advantages that you get a little bit more damage output and you oftentimes can bring elemental damage to reduce armor, health or whatever else.

Second idea is often times better, because you don’t need to fully mod your sentinel weapon and you get more supportive mods to help you in your adventures.

In the end it is up to you and your personal preferences. We will suggest two different builds here, but you can always change them as needed.

Just make sure to understand the value of the different mods and use them accordingly.

There are a few easy choices, so let’s start with these: Ammo Case and Looter are the unique Carrier mods and are super strong, so you really want to bring them.

Vacuum is also an auto-include in every sentinel build, as well as Primed Animal Instinct (or the normal version). Finding enemies faster, never missing Endo or mod drops and seeing objects like Somachords, Frame Fighter Fragments or Cephalon Fragments on your mini map is super useful and will help you more than you might think.

Enhanced Vitality and Repair Kit are Carrier’s survivability, while Primed Regen (or the normal version) will help if the survival kit fail.

Usually you might also think about Calculated Redirection, but since this sentinel does have a low amount of shield, you don’t gain much by using the shield boost mod.

Assault Mode is here to make sure your sentinel as actually attacking and Synth Deconstruct as well as Guardian are here to support your Warframe.

The weakest mod here is probably the health orb drop mod and you might rather bring Sacrifice, especially since this works well with your Regen mod.

Mods that might look great, but aren’t: Coolant Leak isn’t necessary at all and you rather have cold damage on your sentinel weapon that this bad freezing aura. Sanctuary might also look great, but nowadays you can just switch into operator mode, go invisible and then revive your allies without taking any damage at all.

This version looks pretty similar to the damage build, but has a big difference: It isn’t using any attack mod, so your sentinel weapon won’t fire at all.

Instead you get to use Sacrifice, which works great with your Primed Regen.

Sadly, you won’t get a drop from Spare Parts if the Carrier is using one of the Regen charges, but will drop a rare resource if it dies completely (or if it gets destroyed because your Warframe died).

The resource you’ll get here is from the planet’s table you’re currently on, so keep that in mind. Also sometimes you just get common or uncommon resources, which is just some bad RNG.

Another important information: The resource drop is influenced by Resource Boosters and will also drop for all your allies!

Carrier and its primed part are very popular companions, mainly because of the unique mods this sentinel has.

In the end you can always pick whatever weapon and build you like, because outside of the ‘must have’ mods on your companions you don’t really feel the impact all that much.

You might want to try out the signature weapon Sweeper (an okay shotgun for lower level content) or instead pick the more commonly used Vulklok, which is just a good sentinel weapon overall.

If you think you have a better build or if we missed some important information, feel free to leave us a comment!