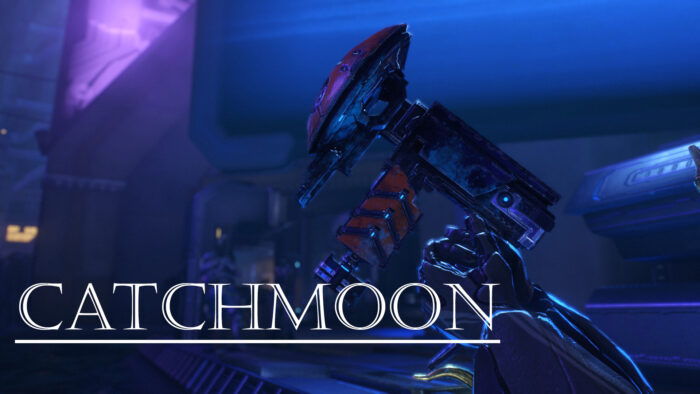 The Catchmoon is widely seen as the best Kitgun chamber, even though the other three versions are fine picks as well.

It features innate Heat and Impact damage as well as Punch Through, which makes it a great weapon against large groups as well as against higher level enemies and even boss or assassination targets.

It also has a fairly large caliber and shoots big energy-like beams, which do have a (fast) travel time as well as damage fall-off (starting at 20 meters), no bonus damage on headshots and also a somewhat limited range of only 47,5 meters.

However, if you don’t mind getting close-ish, killing your enemies will be very easy with a good Catchmoon mod build. We will not only provide you that build, but also talk about what components you should use if you are building your own Kitgun.

Let’s start talking about what components you should use, which is actually not very controversial for this Kitgun: You obviously want to pick the Catchmoon as a chamber with an Haymaker as your grip to increase the damage output as much as possible and use the Splat as your Loader.

The latter will increase your critical damage by a lot, which is just great with the big caliber shots and you already increased damage from the Haymaker.

That will also allow you to use Primed Pistol Gambit and Primed Target Cracker, which are both just super strong in general and especially on a crit-based weapon.

You could try and experiment with different components and if you’re able to find a better version, leave us a comment!

This is probably the build you’re going to end up with as your standard pick. Hornet Strike and both primed mods (or the normal version if you don’t own the primed mods right now) are an auto-include in any crit-based secondary.

Magnum Force should also always be used unless the accuracy reduction is too big of a problem – which it isn’t with the Catchmoon. You also want to get as much multishot as possible, which will allow you to actually obliterate bigger mob groups with just a shot or two, so bring Barrel Diffusion and Lethal Torrent.

For the last two mod slots we highly recommend using two +60% status chance mods of your choice and liking.

Your weakest mod here is actually Lethal Torrent: While the added multishot is great, the extra fire rate isn’t really useful since you’re most likely going to one-shot enemies for a long time.

So if you find yourself having a good Riven mod or the need for something like Pummel or Augur Pact, switch them in for Lethal Torrent.

Even though the Catchmoon is one of the strongest secondary weapons in the game, there isn’t a lot of experimenting to do – neither for the component part nor for the modding.

The weapon is fairly straight forward and as long as you are in range you will quickly delete everything around you. Even though there is no extra headshot damage we do recommend using the Pax Seeker Arcane, simply because the effect is very strong.

If you think we missed something important or if you have your own ideas to share, don’t hesitate and leave us a comment!