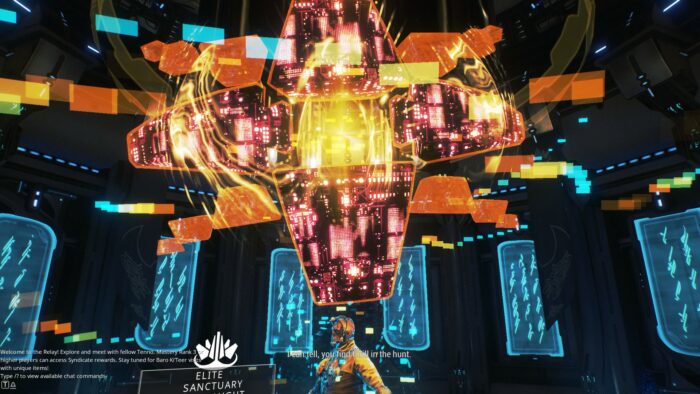 If you play through Warframe you will eventually find your way to a relay and meet Cephalon Simaris. Or you keep on grinding through the current Nightwave Season and will read his name in a weekly quest.

Or you read about the Sanctuary, some special weapons and mods. There are a lot of different ways newer players hear about Cephalon Simaris first. But the questions are always the same: ‘Who is this guy and how can I increase my standing with him?’

The answer to the ‘Who?’ part is pretty easy: Cephalon Simaris is a Cephalon construct found on every relay and therefor an A.I. – like Ordis or the syndicate leader Cephalon Suda.

It basically is a neutral syndicate and as with every syndicate in the game you can gain a certain amount of daily standing. This standing can be used to buy a lot of different stuff. The ‘How?’ is a little bit more complicated.

So keep on reading this guide if you are looking for an efficient way on how to farm the standing – or if you simply want to understand the basics behind Cephalon Simaris.

First of all you need to understand that there is a daily limit on how much standing you can gather for the Cephalon Simaris syndicate.

To gather those standing points you need to perform Synthesis, which is very different from the way the first syndicates you encounter work: Instead of just equipping a Sigil, you do need to buy Synthesis Scanners from the A.I. – they cost 5.000 Credits for 25x scanners and will allow you to get the standing points.

The mechanics are very easy to understand: Equip the Synthesis Scanner in your gear wheel, head into a mission and use them on enemies.

Every enemy scanned will yield a certain amount of standing points and you can basically do this until you scanned every enemy in your mission or until you reached the daily standing cap.

Especially if you have a lower Mastery Rank you can probably reach the daily standing in just one mission run.

There is also the daily Synthesis task, which can be started after you’ve finished the quest lines ‘The New Strange’ and ‘Stolen Dreams’.

Every day Cephalon Simaris will assign a Synthesis target to you, which you need to scan between two and four times times. There is a great Steam guide which will tell you exactly where you can find the different targets.

Keep in mind: While scanning the target will give you a lot of standing, this standing is also subtracted from the daily standing you can gather. But the extra standing points you get from finishing the daily Synthesis quest (by talking to Cephalon Simaris after you’ve scanned the target as often as needed) are not.

That means that even if you hit your daily standing cap, you still get the points.

So what you want to do is scan the targets, then finish the daily standing farming and at the end of that turn in the quest.

Quick Way To Get Standing

Theoretically you can reach the daily standing cap simply by going into the mission with the Synthesis target and scan everything.

So for example, if you can find the target in an Exterminate or Capture mission, scan every mob (and don’t forget the Synthesis target) and just finish the mission.

On lower Mastery Ranks this should be enough standing points to reach the cap.

Once you’ve reached a higher Mastery Rank it becomes harder (or rather ‘it takes more time’) to reach the daily standing cap – unless you bring an invisibility Warframe into the mission.

As long as you are invisible (and therefor undetected) you will get three times the amount of standing for a scan. We recommend using Ivara, pop a energy restore at the start of the mission and then stay invisible while scanning everything you can.

The best mission type for that is Sabotage, because in Exterminate you do have to kill enemies, which can alert other enemies in range and in Capture missions enemies will also be alerted once you’ve attacked the capture target.

Hunt for the Synthesis target with your Synthesis Scanners.

Scan the weak points of the Synthesis target to ‘capture’ it.

If you are looking for a great way to test your weapons, Warframe abilities and ideas against enemies without the need to jump right into a mission, the Simulacrum is the way to go. It is basically an artificial room to test out everything.

You can spawn up to 20 non-boss enemies (as long as you have completed the Codex research on them) and even scale their level based on your current Mastery Rank (30 + 5x MR).

Depending on your setting the enemies with either attack you right away or just stand around and ignore you completely. This is very beneficial if you just want to see how your current weapon build will do against level 120+ enemies.

Then you can simply use the console (left side of the entrance) and teleport into it.

Don’t forget that you can’t gain standing or Affinity in the Simulacrum and you also won’t get resource or mod drops.

Another great benefit of visiting Cephalon Simaris are the practice runs you can do for Master Rank tests.

On the right side of the entrance you can find all the trials for all the Master Rank tests you already have done (so you can simply repeat them) as well as the next upcoming test.

This will not influence your progress and you can basically train for the next test without getting a penalty.

You also need to equip a weapon in each of your three weapon slots, otherwise you can’t try out the tests.

However, if players can’t currently reach the highest possible Mastery Rank, Digital Extremes won’t include the next test in the system, even though you can active the console for it.

So for example: If people can’t get higher than MR 27, they will be able to active the trial for MR 28 – but then will be redirected to the MR 27 test.

Let’s quickly talk about the offerings Cephalon Simaris is currently showing: The Simulacrum Access Key is one of the best rewards to invest in early on.

There are also unique mods for your sentinels, Archwing or Warframe and depending on your build ideas you might want to buy some of these (or eventually all of them).

If you are out of Platinum and you really need to get an Exilus Adapter, you can buy the blueprint from here for 50.000 standing points, but if you do have enough Platinum, buying these is usually best.

Simulor and Heliocor are okay-ish weapons and if you have standing points to spare, buying the Loduplex and all the games for it will give you a few (or more than a few) hours to play games in Warframe.

You can also re-buy most of the blueprints you get from quests – so if you sell your Chroma or Limbo by accident you can buy the blueprints from here.

Personally we do recommend investing in the four Widgets to make your life easier for future Synthesis scans.

Cephalon Simaris brings a lot of great additions to the game:

And there are a lot of great offerings you can trade for your Cephalon Simaris standing.

Yes, farming the standing can be annoying and time consuming, but you don’t have to get everything as fast as possible.

Just get the few things you really need or want to have and ignore the rest until a later date. Don’t forget that there is a lot of other stuff to do in the game, so switching it up is always a good way to keep you from getting bored, annoyed or frustrated.

If you want to add some information to this guide or if you simply have questions or an idea to share, go ahead and leave us a comment!