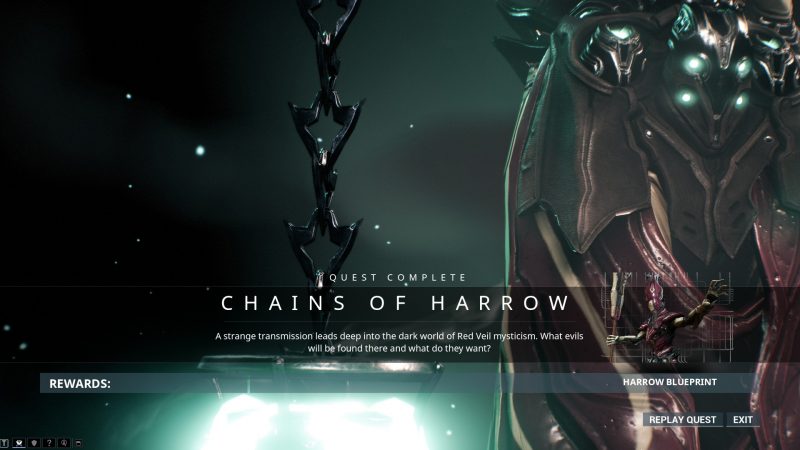 You can obtain Harrow’s main blueprints in this quest. Do note that the Chains of Harrow quest can only be played solo, but before you can start, you must complete the “The War Within” cinematic quest and “Mot Survival Mode” on the Void via Sedna.

The quest will automatically be available from your quests section via Codex once completed. Once you’ve managed to play through the quest, you can finally build Harrow.

As you start the quest, Ordis will receive a transmission from their Syndicate channel. The message contains a female voice talking to someone named Rell.

Once the message ends, your vision darkens and then returns to normal. Ordis then assumed that this message is haunted.

He then tracks the signal to the Earth’s orbit where an abandoned Steel Meridian ship is found.

All Chains of Harrow Quests

Here is the list of missions to complete the quest.

As you arrive, the Lotus will tell you to search around the abandoned ship. It will be already marked on the map, so you just only need to follow it.

The mark will lead you to three things that you need to find which is easy enough. After that, a transmission from a person named Palladino will contact you asking for your protection and her location will be marked on the minimap.

As you go towards her location, you will be facing hostile Red Veil Fanatics armed with different weapons, like Rakta Cernos, Rakta Daggers, and the Tetra.

When you arrive at her location, you will find Palladino with her Kavat called Rook, do not leave her side as a horde of enemies will appear and attack.

You must protect her for 30 seconds and until the timer runs out before you can proceed with the extraction. Palladino will then ask you to meet her on Iron wake.

The Iron Wake is a Steel Meridian outpost located on Earth. Go towards the room where Palladino is and use Transference (default 5) to enter her quarters with the cutscene.

She introduces herself as the Red Veil’s spiritual medium and tells about the Red Veil and Rell. Unable to communicate with Rell, she then tells you to retrieve Rell’s stolen relic to calm his spirit down as he is driving many of their members mad.

After the cutscene, Lotus appears expressing her doubts on Palladino’s motive but tells you to play along for now.

You will arrive in an abandoned Corpus ship, which looks the same as the previous one.

Once you find a message written in a wall, a conversation between Palladino and Lotus will trigger, revealing who Rell was and how the Veil came to be.

You will then hear a mysterious voice echo through the ship after that, Palladino will ask you to follow the voice.

Arriving at the source of the voice, you will find yourself in a room filled with dead Red Veil’s corpses. Look around the room and you will find a golden horseshoe-shaped object that is Rell’s relic called the Donda.

Retrieving the relic will trigger a horde of hostile shadows, a manifestation of Rell that will reanimate the dead bodies as zombies in the room.

You won’t be able to kill the shadows of Rell with anything, so Palladino will tell you to run back to the ship instead and escape.

As you arrive again in the Iron Wake, go back to the room where Palladino is and trigger the cutscene to return the Rell’s relic.

She will use the relic to communicate with Rell, triggering Rell’s past with a short minigame. A card game showing a face with an emotion, you must choose the right emotions for the shown cards.

After completing the minigame and cutscene, the Lotus will appear and asks you to go back to the ship as she may have a theory regarding Rell’s nature.

On the ship, the Lotus then explains her theory about Rell’s manifestations and asks if they can capture it.

Ordis will then tell you that you can use Kinetic Siphon Traps sold by Cephalon Simaris. Equip it to your hotkey to be able to use it quickly.

Before you start this mission, make sure you have a lot of kinetic Siphon Traps as you will be capturing Rell’s manifestations in 3 tasks.

Lotus and Palladino will be having a conversation about Rell’s warning, while at it, you will come across a message on the floor.

A manifestation of Rell’s emotion will appear, use the Kinetic Siphon Trap to restrain it, which you can now damage and kill it immediately.

These manifestations can’t be killed, so do be careful as they also have powerful attacks that will damage or kill you.

So best to evade and run until you find, trap, and kill the other two remaining emotions for this mission and then extract.

Here are the abilities of Rell’s manifestations that you should be careful with:

Palladino and the Lotus will have another conversation and Palladino will warn you that the manifestations are getting stronger.

Then you will come across another message on the floor. Like the previous mission, use Kinetic Siphon Traps to trap and kill all three Rell’s emotions, and then extract.

Do be careful that you will be facing more Red Veil Fanatics and zombies on this mission.

This will be the last capturing mission. Like from the previous two, Palladino and the Lotus will have another conversation, and you will come across another message.

Find, trap, and kill all three Rell’s emotions. After that, Palladino will then tell you that Rell’s spirit has returned to his Warframe and asks you to go to the temple to free him.

Palladino will tell you to destroy the Warframe to bring peace to Rell. As you arrive, you will see red ember trees, find a hole at the base as that will lead deep within below to the central temple room.

As you are halfway towards the temple, Palladino will ask you to only enter via your operator form which you have no choice but to do so via transference.

Once you have reached the altar, you will see a Warframe chained and hung in the center. You need to destroy the chains that are lit in blue with your void beam.

Once the first chain is destroyed, Red Veil Fanatics will appear, and fireballs will start attacking you. Dodge through it and fight while kiting the enemies around the area.

You will not fail and lose any progress if you die here.

As you destroy all the chains, Rell will appear and will have a conversation with you and Palladino.

Palladino then assured Rell that he could finally rest in peace, completing the Chains of Harrow Quest, with this, you obtain Harrow’s primary Blueprint and permanent access to Iron Wake on Earth.

Best Warframes For Chains of Harrow

Chains of Harrow’s mission lets you divulge in a haunting experience and a reveal of Harrow’s past, letting you acquire the main blueprint upon completion.

Most of the time, you will be running and killing specific enemies like Red Veil Fanatics as Rell’s manifestation can’t be killed.

Having a fast, mobile, or someone that can take a lot of damage will be good for this mission, as they can really take you out if you are unprepared.

You can also use a Specter with an AoE weapon like Arca Plasmor, Fulmin or Zarr and deploy them fighting against the Red Veil Fanatics.