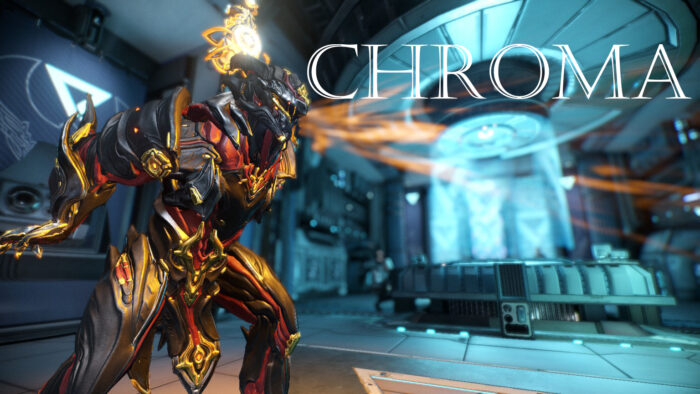 The career of Chroma is somewhat unique in Warframe: Since his release in March 2015 Chroma was used as a main tank in different survival setups and even was super important for credit farm while the Secura Lecta was still overpowered.

Of course this was before the rework of The Index and nowadays Chroma is mostly used for Eidolon Hunt, but other than that he lost his place in the current meta.

But he is still a really fun-to-play Warframe and his really unique skill set and ability distribution makes him fun to experiment with.

So go ahead and try some of his builds and have fun while doing so!

Since his release Chroma has been used for a lot of different things. That’s the main reason why a lot of seasoned players have put a lot of Forma into this Warframe – the main use and main build changed so many times that it’s hard to find the perfect build.

Naramon gives you access to Energy Siphon, Corrosive Projection and Sprint Boost, which are also viable (depending on your favorite build).

But there is also a point to be made in picking a Vazarin polarity and going with Rejuvenation if you are playing a very tanky build.

So as you can see, there are a lot of different and viable options and they all usually depend on your play style and how you plan on using Chroma.

Tip: If you want to know more about Chroma and his abilities, feel free to take a look at the wikia page!

Chroma is predetermined to be played as a tank in some form or another. Especially if you pick the white energy color for Cold skills, you’ll get higher armor and an Ice Shield with your second ability Elemental Ward, which will increase your survivability by a lot.

Combine that with your third ability Vex Armor (which will raise your armor even further) and you are able to face tank almost everything.

You do need a high amount of ability strength to profit as much as possible from those two skills and combine that with a long duration (so you don’t have to recast every few seconds).

This build uses Vitality and Hunter Adrenaline as a combo, but you can switch those out for Steel Fiber and Armored Agility if you want to be even more tanky from the get-go.

Primed Flow (or it’s normal version) also helps out a lot since your energy pool is mediocre at best and you really need to be able to keep your abilities up.

Aura slot polarity is a somewhat tricky question, since you can profit from almost every aura mentioned above.

Going for Corrosive Projection is the more team friendly solution, but you’re fine with almost every other main aura mod. If you want to invest even more Forma, you can also try to fit in Umbral Intensify and Umbral Vitality, but that’s just for super min-maxing.

This is a somewhat oldchool build and uses your ultimate skill Effigy and its ability to increase all picked up credits by 100% (on max level).

Enemies killed by your effigy also have a 60% increased chance to drop additional credits, while the range for doubled credits picked up by your Warframe is only ten meters.

So you should try to kill enemies as close as possible to your Effigy. Back in the days you could get a lot of credits by combining your ultimate ability with a Secura Lecta, which would give you 11,6x bonus credits.

Nowadays this is capped at 4x bonus credits, which is still a lot of you combine it with your Effigy and a Credit Booster. So if you want to use this build it is highly recommended to use that syndicate weapon and reach Mastery Rank 18 to get the maximum cap.

The build itself is pretty straight forward, since you simply stack a good amount of duration, efficiency and ability strength in order to get some kills with your Effigy.

Again, Corrosive Projection is used because of its benefit for the whole party (and because you can’t get any bonus from Energy Siphon while channeling your ability) and Vitality is a good choice for a survival mod, but can be replaced by Redirection or Steel Fiber.

For the energy color you should always change it dependent on the enemies you are going to face, with red for heat and green for toxic damage being the best choices generally speaking.

Eidolon hunting is very popular, mostly because it will help you to gather all the current Arcanes and therefor strengthen all your Warframes.

The idea here is to become somewhat tanky in order to survive the Eidolon damage and also have a good amount of duration and ability strength to keep your second and third ability up.

It is somewhat similar to the tank build, but if you have the chance to use a good sniper rifle and Dead Eye as your aura mod, go ahead and do that! It will help you kill those Eidolons faster, since Corrosive Projection doesn’t affect those big creatures.

You probably have to kill some other mobs as well, so going for the armor reduction is okay, but not the best in those circumstances.

Other than that there isn’t much to explain here. If you feel like you’re having troubles with your energy pool, go ahead and switch Sreamline or Vitality for Primed Flow (or it’s normal version).

You can also use Rush instead of Power Drift, but that is more of a personal decision and a quality of life choice.

While you can most certainly use something very close to our Eidolon build for the Profit-Taker Orb fight, adapting your build will be very beneficial.

Especially if you put in Adaptation you’re going to reduce the incoming damage by a lot. Other than that this build should be easy to understand: You’re stacking as much ability strength as you can get and combine it with some duration.

That way you can keep up your second and third ability for a long time and get the most benefits out of it.

Mods you might want to think about are Handspring over Power Drift, Umbral Vitality over the normal version (if you can fit it in somehow) and also a replacement for Hunter Adrenaline.

You’re not going to take that much damage (and if you do, you’re going to die), but having some extra energy intake is always nice.

If you want to switch it out you should consider Primed Continuity, Constitution or even Augur Secrets to raise your strength even further.

For picking the energy color, you either want red (for extra health and regeneration) or white (for a lot of extra armor and damage mitigation).

Use whatever you like most and try some different routes until you find what you are looking for. Taking down the Profit-Taker Orb shouldn’t be a problem!

Chroma is a great and absolute unique Warframe. The idea that changing energy colors also changes the skills is very interesting.

Sadly aside from doing Eidolon Hunts with a premade group you’re not going to find a lot of Chromas in the current meta. But feel free to try out the different builds and experiment with your own ideas.

Also give all the different augmented mods a chance, even though they aren’t that strong. But as long as you have fun with your build you will enjoy your Chroma!