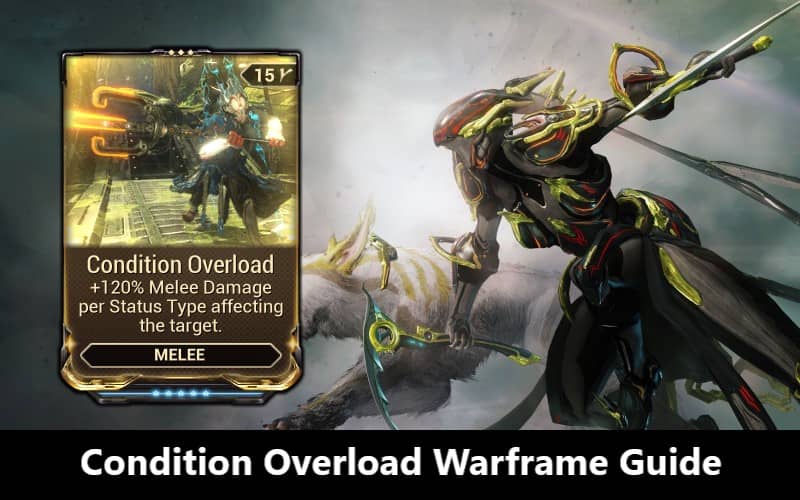 If you are looking for tips on how to use Condition Overload mod in Warframe, you came to the right place! This melee mod gives extra damage that is based on how many unique status effects are currently on the target.

The bonus damage the mod gives you stacks up with other damage mods like Spoiled Strike and Pressure Point to increase melee damage.

Your rank affects the effect and cost as follows:

N is how many unique status effects that currently affect the enemy.

When 2 status effects are applied to one target, the mod offers more base damage than both Pressure Point and Primed Pressure Point.

With builds that don’t have much mod room you might want to get rid of Pressure Point and get Condition Overload instead. This is especially true for status oriented melees.

The bonus damage from a new status effect won’t be applied to the hit that inflicted it. Only subsequent strikes will be amplified.

Gunblades’ pellets will hit consecutively, meaning you can’t amplify them with other pellets of the same shot.

Status procs can come from any source including both secondary and primary weapons, as well as Warframe abilities, other players, companions, and the environment.

The following all count for this mod:

Nukor and Kuva Nukor have a special invisible status known as Microwave to any enemy touched by its beam. These procs have an infinite duration.

Knockdown still counts as a status although it won’t cause any icon on the enemy. Abilities or conditions which prevent knockdowns stop it from increasing damage.

Knockdown and Lifted cancel one another out, so the most status effects applied to an enemy will be 16.

Status effects from Gas and Electricity give radial damage around the main target. This makes them good when facing crowds.

This radial damage benefits from the primary target’s damage bonus. However it won’t count toward bonus damage on hits afterwards on secondary targets.