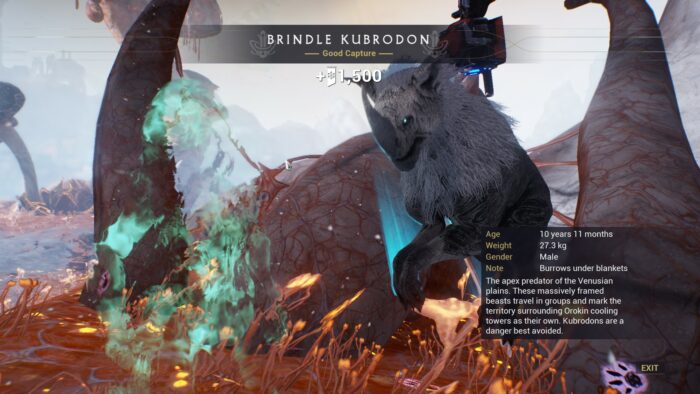 With the Grineer and Corpus units running around on the Plains of Eidolon (Earth) as well as on the Orb Vallis (Venus), the local fauna struggles to survive.

This is where you as a Tenno come in: Your job while doing conservation runs is to find, lure and capture the different animals that are currently living on Fortuna or rather on the Orb Vallis.

To do that you not only need to get out there and search for the right tracks, but use the right lure and tactics.

This guide will tell you exactly how to successfully hunt and capture all the different animals on Venus and Earth.

Even though Conservation is a non-combat activity you should also be prepared to fight and kill random enemy units that might just spawn during your hunting session.

We recommend either using a good weapon or bring an Ember – that way you can just toggle on and off your ‘World on Fire’ ability.

There are however even better Warframe choices. Keep on reading if you want to learn more about that!

Before you can head out in the open world (we recommend doing a free roam run in solo mode unless you’re playing with a premade team), you need to get some equipment.

To start of you need to buy at least a Tranq Rifle from The Business on Fortuna (Venus) or from Master Teasonai (Earth) once you’ve gathered a high enough rank and enough standing with the respective syndicates (Ostron on Cetus, Solaris United on Fortuna).

You also need to buy at least one Echo-Lure for the planet you’re going to hunt on – but if you do have a high enough rank and enough standing it is highly recommended to buy all the lures.

After you managed to get your hands on the Tranq Rifle you’ll need to equip it into your gear wheel before you head out into the open world parts of the planet.

You don’t have to equip the Echo-Lure, because it will show up once you use the Tranq Rifle during the mission, so don’t worry about that for now.

It is also important to note that you don’t necessarily need an Echo-Lure if you’re hunting on the Plains of Eidolon, but you can’t successfully hunt on Fortuna without at least owning one.

How To Hunt Animals (Perfect Capture)

The actual hunting and capturing is divided into four steps, but before you can start tracking down the different animals, you do need to equip the Tranq Rifle and thereby open up the Conservation menu.

It will look fairly similar to what you already know from the fishing menu, with three slots appearing on the bottom right of your screen. You can ignore the first slot for now, because it only shows you the Tranq Rifle.

The second slot however holds all the lures you own and you need to pick one that will help you find the animal species you are currently hunting.

The third slot can be used to equip a pheromone, which will increase the chance for a rare animal to spawn (there are common, uncommon and rare animals).

Once you’ve equipped your Tranq Rifle from the gear wheel you will also see new symbols appearing on the minimap on the top right corner as well as on the big map.

From now on you need to repeat four different steps for each animal you want to capture and conserve:

Head towards one of these symbols and find the starting point for your hunt – a pile of poop, left by a certain animal. Go towards that pile and press ‘Track Animal’ to start the hunt.

Now a trail of footprints will start to appear and all you have to do for now is follow it until you’ve found the calling point.

At the end of each trail of footprints there will be a calling point and once you’ve reached that, the second step will begin.

After the first use the animal will respond with its own call and now you need to mimic that sound. Sounds complicated, but you simply have to make sure that the frequency of your call is similar to the sound frequency of the animal.

So make sure the blue and/or purple dot of your frequency-meter (appears on the right of the screen) is in the middle of the indicator. Follow that indicator to mimic the call.

If you successfully imitated the call, the creature will spawn somewhere close to you. Make sure to either use your audio input to hear from where it called before, which is a good indicator on the spawning direction.

Or use Primed Animal Instinct (or the normal version), because you will see the animal on your radar long before it approaches you.

Either way, make sure to equip your Tranq Rifle again (Slot 1!) and position yourself in a way that the wind won’t give you away (they might smell you before they are close enough to be shot).

Syandanas, the falling snow or the flora around you are good indicators. Once you have a clear shot, use your Tranq Rifle to tranquilize the animal.

After the animal got tranquilized you are able to quickly approach it. Call for a remote pickup and you’re good to go.

The quality of the capture depends highly on how fast you are and how startled the creature was. If you’re looking for a perfect capture you should try not to startle it at all – so don’t use your Warframe abilities to control it in any way.

The tranquilize effect only lasts for a few seconds, so make sure to be fast enough.

More info: Once the capture has been completed you can simply head to the next starting point and repeat steps one to four.

It is also important to note that you are able to find animals ‘in the wild’ on the Plains of Eidolon (so you don’t necessarily have to go through the four steps, but rather can just run around and try your luck), whereas you won’t be able to find free-roaming animals on Orb Vallis.

There are two main reasons why you are even attempting to capture and conserve the fauna of the Plains of Eidolon and Orb Vallis: You do get standing depending on how successfully you’ve hunted down the animals (there are ‘perfect’, ‘good’ and ‘bad’ captures) and which rarity the captured animal has.

But each successful capture also nets you a so-called tag, which can be traded in at the respective trader (again, Master Teasonai on Cetus or The Business on Fortuna) for really cute Floof Orbiter decorations as well as some cool-looking emblems.

From time to time you’ll find a Conservation quest as a weekly Nightwave mission, which will then not only give you tags and standing towards the main syndicates of the open world cities, but also standing for the current Nightwave season.

Even though you are able to successfully hunt with any Warframe in the game (as long as you make sure to watch the wind), there are some Warframes that will make the whole capture super easy.

They all have one problem though: Using the Warframe ability will decrease the quality of the capture and therefor the amount of standing you get.

There is however one exception from that: Using Ivara and her ‘Sleep Arrow’ will circumvent that as long as it is a direct hit.

So we really recommend using Ivara: Go invisible right before the animal spawns during the third step, switch to your Sleep Arrow and wait until the animal is close enough.

It also seems that becoming invisible brings the advantage of not emitting a scent, so you could also use Loki or Ash and try your luck with the Tranq Rifle.

Even though there are no weapons, mods or Warframes hidden behind the Conservation run, getting rewarded with the really cute-looking Floofs is more than enough motivation for a lot of players.

It is also totally okay to ignore the game mode and instead focus on some other content. But if you decide to start hunting on the Plains of Eidolon or on the Orb Vallis we really recommend to get as many lures as possible.

Don’t forget to pick a good Warframe and keep your eyes on the wind, or otherwise you might find yourself trying to catch a running animal.

In case we missed something (or if you have some more questions), please leave us a comment!