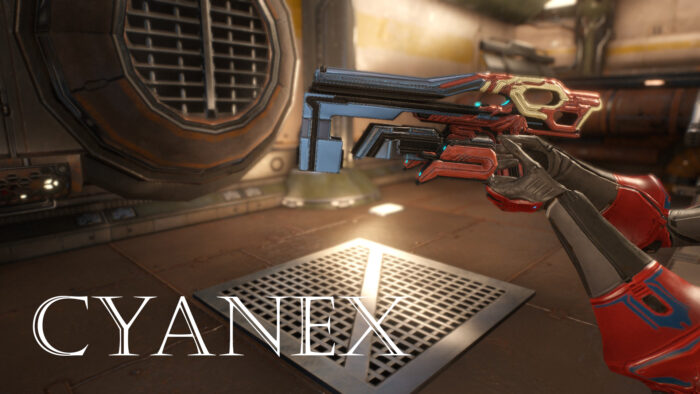 The Cyanex does have a very special place in Warframe history: Not only does the secondary weapon come with innate gas damage, but it also has a second fire mode that will rapidly fire all the bullets in your magazine with increased fire rate.

Not only will that increase your damage output, but change the damage procs from Impact damage on the normal fire mode to high Puncture and Slash damage on the rapid-fire mode.

The weapon was released with the overhaul of Jupiter and needs the resource Hexenon to be researched in the clan dojo as well as to be crafted in your foundry.

The Cyanex also is the derivative of the Spectra (researchable in the dojo), so if you do like that weapon, you will love this version!

To be honest, you are somewhat limited when deciding on how to build your Cyanex. The innate gas damage and the low critical chance doesn’t really allow you to experiment a lot.

You do want to use the high status chance and you want to do it while using the innate gas damage. The fact that you can also use Primed Heated Charge to increase your damage output by a lot adds another bonus.

You will also need a few Forma (around four to six, depending on your build) and honestly it isn’t really worth it unless you really like the Cyanex.

The weapon itself hasn’t the best DPS and there are plenty of other secondaries that are a better choice for your setup.

If you do however want to see the full potential of this weapon, go ahead and use your forma.

This is probably pretty close to what you will end up with, regardless of your ideas, if you are looking the find the best damage output with the Cyanex.

Magnum Force is actually very good on this secondary, because the reduction of accuracy is barely noticeable. Hornet Strike, Barrel Diffusion and Lethal Torrent are your standard mods and are probably found in almost every secondary build out there.

Primed Heated Charge (or the normal version) and Pathogen Rounds are great to increase the gas damage even further and Pistol Pestilence and Scorch are increasing your damage as well as your status chance.

You could try to fit in Pummel if you really need the extra impact damage, but usually you’re not going to need that.

The Cyanex does have an alternate fire mode and once you press the button to switch to it the weapon will unload itself with all bullets left in the current magazine.

If you want to build around that, you really want to increase your magazine size (Primed Slip Magazine) and your reload speed (Primed Quickdraw) to abuse the power of the burst mode.

Otherwise this build is pretty much the same as the standard build above, but you get less raw damage output for the possibility to burst enemies very fast.

This build is obviously more on the casual side of things, but you can still get great results with it. You need to get a feeling for the right moment to use your burst and you also need to make sure to take the projectile travel time into account.

After a few missions with this build you will understand where to aim, when to burst and how to kill all your enemies, so give it a try and have fun while doing so.

The Cyanex is pretty unique in its own ways and especially the burst mode in combination with the innate gas damage is a nice surprise.

That said, this weapon isn’t even near the top level of the current tier lists and will probably never be.

It is more of a casual choice as a secondary and if you do like weapons with projectiles that do have travel time and that can bounce of the ground or walls one time, give the Cyanex a shot. If not, don’t even bother using Forma on it.

If you think we missed some important information or if you want to share your own build, feel free to leave us a comment!