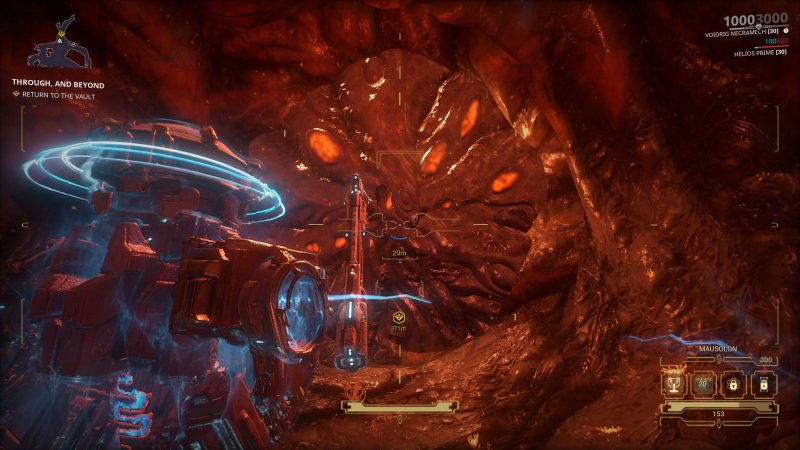 The Isolation Vault is a special bounty on Deimos, the Mars moon. It has no expiry, which means you can play it as often as you want at any time you want without having to wait for a cooldown or getting some kind of penalty.

While they do drop some resources and Relics, you mainly want to farm this special bounty for the Necramech parts, which will allow you to build your own, ancient robot suit. There is also a small chance for a Scintillant to spawn.

To farm for those special mechs you will need to open three Isolation Vaults in one wyrm cycle – which are currently 60 minutes long.

Since you’ll need about 15 minutes per vault run, you should make sure that there are 45 minutes left on the current cycle – or you might have to start over again.

It is also unclear if the devs mean that you need to do all three vaults in one session, since right now it seems that there is a bug where you get the rare reward even if the wyrm cycle changes.

To actually start the bounty, you need to head to ‘Mother’ on Necralisk, talk to her and start the mission.

Head outside and listen to Loid and Otak giving you some introduction to the quest before the first phase actually starts.

In the first phase you need to find a Bait Station, so follow the yellow quest marker.

Once you’re there, Loid/Otak will tell you to find some residue of one of the wyrms, with the amount depending on the number of players in your group.

So use your Archwing Launcher and fly towards the markings on your map. Look for the residue inside the marked circles and repeat the process until you and your team found enough of these.

Head back to the Bait Station, activate it and protect it for 60 seconds against incoming infested units.

Once you’re done with that, grab the canister from it and run towards the closed door, marked with a yellow quest marker.

Throw it against the door and proceed further into the cave.

The next phase is basically a three minute survival run: Stay inside the cave, kill all Infested and make sure to pick up the dropped infested eggs to reduce the toxicity amount.

Each of the dropped eggs reduces the amount by ten, so you don’t have to panic even if the toxicity amount reaches a higher level.

After you successfully survived three minutes, all spawned enemies will instantly die and a door will open, offering you a way inside the Isolation Vault.

Follow your quest marker and be prepared to fight the boss enemy.

Once you’re inside the Isolation Vault, Loid/Otak will explain that you have to fight Necramechs before you can search the vault in peace.

So follow the red quest marker and kill it. While you need to expect one Necramech in the first vault, multiple of these will spawn if you’re in your second or third vault run in the current session, so be prepared to fight more than one simultaneously.

The fight itself can be fairly chaotic, especially if you miss the transitions and get blasted by one of their attacks or by the damage-reflection-aura.

But if you’re being cautious or if you’re with a team that will revive you if needed, the fight shouldn’t be too hard.

Shoot down the arms and damage the main body as soon as it drops the invulnerability.

Once you’ve done with that, Phase 3 is finished and you could simply head out and get your reward. But it would be a waste of your time if you don’t go for the fourth phase.

Phase 4: Activate the Reactive Crystal at the Vault

This ‘hidden’ phase will not only grant you access to the loot room of the isolation vault, but if you finish it successfully, you will get another drop from the bounty loot table.

So start looking around for the closed door with an inactive crystal before it, switch into operator mode and blast the crystal with your special power (middle mouse button on PC).

It will activate and spawn Loid/Otak, which will slowly go back into the Isolation Vault and activate four different crystal parts. Protect it from incoming Infested units.

Once you’re done with that, head back to the locked door and solve the little puzzle: Four different symbols will appear on the door.

You have three tries and if you fail, the vault will be locked. If you succeed, the vault will open and you’ll get some nice loot as well as another bounty loot table drop.

Now you can either finish this session, head back to Necralisk and take your rewards – or restart the mission outside two more times.

The third vault – you might have guessed it – will offer you the rare drops, which is probably what you want to do.

If you’re having trouble doing it alone, try to find a group that will farm the Isolation Vault with you!

While there are many reasons to run through the Isolation Vault (resources, experience, fun, etc.), you probably are looking to get the best drops from the loot table.

Here is what you can expect:

Common Rewards (after one Isolation Vault)

The Best Warframes and Weapons for Isolation Vault

Fighting through all the Infested units can be fairly troublesome: If you’re planning to run all three vaults in one session, enemies will hit level 50+.

Bringing the right equipment is essential for your success and can make the difference between dying against Necramechs or fighting them without any problems.

Here are our top Warframe picks for the mission:

Weapons are also fairly important, especially during the fight against the Necramechs.

Bringing a Shedu or a Ignis Wraith is great, because the area-of-effect damage will help you during all phases.

But you could also try out your favorite shotgun or even a automatic rifle, as long as you bring the right damage type – Gas damage or Viral damage are probably overall your best bet.

The first run-through of all three Isolation Vaults might be a little bit complicated, especially if no one in your team has done that before.

But once you’ve gained a little bit of experience with the mission type, you will be able to drastically reduce the amount of time needed to finish the different parts.

If you want to share your own experience with the bounty or if you have some tips and tricks to add, make sure to leave us a comment down below!