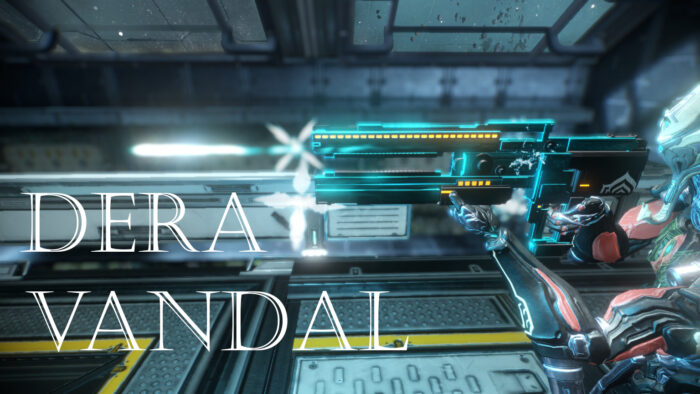 The Dera assault rifle is already a good primary weapon, known for its fast fire rate and high accuracy without any recoil.

The Dera Vandal is based on all that, but also features a higher status chance, more critical damage and better magazine size as well as overall just more damage.

Dera Vandal used to be rewarded for doing Sorties, nowadays you can simply wait for the Invasions to pop up and farm all the parts you need to complete the weapon.

And while this weapon isn’t quite on god-tier level, building (and using) it is very beneficial if you are looking for a good weapon during mid- and even late game.

Since the Dera Vandal is an assault rifle, using at least all the standard mods in your builds is highly recommended. That includes Serration, Point Strike and Split Chamber.

Usually you also want to build around the power of your weapon, which means you want to abuse the high status chance and good puncture damage if you want to strengthen your Dera Vandal even further.

Also don’t forget that the rifle is especially good against the Grineer. Depending on when you get (and want to use) this weapon, you either want to start out with a good and easy to obtain build or go straight for the best possible damage output.

We have different builds that support all of these intentions!

Oh, and if you are lucky enough to find a Riven mod, go ahead and reroll it until you find what you like! A Riven mod will increase your damage output with this weapon by a lot.

More damage, status chance or literally anything else will be super good, so don’t be satisfied with your rolls until you get at least three good stats on your Riven mod.

Two elemental mods, some extra fire rate and also higher critical damage is what you get, when you pick this build.

The mods are somewhat easy to farm and if you just keep progressing through the star chart, you should have most of these when you get to the point where you can farm (and build) the Dera Vandal.

Hammer Shot isn’t all that important and can easily be replaced by something like an extra elemental damage mod or Critical Delay for a higher critical chance.

Heavy Caliber is also a mod you might want to think about (and even try it out) during your early stages of the game, since it will increase your damage output.

The reduced accuracy however is especially frustrating if you want to kill mobs in long or medium range, so it’s not really recommended to use it.

But you can just try it out and see for yourself if your play style supports the lower accuracy or not.

This is probably the build you want to work towards to with the Dera Vandal, since you can reach 100% status chance with Malignant Force, Rime Rounds, High Voltage and Thermite Rounds.

This is pretty strong against a lot of different enemies and can help you kill huge mob groups in a few seconds or kill even super hard boss opponents.

Often times you the status procs endure through boss shields and keep on reducing the life points for a few seconds, even if the boss activated his or her shields.

Vile Acceleration also shines in this setup, because more shots mean more procs and better damage output. But you do need to get a feeling for your ammo usage.

Shooting a lot and fast means that your magazine will be empty pretty fast as well, so you need to either stop shooting and not waste ammo or run around while reloading, so you won’t get killed.

This build tries to increase the high puncture damage of your assault rifle even further and picks Piercing Caliber for that reason.

Combining it with mods for a better critical chance and Bladed Rounds for increased damage output can be very strong, but you do need to get those kills first.

Again, Hammer Shot isn’t a necessity, so picking literally any other mod you like might be a good idea. Getting a bit more critical damage and status chance is never bad, but you are free to experiment with other ideas.

While this build is weaker than the full status version, it might be nice to use against high level Grineer with high armor and health.

The Dera Vandal is a good and strong weapon that is easy to obtain and craft. You probably need to invest some Forma, but if you are looking for a good assault rifle while waiting to get one of the top tier weapons, this primary weapon is worth it.

Especially if you manage to find a Riven mod to support it. So take a look at the invasion missions and start farming all the parts, because you will like the Dera Vandal!