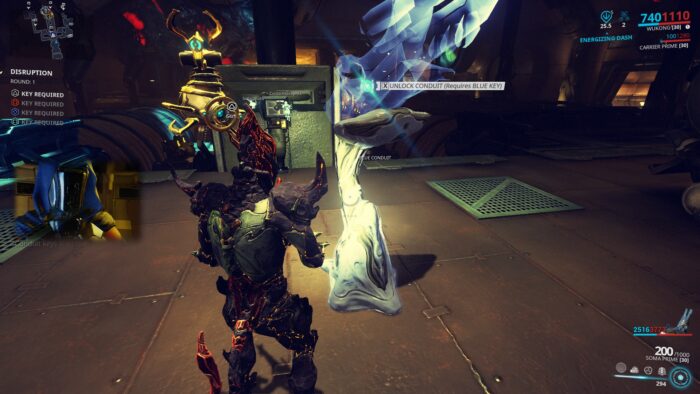 The endless mission type ‘Disruption’ was introduced during Update 25 and not only brought some fresh, new content into Warframe, but also set the foundation for even more content: Update 25.7 expanded the amount of missions from just one (on Jupiter) with six new Disruption missions all over the star system.

While it is often compared to Mobile Defense missions, Disruption features an unique play style and brings its own expectations, specifications and problems.

Luckily, we are here to help you out with everything you need to know and will tell you exactly how it works, what equipment you should think about bringing into the missions and you will also find some tips and tricks about the game mode. So keep on reading!

Once you’ve loaded into a Disruption mission you need to find the marked console and activate it, which will then start the endless mission.

If you rather wait for your team to fully load up, wait with activating it – otherwise go ahead. Once you’ve activated the console, you will be able to see four conduits on your HUD and mini map, which are colored in blue, cyan, white and red.

At the same time, enemies will start spawning on the map: You will get the normal enemy spawns, determined by the fraction of the map (Grineer, Corpus or Infested), but you also get Amalgam spawns.

Killing the latter will drop one colored key, which needs to be picked up and carried to the proper conduit (so the red key goes to the red conduit, etc.).

After you activated the conduit with the key, a timer will start and a Demolyst will spawn somewhere on the map.

The Demolysts are basically very tough Amalgams and only have one goal: Run towards the activated conduit and blow themselves up, destroying the conduit in the process.

Your job is to kill it before that happens. They do emit a beeping sound, so you will be able to hear them long before you see them. Run in their direction and kill them as fast as possible.

Once you’ve killed the Demolyst, the conduit is save and solved for the round and you only need to repeat this process with the other three conduit to finish your current round.

You can then either extract or stay in the mission to get fight more rounds and get better rewards.

If you lose all conduits in one round, the mission will be failed, but as long as at least one conduit survives you will be able to start a new round.

Even though the mode is fairly straight forward, there are some tips and tricks to follow.

Here are a quick ideas you should keep in the back of your mind and follow as needed:

Sometimes you get a second key drop for the same color (e.g. two red conduit keys). These keys will vanish after the round ends – unless you carry it in your hands. That way you can bring one key into the next round and speed up the whole round.

The Arcane (bought from Little Duck on Fortuna) for your operator will drop a Tether Mine right under you after you performed a Void Dash and traps enemies in range for four seconds. That way you can easily hold a Demolyst and kill it before it reaches the conduit.

You don’t have to do one conduit after another. If you have a good enough team you can activate them as you please and reduce the round time by a lot.

Just make sure that the Demolysts die fast enough before blowing up.

If everyone in your team is able to kill a Demolyst within a few seconds, spreading out on the map can reduce the time as well.

Demolysts usually spawn far away from the conduit they’re trying to blow up, so spreading out will make sure you’ll find it (and kill it) in a short amount of time.

The second you activate a conduit (using the right key) it will display either a buff or debuff. If you lose the conduit due to a Demolyst exploding and it had a debuff displayed, said debuff will persist until the end of the round.

If you kill the Demolyst in time and the conduit had a buff displayed, you will keep the buff until the end of the round. Here are all buffs and debuffs you might come across:

First and foremost there are missions for each of the three factions (Grineer, Corpus and Infested), but they also differ in enemy level and mainly in the drops you can get there.

So even if you manage to farm one of these missions for every drop, you probably will have to farm at least some of the other Disruption locations as well.

Here are all the Disruption locations:

It is also important to mention that Disruption doesn’t follow the standard AABC rotation system that most endless missions in Warframe use.

Instead you need to have an eye on your performance (the more conduits survive the better) and the round progression (later rounds have better drops).

It works somewhat similar to the Arbitrations mode, where you always get the higher tier rewards once you’ve reached a certain number of rounds.

The following schema sums up how the rewards are distributed:

So what that basically means is that once you’ve reached round 4, you will always get a C drop as long as at least three conduits survived.

If you are trying to farm for the Tier C reward (and you will do that), staying for a longer time is the best way to do that. It also means that you get your first drop chance for Tier C after three rounds instead of four!

We’re not going to show you the full drop table for all seven Disruption nodes, because you can easily find them at the official Drop Table or find them in the Wiki.

Instead we’re going to talk about the special rewards you’re going to farm Disruption for:

This is probably the main reason a lot of players are going to farm Disruption.

Tier C on Kelpie (Sedna) has a 10% chance (each) to drop the Gauss Chassis Blueprint, the Gauss Neuroptics Blueprint or the Gauss Systems Blueprint.

So keep on grinding the mission until you finally have all the blueprints needed.

They basically work the same way as the syndicate seeds (you might find these in syndicate missions) do, but they are without an affiliation to an syndicate.

They also can be used after you already maxed out your daily standing and still increase your standing with one of the six main syndicates (New Loka, The Perrin Sequence, Red Veil, Arbiter of Hexis, Cephalon Suda, Steel Meridian).

They are a reward from the Tier C pool and have a ~5% chance to be rewarded on every Disruption node (with the exception of Olympus, Mars).

Gauss’s signature weapons aren’t a reward for finishing Disruption rounds, but rather drop from killed Demolysts on the Dark Sector node Ur (Uranus).

With a fairly low drop chance (1,25% for each the Acceltra and the Akarius) you probably have to run the mission a couple of times.

The newest lens converts 3,25% of Affinity into Focus – which means the Lua Lens is ~44% better than the already great Eidolon Lens.

With a drop chance of 10,1% on Tier C on Appolo (Lua) it is also not unlikely to farm a couple of them in a fair amount of time.

The Best Weapons and Warframes

While there are a wide range of Warframes you could successfully play in Disruption, you really need a good way to kill the Demolysts as fast as possible.

Bringing a strong shotgun (e.g. the Vaykor Hek or the Boar Prime) or the current meta pick for secondaries – the Catchmoon – is usually more than enough.

High critical damage rifles like the Soma Prime or the Boltor Prime are also great picks.

You could even try and play a high damage sniper. In the end you really just need a weapon with enough damage output to burst down the Demolyst in a few seconds, so play what you like most (as long as it can kill stuff fast enough).

There are also a few good Warframes that will make the whole mission pretty easy. Here are our favorite picks:

With the release of Update 25.7.0 and the introduction of six new Disruption nodes, the mode actually became very interesting and fun-to-play.

Just make sure you understand the basic mechanics, bring a good enough loadout to stay for a couple of Tier C rewards and don’t forget to enjoy grinding through Warframe.

If you have some great ideas to add or if we missed some important information, feel free to leave us a comment and help out the community!