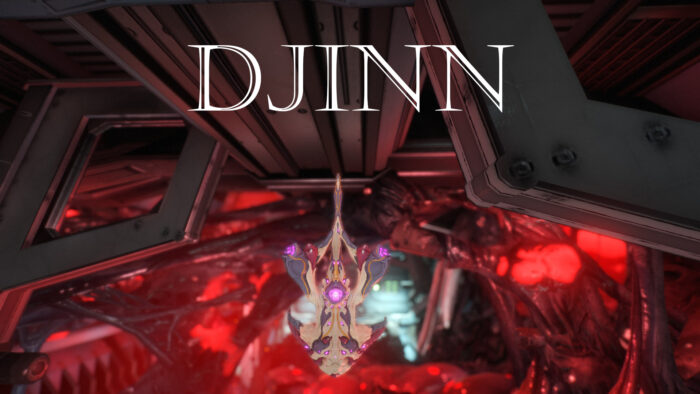 Every sentinel brings its own and unique mods as well as a special addition to the game.

Djinn is no exception here and is very strong during the early and mid game of your Warframe ‘play through’, but can also shine later on.

The reason for this are mainly his own and unique mods that work quite well with different melee builds and do bring some advantages for those situations.

But even if you don’t want to bring a melee build, Djinn can shine due to his very high attack range, which is the highest of all sentinels in the game.

Since he is also immortal once you’ve get the right mods, you really want to bring Djinn to long endurance runs, so you will always have the benefits of the equipped mods throughout the whole run.

Its sentinel weapon is the Stinger, which does have a few really great advantages, e.g. the guaranteed toxin status proc.

How To Get Djinn

With the introduction of Djinn, Digital Extremes locked a sentinel behind clan research for the first time.

Even nowadays you still need to get the research done in your Bio Lab before you can claim and craft the sentinel – or you could simply join a clan that already has the research done, that’s totally up to you.

The blueprint for the sentinel is super cheap and with 50.000 Credits second only to Helios (15.000 Credits).

After you bought the blueprint from your dojo, you also need to gather the following resources:

Especially the Mutagen Mass and the Forma might be very hard to get during the earlier stages of the game, but once you can freely join all the Invasion missions, do that and you will quickly gain the rare resource.

Don’t forget that you can buy blueprints from the dojo and craft one Mutagen Mass every 24 hours!

How To Get Djinn’s Unique Mods

While most sentinels nowadays really want to use the Assault Mode mod, Djinn brings an even better attack mod with him.

Instead of a 30 meter attack range, Thumper doubles this amount and gives Djinn and the equipped sentinel weapon an attack range of 60 meter.

But you also want to get the other two unique mods and increase your Djinn usability by a lot. Here is what you need to know:

Again, this is a really great attack mod and will give your sentinel and your equipped sentinel weapon a good attack range.

So if you really want to get the mod, farm endless missions on that tile set!

This mod will not kill the Djinn, but will deal a good amount of area-of-effect damage with a corrosive damage proc.

Cooldown of 30 seconds might seem somewhat long, but especially if you combine this mod with a melee Warframe build you will get some great damage out of it.

This mod will make your Djinn sentinel immortal, even though it takes at least 90 seconds to revive it upon death.

Even then this mod, which can be bought from Cephalon Simaris for 75.000 standing points, is very strong and way better than Primed Regen.

Again, there are some really great advantages to using Djinn’s exclusive mods and if you are trying to find a good companion for your melee Warframe or for a long endurance run, Djinn might be your best choice.

While you usually want at least consider finding a non-damage build and use your sentinel simply as a supportive extra, Djinn doesn’t really shine without its unique mods.

Those mods however reward you heavily for bringing a sentinel weapon and especially Thumper is just too good to be ignored.

Vacuum should always be an auto-include in any sentinel build, while Repair Kit, Enhanced Vitality and Reawaken adding a great amount of survivability to Djinn.

Theoretically you could even skip extra survival mods completely and just play Reawaken, but having regeneration and more health will increase the up time your sentinel has.

Self Destruct and Sacrifice work super great with Reawaken, while Guardian adds a nice bonus for your Warframe. Fatal Attraction is very strong, especially if you play a melee build and Primed Animal Instinct is just a great addition to every sentinel.

It does make sure you’re not going to miss scannable objects, Endo, mod drops or rare resources, so bringing it (or its normal version) is overall very rewarding.

Djinn oftentimes gets overlooked and ignored, simply because its unique mods aren’t as obviously great as other sentinel unique mods.

That said, the immortal part due to Reawaken is very strong and will make sure you will get the bonus of Vacuum, Primed Animal Instinct and other mods throughout your whole run. It doesn’t matter how often your Djinn gets killed, it will always reappear on your side and help you out.

If you think we missed another great build or some information, make sure to leave us a comment!