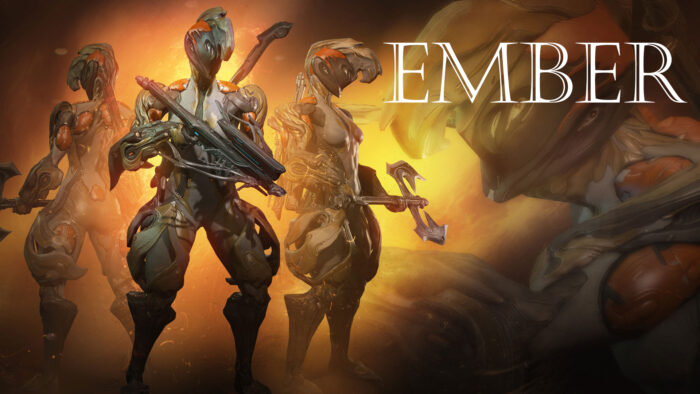 Even though Ember has been a member of the Warframe team since the beta version of the game went live and even though she has been a fan-favourite since that time, sadly she became less and less relevant since her remake during Update 22.12.

With ‘The Old Blood’ (Update 26) Ember got a complete rework, netting her a three new active and one new passive ability, raising her popularity once again.

This guide will provide you a few ideas on how to build your favorite fire based Warframe.

Ember is still fairly easy to farm and since her blueprints drop on Tethys (Saturn), she is often one of the first Warframes new players do acquire.

If you want to know more about how to get Ember and all her components, head over to our guide!

Ember Prime is a Caster-Warframe through and through, meaning you want to spam her abilities and use them to damage the enemies around you.

Picking Energy Siphon seems like the obvious choice in regards to her aura mod slot and often times it really is a great addition to your build and for your team.

That said, especially against higher level enemies you really want to bring Corrosive Projection and if you expect to meet a lot of status proc damage (e.g. against Toxin damage from the Infested or Slash procs from Grineer weapons) you might want to use Rejuvenation instead.

You could even pick Steel Charge if you want to go tanky and play with melee weapons.

Tip: If you want to know more about Amber and her abilities, feel free to take a look at the wikia page!

This is the best version if you are looking to use Ember as an area-of-effect nuker: Your ultimate ability ‘Inferno’ allows you to hit everything on your screen as long as it is range (meaning you won’t hit enemies behind you, but enemies behind a wall!), which is really great and fun to play.

The goal of this build is to deal as much damage as possible with just a single activation of your fourth skill, so we will completely ignore ability duration. Instead you do want to get a decent amount of range (though not the maximum amount) which is why you want to pack Overextended and Stretch.

Even though the damage reduction of Overextended is quite a lot the extra range is totally worth it.

The combination of Primed Flow (or normal Flow) and Fleeting Expertise gives you enough energy to work with, even if you have to fight multiple mob groups at once.

Don’t forget that ‘Inferno’ only reduces your energy depending on how many enemies are getting hit by it – if you activate it without any enemies near you, you won’t lose any energy.

You also want to get as much ability strength as possible, so you really want to use Transient Fortitude, Intensify and Blind Rage.

You could even use Umbral Intensify and Umbral Vitality instead of the normal version, but only if you use your Umbra Formas on Ember.

Vitality is your only survival mod and usually more than enough, but there are also scenarios where you don’t even need it.

Streamline or even Exothermic are great mods to try out instead!

If you are looking for a build that will allow you to use all your skills simultaneously you probably will end up with something looking like this.

You’re not going crazy in either direction (damage, range or strength), but you will still be able to kill most enemies without any trouble while getting enough benefits from your ‘Immolation’ ability.

Don’t forget that using your third skill will reduce Immolation’s meter while your Inferno ability will increase it.

The game plan here is simple: Activate your Immolation and use your third and fourth skill to reduce the armor and then kill all enemies around you.

The build itself is fairly standard and you obviously can change the exilus slot mod however you like.

We prefer a little bit more range, but in the end you are free to pick whatever suits you and your play style.

Augur Reach is probably the weakest mod in this build and depending on your needs you could switch it out for something like Fleeting Expertise if you find yourself having energy troubles, for Augur Secrets if you need a little bit more ability strength or for another survival mod.

Ember Prime is still one of the greatest Warframes out there and especially new players will get a huge boost using this Warframe.

She doesn’t need the perfect build to be strong and especially if you simply put on some strength and efficiency, her ultimate ability will kill everything in range.

She is also pretty good for farming Focus since you will get a lot of kills and therefor a good amount of bonus experience.