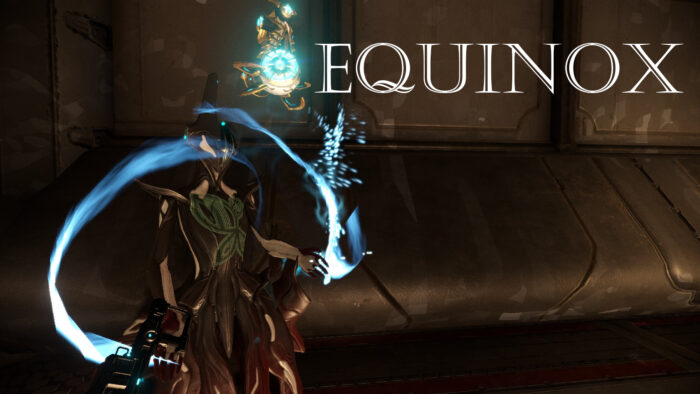 When Day becomes Night and Night becomes Day it is the time of Equinox.

This Warframe changes between his dark and light side and with those changes his abilities switch as well – which is kinda cool if you think about it.

Even though she isn’t the most popular one in the game, she has a lot of different build options and can be played in various environments and group compositions.

Her skill set shines with crowd control, damage and heal, which makes her very viable in certain roles.

Farming her is somewhat annoying and frustrating, since you need to farm her night aspect parts as well as her day aspect parts – meaning you need to get eight parts from Tyl Regor on Titania, Uranus.

Farming this boss over and over feels stupid at times and is a bit too grindy. But once you finally build her you are going to like her.

In case you still haven’t gotten your hands on the great Equinox, head over to our ‘How to get Equinox’ guide and learn everything you need to know!

Picking the aura slot polarity for Equinox is pretty easy: If you plan on using her for melee only, go with Madurai and the Steel Charge mod, otherwise use the Naramon polarity and Corrosive Projection or Energy Siphon if needed.

Especially the armor reduction is very strong with the different builds and will help you and your team defeating your enemies faster.

You should keep in mind that you don’t really need to invest a lot of Forma if you want to specialize on only one build, but if you want to change between different approaches you do need at least four Forma.

Tip: If you want to know more about Equinox and her abilities, feel free to take a look at the wikia page!

This version is a crowd control build, that is mostly used to farm solo missions or Focus, but can also be adapted for team play.

It basically revolves around your second ability and the augmented mod Calm & Frenzy.

You activate Rest & Rage while aiming for an enemy, rush towards him and use your melee weapon to kill those enemy.

Every mob around that killed enemy will also be affected and can quickly be dissolved by your attacks.

Since killing sleeping enemies does count as stealth kills you can quickly get the stealth affinity bonus up to 500% and therefor gain a lot of bonus affinity and focus.

If you don’t care for that, you can use this build just to crowd control your enemies.

The build itself should be fairly easy to understand, since you simply stack a lot of range and efficiency to cast your second ability over and over again.

Some duration is also nice to give you more time to get your kill, before you rush to the next enemy group.

Don’t forget that you need to one-shot sleeping enemies in order to get the affinity bonus, so pick a strong, long-range weapon like the Atterax, the Secura Lecta, Vaykor Sydon, Galatine Prime or any other staff or whip.

If you rather have more range than moving speed, go ahead and pick Cunning Drift over Rush.

Also if this is your main/only build for Equinox/Equinox Prime, feel free to use Steel Charge and switch the aura polarity.

Maim is your ultimate ability and allows you to deal area-of-effect damage in a huge area around you.

You can simply activate your third and fourth skill and move around in day form, dealing Slash damage with 100% status chance to every enemy in range, stunning them briefly during the first tick of seven.

Sadly, you can only affect every enemy once with your aura, meaning that you should use this particular build only against lower level enemies to make sure you can reduce their health to zero.

Your third ability Provoke increases your and your allies ability strength, which is why you should use it simultaneously with your Maim.

The build uses a good mix of range, efficiency and ability strength to kill your enemies while you are just running around.

This is super useful in endless missions and can quickly remove large mob groups from the map.

Just make sure that you always have enough energy and that you do move around in order to proc your Slash damage on every enemy.

Even though this build also uses Maim as a great way to kill a lot of enemies, it is very different from the low level Maim build mentioned above.

This equinox build will allow you to kill enemies with level 100+, but you do need to understand it’s basics and how your Maim ability actually works.

As a visual indicator you can simply take a look at your top right screen (left from your health and shield), where a counter will show you how much damage has been accumulated.

It will take some time before you get a feeling when you need to release your Maim in order to one-shot everything, but then you can simply run around and wait for your Maim to gather enough damage points before you nuke everything in range.

This will deal huge amounts of damage and kill even high level enemies.

The mod choices should be easy to understand and if you find yourself having constant trouble with your low energy pool, just switch out Natural Talent for Primed Flow (or it’s normal version).

You can also switch Vitality for Redirection if you rather have more shields.

Of course Equinox doesn’t only shine as a DPS, but can also convince as a support and healer.

This build uses the night version of the Warframe and focuses on the third and fourth ability.

Again, watch your counter on the top right and release Mend once you have enough points accumulated to heal everyone in your group.

Range and strength are your main focus for the build, while you also use Streamline and Fleeting Expertise to get yourself more time to gather points for Mend.

Energy Siphon can also be switched out for Corrosive Projection if you are doing Elite Sanctuary Onslought or any team mission that requires another armor reduction mod.

Again, feel free to switch out Vitality for anything else you need – it can even be a Umbral Intensify (or the normal version of the mod) if you want to boost your healing abilities even further!

Equinox is just a really fun-to-play Warframe with lots of different approaches.

You do have seven unique abilities that you are able to build around and even the augmented mods are really useful.

Yes, you do need to invest some Forma, especially if you want to use more than one build.

But once you get there (and manage to actually farm the Warframe), you’ll be happy to have and use Equinox.

So feel free to copy these builds, change them to your needs and just have fun playing!