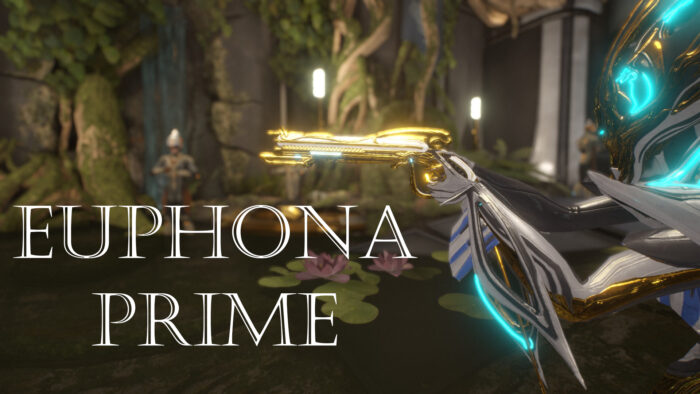 As the designated signature weapon of the primed Banshee Warframe, Euophona Prime brings a lot of damage as a sidearm as well as two different fire modes.

It is also a very good choice for a secondary weapon and features two completely different ways to use and build the weapon.

Depending on what fire mode you prefer you should also change your Warframe pick or at least modify the build a little bit. The ‘Slug mode’ works like a standard revolver and allows you to fire single shots at your enemies, even at longer ranges, without any problem.

That means it is a very good choice for every Warframe in the game and can be combined with caster or supporter as well as with tanky Warframes.

The ‘Buckshot mode’ basically works like a shotgun, which means a low range and damage falloff.

Therefor you rather want to pick a Warframe that feels comfortable fighting in shorter ranges.

Again, before starting to put mods into your Euphona Prime you need to decide whether to use the ‘Slug mode’ or the ‘Buckshot mode’ in your missions.

Obviously you can always use both (and it also works somewhat reliable to use them together), but you really want to build around only one of these modes.

The ‘Slug mode’ really benefits from increasing the critical damage output, while you want to bring status chance and elemental damage for your ‘Buckshot mode’ builds.

In theory you could also find a build that boosts both modes simultaneously, but that isn’t really worth it at all.

Tip: If you want to know more about the Euphona Prime and its abilities, feel free to take a look at the wikia page.

Not a lot of secondary weapons are able to reach 100% (or above) critical chance, so bringing the Primed Pistol Gambit and Creeping Bullseye is super strong.

Using Magnum Force over Augur Pact would be a great addition, but you really don’t want to reduce your accuracy in a weapon that only has five bullets per magazine.

The other big surprise here is probably Primed Quickdraw (you can always use the normal version if you don’t have the primed mod), because this mod isn’t used all that often.

But adding it to this build is very beneficial and nearly a ‘must have’, simply because the reload speed is otherwise super slow.

You could think about bringing in Pummel for some increased Impact damage, but generally speaking you don’t really need that.

If you want to be fancy, you might add Hydraulic Crosshairs and get some even bigger critical hits going.

This fire mode is completely different from the ‘Slug mode’ and works like a shotgun.

That means that you really need to get up to 100% status chance to really get the status chance working, which also means you are already set in to use Pistol Pestilence, Jolt, Frostbite and Scorch.

Just make sure to either get gas damage or blast damage with your elemental mod placement.

Magnum Force is a great addition here and since you don’t really care about the accuracy reduction you will get a lot of damage out of this build.

Primed Heated Charge is mainly used to increase your damage output even further but could also be something completely different – Primed Quickdraw or Lethal Torrent come into the mind, but even adding Maim for some extra Slash damage wouldn’t be bad.

While playing with this build make sure to get a good feeling for the damage falloff, which already starts at six meters and reaches it maximum at twelve meters.

So you really want to be close to enemy groups and bring a Warframe that can handle the more dangerous proximity to enemy weapons.

The Euphona Prime is two great weapons, combined into one entity: It doesn’t really matter which mode you prefer as long as you use a build that underlines the different advantages of the weapon.

Another bonus is the fact that you don’t really need a lot of Forma to complete your builds with the weapon – usually two or three is more than enough.