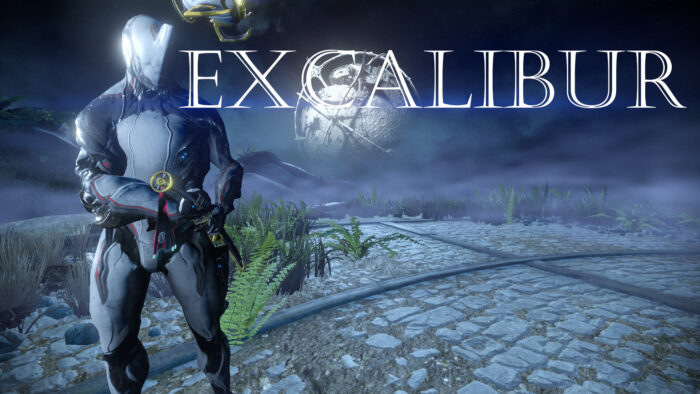 One of the oldest and most beloved Warframes in the game is Excalibur. For multiple reasons he does have a very special role for Warframe and Digital Extremes, beginning with his primed version.

Nowadays you are not able to get your hands on Excalibur Prime, because he was only obtainable by purchasing the Founder Package back in the day.

For a long time you were only able to play with his normal version, even though he was one of the original Warframes released.

And while Digital Extremes said multiple times that they will never ever release Excalibur Prime (as a special ‘gift’ to people that purchased the Founder Package), they added Excalibur Umbra with the quest line ‘The Sacrifice’.

The Chinese server even got a special release with the Excalibur Umbra Prime.

The Great Swordsman is also one of the three starter Warframes, which is why a lot of newer players already use him pretty early on.

If you picked one of the other starter Warframes (Volt or Mag), you are able to get your hands on Excalibur by beating the boss on Mars until you have all the blueprints needed to craft Excalibur.

Modding this Warframe early on might feel a little bit problematic, but we are trying to show you a beginner build as well as late game builds here.

For the sake of this guide we will mostly focus on the normal version of Excalibur, but you can always try to find similar builds for the Umbra version.

Just use Umbral Intensify, Umbral Vitality and Umbral Fiber instead of the normal versions.

When it comes to choosing the aura mod, you almost always want to go with the Steel Charge, since it will increase the damage output of your abilities by a lot.

There might be very few missions where you rather have another Corrosive Projection in your group, but the extra melee damage is usually the best choice here.

Another important thing you should know is the passive ability of Excalibur: You do get 10% increased damage and attack speed as long as you are using a sword weapon in your melee weapon slot.

While equipping your weapon you can type ‘Sword’ in the search bar and see all the sword type weapons you own!

Tip: If you want to know more about Excalibur and his abilities, feel free to take a look at the wikia page!

Building your exalted weapon isn’t as obvious as you might think, because if you use the Chromatic Blade augment you can easily get up to 100% status chance without using any +60% status chance mods.

Increasing your status chance up to that 100% is very beneficial, because together with Condition Overload and the augmented mod (which will give you another status damage type) you can deal a lot of melee damage.

Otherwise you just want to add two elemental damage mods (make sure they are not overlapping with your chosen energy color) and otherwise bring in all the damage increasing mods.

Primed Fury and Primed Pressure Point are very strong, but you can always use the normal version. True Steel and Organ Shatter help out by increasing the critical damage and Berserker can further increase your attack speed.

If you rather have some more flat damage you could always switch out Organ Shatter for Spoiled Strike, which is not a bad idea at all.

Excalibur is one of the three beginner Warframes and a lot of people are searching for good builds, even though they don’t necessarily own all the mods needed to become the sword fighter they want to be.

This build features mods that are somewhat easy to get and abstains from using special or primed mods.

If you don’t have all the mods here (or if you can’t max them out yet) you have at least an early goal to work for!

You do want to use Vitality as well as Redirection for some extra survivability, especially if you are approaching enemies with higher levels.

Rage is a pretty rare drop from random enemies and if you are able to participate in the Ghoul Purge event, which pops up from time to time on Cetus (Earth), you can even get your hands on a Hunter Adrenaline instead.

Augur Secrets is another great mod from Cetus and can be a reward for bounties there. You also don’t need Rush at all, but it is a nice mod to use until you find something else.

The standard build revolves around your ultimate ability, called ‘Exalted Blade‘, which does activate your exalted weapon and will give you a huge damage boost.

Not only can you ‘shoot’ your sword slashes through the map, but you also gain a very strong sword that will kill enemy groups in no time.

Chromatic Blade (together with the Exalted Blade build from above) is key for your high damage output and you do want to get up to at least 180% ability strength to make sure to stay at the 100% status chance of your exalted weapon.

Primed Continuity helps out with the energy drain and also increases the duration of your second ability (‘Radial Blind’) a bit. While Stretch isn’t really helping out with your fourth ability at all, it does however give you a bigger radius for your Radial Blind skill, which can be a life-saver in certain situations.

If you ever feel like you are surrounded or like you are about to be obliterated, just press ‘2’ and you should be able to save yourself (and your team mates).

This Excalibur build is a little bit weaker than the standard version, but can be super fun to play. It allows you to dash through the map and kill everything and everyone in your way.

It doesn’t work with Condition Overload though, so sadly you’re not gaining the bonus here. You do however want to get a good combination of ability strength, range and efficiency to enable a good damage output against lots and lots of enemies.

You could also switch out Vitality for any other survivability mod (looking at you, Redirection) or even cut Streamline for Steel Fiber to get a little bit more tanky.

Other than that, this build is pretty straight forward and if you don’t bring it to higher level enemies (level 50+) you will have a lot of fun with it.

Sometimes (especially against high level enemies) it is useful to bring a tanky build while still being able to deal a good amount of damage.

This version tries to combine the benefits of the standard build with more tankyness. Adaptation and Steel Fiber are great additions, while Hunter Adrenaline makes sure that you will never run out of energy against your enemies.

You still want to bring the Chromatic Blade augmented mod and Primed Continuity will once again help out with the energy drain and the duration of your second ability.

While playing this build, make sure to learn it’s strength’s and weaknesses.

Sometimes you need to use your first ability to become invulnerable for a moment, then use your second ability to blind everyone in range before killing all mobs with your sword.

Especially against high level enemies you need to get a feeling on when and where you need to attack and get some good timing for your abilities.

This is a very special build and only viable for the Excalibur Umbra version of the Warframe.

If you switch to the operator mode while using the Excalibur Umbra, the Warframe will switch automatically to the sentinel mode and start using all the equipped weapons to defend himself and your operator until the Warframe is at zero life points.

That means that you want to build the sentinel as tanky as possible, which is why we are at the current build.

Umbral Intensify is pretty useless, but allows you to boost your other two Umbral mods by a lot – plus you already have the Umbra polarity in the mod slot.

Equilibrium is okay if you are switching back to your Warframe from time to time to get some heal or energy.

You could also use something like Rush in your exilus adapter mod slot, but that’s by no means necessary, so you can also just leave it empty.

You do want however to pick a very strong primary weapon, because in sentinel mode your Excalibur Umbra will usually play with the equipped primary weapon. Using the Kohm or something like the Rubico Prime is a good idea and thanks to the great auto-aim of your Warframe you can deal a huge amount of damage while playing with your operator.

There are several reasons why Excalibur is as popular as he is.

Obviously him being one of the three starter Warframes has a lot to do with that, but he also has a super unique and really great skill set.

There are also a lot of different builds and ideas on how to play him, so feel free to try out different settings yourself (and share them in the comments!).

But once you’ve finished The Sacrifice and got yourself the Umbra version of the Warframe you will see why everyone is so hyped about it.

So keep working towards that goal and don’t forget to have fun while playing with or without the Excalibur Warframe!