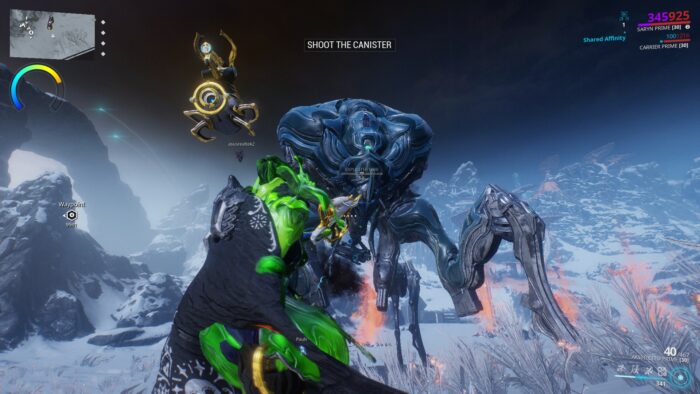 The Exploiter Orb is the second big boss on Orb Vallis and together with its ‘Big Brother’, the Profit-Taker Orb, it presents brand new challenges to the players, multi-phased fights and unique rewards.

Taking down the Exploiter Orb is also a very important part in getting all the Hildryn parts blueprints you need in order to craft yourself a Hildryn, so knowing where to start, what to do and especially how to beat the boss is obviously very important in that regard.

Sadly, the ‘what to do’ part isn’t obvious at all, because before you can start the fight, you do need to do some farming first.

The fight against the Exploiter Orb is somewhat similar to the Profit-Taker Orb, has different phases and you need to do variable things.

Also it is more of an mechanic and weapon fight, so there are some, but not big advantages to picking the right Warframe.

If you or at least one member of your team has a Diluted Thermia, you are able to start the fight. Before you can do that you need to reach Deck 12, an old and abandoned station, located in a cave northeast of the big Harindi Crater.

Get into the cave, follow the path, ignore the console in front of the door, get into the station and jump to the upper level on the left side.

You’ll find a console there which need the Diluted Thermia to become active.

So activate it and better get into cover, because the Exploiter Orb will come down from the ceiling and start firing at you.

In order to get to the first phase of the fight you need to shoot down both rocks the Exploiter Orb uses to stand on.

The boss will fall down and you can start the first phase.

Let’s take a look at what needs to be done in the first phase.

The Exploiter Orb has four vents and after it fell down, they are exposed and can be destroyed. So simply use your weapon and focus your fire on one vent until it is destroyed.

Now the Exploiter Orb will run through the other end of the room.

Your next task is to find Thermia Canister dispensers around the map and wait for a canister to spawn.

Grab one and use the alternate fire button to throw the canisters onto the remaining (and currently frozen) vents.

You can shoot them mid-air to reduce the amount of Thermia needed, but this is a lot harder to do.

You do need four canisters per vent or two if you shoot them at the right timing mid-air. Also make sure to kill all the nasty little mobs that will spawn during that whole phase.

Once you ‘unfrozen’ two vents, the Exploiter Orb will crawl into the middle of the room and lift itself up.

During this phase it will drop a lot of Coolant Raknoids (you already know them from the Diluted Thermia farming), which need to be killed.

Just ignore the Orb, dodge it’s attacks and focus on killing those Raknoids.

At the end of Phase 1 the boss will go back to the position where you killed the first vent and you can again simply use your weapons to kill the last vent.

Once you’ve dealt with that the next phase will start and you’ll need to leave Deck 12.

Tip: Shooting the canisters mid-air makes the fight faster, but also requires you to stand still for a moment, which will open you up to the high damage of Exploiter Orb’s attacks.

Simply throwing them (and not shooting them) can be safer and usually the first phase isn’t all that time intensive.

Here is guide for second phase.

In the second (and last) phase you need to get back out on the Orb Vallis, so leave the station and go back the way you came in.

Sometimes the doors won’t open immediately, so just wait until the Exploiter Orb is back outside. The doors will open and you can go and hunt the boss down.

Once you’re outside and near the Exploiter Orb, an temperature scale will appear on the top left side of your screen (right underneath your mini map).

You now have several things to do. First of all you need to shoot all Coolant Raknoids before they can reach the Exploiter Orb or they will cool down the boss, dragging out this phase even longer.

Once you’ve killed one of them, they will drop a Coolant canister, which needs to be put into a Thermia Fractures. Those spawn randomly on the field and will instantly fill a canister.

Drop a blue canister into the fracture and throw the now yellow canister onto the Exploiter Orb to speed the overheating up.

Do this until it overheated. You don’t have to shoot the canisters mid-air, but it will increase the heating if you do.

Jump onto the Exploiter Orb

When the Exploiter Orb is overheating, simply jump onto it.

This will trigger a cut scene and open up her engine.

Now use your weapons to shoot the engine.

You’ll see some flames coming out of the Exploiter Orb, so shoot there until you reached the damage threshold.

Now you need to repeat this process two more times (three times total) in order to kill the boss.

So shoot the Raknoids, put the canisters into the fractures, throw them onto the Exploiter Orb and shoot the engine.

Get the Loot and Get Out

The loot will drop the same way it does drop after you defeated the Profit-Taker Orb.

So gather your loot and then quickly get out of there, because the boss will explode and kill everyone and everything in the blast radius.

To restart the fight you don’t even have to go back to Fortuna.

You (and your team) can simply go back to Deck 12, activate the console with one Diluted Thermia again and fight the boss as many times as you want.

Tips: Phase 2 isn’t very challenging, but can be dragged out if you don’t kill the Coolant Raknoids fast enough.

So either make your team spread out or pick someone with a long range weapon who uses his Archwing to snipe the Raknoids before they can get close.

Also sometimes the Exploiter Orb will pick up Coolant Canisters dropped close to it, so make sure to use those as soon as possible or at least pick them up and drop them farther away.

Best Warframes for this Mission

Even though this boss fight isn’t really a Warframe fight, picking the right Warframe is always beneficial.

You should make sure to pick a frame with good survivability, because especially during Phase 1, the incoming damage is very high and one mistake can kill you (or at least down you). Here are some good ideas:

A defensive Saryn build will help you survive without any trouble, because the self-heal is super strong. The same is true for Inaros, Trinity or any other Warframe with high armor (Rhino), self or group heal (Oberon) or damage reduction (Gara with ‘Splinter Storm’).

Picking an invisibility Warframe like Loki or Ivara will allow you to ‘cheese’ the first phase, since you can simply pick up a canister and sneak close enough to get a good throw in.

Since those Warframes are generally squishy it is somewhat risky though and not the best pick for beginners.

Again, fighting against the Exploiter Orb doesn’t benefit all that much from picking the right Warframe. Getting Vitality against some slash procs or other survival mods is way more important.

Healing is always nice, but as long as you don’t get downed every few seconds you can play whatever you want and like.

While you do need a somewhat strong weapon for this boss fight there is no ‘best weapon’ to pick.

Rather bring something that can easily deal with shooting the vents during Phase 1 and the engine during Phase 2 while also being able to kill the mobs during the fight.

The Boltor Prime or Soma Prime are great, sniper weapons are also a good choice, since they’ll deal a high amount of damage per shot (especially if combined with a Chroma) and you can bows if you really want to!

Bringing weapons with area-of-effect damage isn’t really worth it, because you’re not going to fight larger groups of enemies while the lower range on those weapons can also become a problem.

So while the Tigris Prime is usually a super strong weapon, bringing it to this fight won’t help you out.

The Profit-Taker Orb is pretty hard and annoying. Fighting the Exploiter Orb feels way smoother and it seems as if Digital Extremes has learned from the previous boss.

The two phases are complex and somewhat challenging, but you’re not stressed out all the time. Just learn the different steps of the phases, know what to do and bring a Warframe and weapon that suits the fight.

You are able to do the fight solo and if you know what to do, you won’t have any trouble with that. But it is also super slow doing it alone, especially during the second phase where you need to throw a lot of canisters while simultaneously killing the Coolant Raknoids before they reach the boss. So it’s faster and easier to bring a team.

If we have missed any important information (or if you have more tips to share), leave us a comment and help out the community!