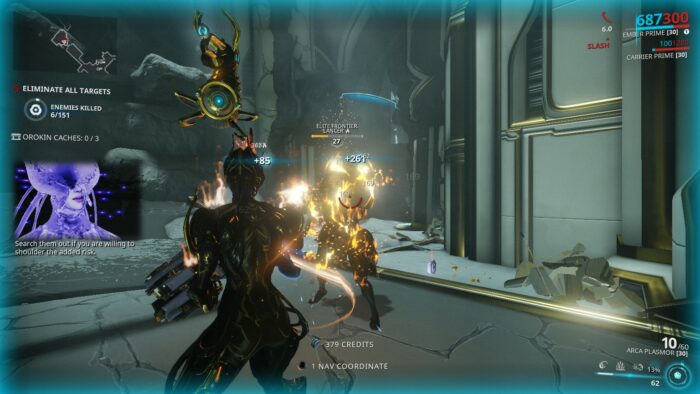 Exterminate is a very simple mission type that requires you to simply kill a certain number of enemies. Nowadays you simple follow the red marker on your map or radar and progress through the map while killing everyone and everything in your way.

Once you killed enough enemies (keep an eye on the kill counter on the top-left) you are able to go to the extraction point and leave the mission.

Some exterminate missions (Dakata on the Kuva Fortress and Plato on Lua) give you the opportunity to search and loot three resource caches, similar to the caches you find in Sabotage missions. For each cache found you do get a reward (you can find the loot table here) and if you find two or all three caches you do have the chance to get better rewards. If you want to search for the loot resources caches, go ahead and turn your volume up a bit, because the caches emit a sound that will help you find the hidden lockers.

If you are still in the early phase of Warframe and don’t really know what to look for or how to maximize your ability to clear stronger Exterminate missions these following tips might help you with your missions:

Also don’t pressure yourself to always be super fast!

It’s often times better to just wait a moment, regenerate your shield, health and energy before you engage the next group – specially once you reach higher level missions and feel like you’re not equipped enough to be there.

Exterminate Basics you need to know

Even though Exterminate missions are pretty easy and shouldn’t give you the hardest of times, some missions you will encounter will provide tougher conditions.

Here are same examples you should at least have heard of:

Another somewhat unusual thing you will eventually encounter are Exterminate missions that do switch into another mission type – or the other way around.

So if you’re running a Sabotage mission and suddenly have to kill a certain amount of enemies, don’t be alarmed, because that’s something that might happen!

Since Exterminate isn’t a endless-mission-type, going for a certain group set-up or picking a certain Warframe isn’t super important.

Generally speaking you can finish every Exterminate mission in the game with every Warframe as long as you bring a good weapon or simply use your abilities.

That said, there are some Warframes that will help you out a lot – especially if you plan on running a certain mission again and again to finally get the resource or mod drop you need.

If you are looking to optimize your Exterminate missions, picking one of the following frames is recommended:

Exterminate is probably the simplest mission type in the game, so don’t stress yourself with finding the perfect Warframe.

Unless you are planning on doing a special type of Exterminate just play whatever you like.

Often times you don’t even need to bring a strong weapon, because your Warframe and it’s abilities are more than enough to kill everything and finish the mission.

Nonetheless, if you want to optimize your build or weapon pick you probably should pick one of the following weapons:

If you love to play with a secondary or melee weapon, go ahead and do that! Those usually won’t be as fast or strong as your primary weapon choices but are certainly a good pick. And again, Exterminate is pretty simple and doesn’t require you to be overpowered.

2 thoughts on “Exterminate Guide for Beginners”