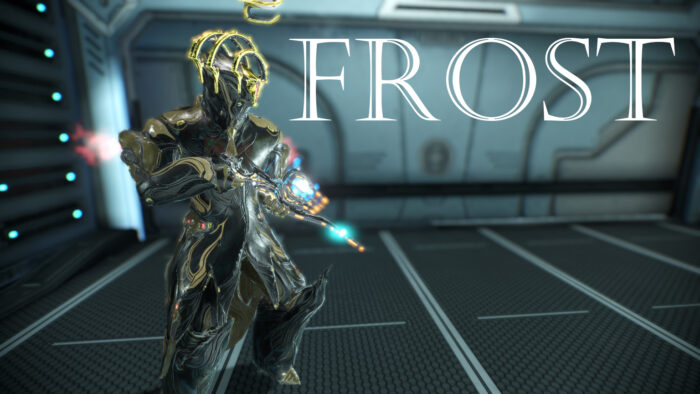 Frost was added during the beta and is part of the original crew. Primed variant Frost Prime was released few months later in May 2013.

Even though he is pretty old nowadays, he is still one of the most used Warframes in the game.

One of the reasons for that is his capability of providing a lot of defense to himself and his team mates and also the fact that he can be farmed relatively easy on Exta, Ceres.

The fight against Captain Vor and Lieutenant Lech Kril might not be easy for newer Tenno’s, but with some trial-and-error you will quickly get the hang of it.

Another great advantage is that you don’t really need a lot of Forma to use him in mid and even end game missions.

But if you ever get around to slap a few Forma on him, he will really exceed the expectations.

Fun fact: Frost (or at least his skill set) was developed from Digital Extreme to be used on an enemy boss from DE’s other game (Dark Sector), but made it into Warframe!

Frost can fill a lot of different roles, which is why picking the right aura slot isn’t that easy and really depends on what you want to do with your Warframe.

Corrosive Projection, Energy Siphon and Rejuvenation are good picks, but even Steel Charge or one of the amp auras might be useful, depending on your build.

Going for Corrosive Projection for late game missions is probably the best choice at some point, but you can still do really good and useful stuff with either aura. 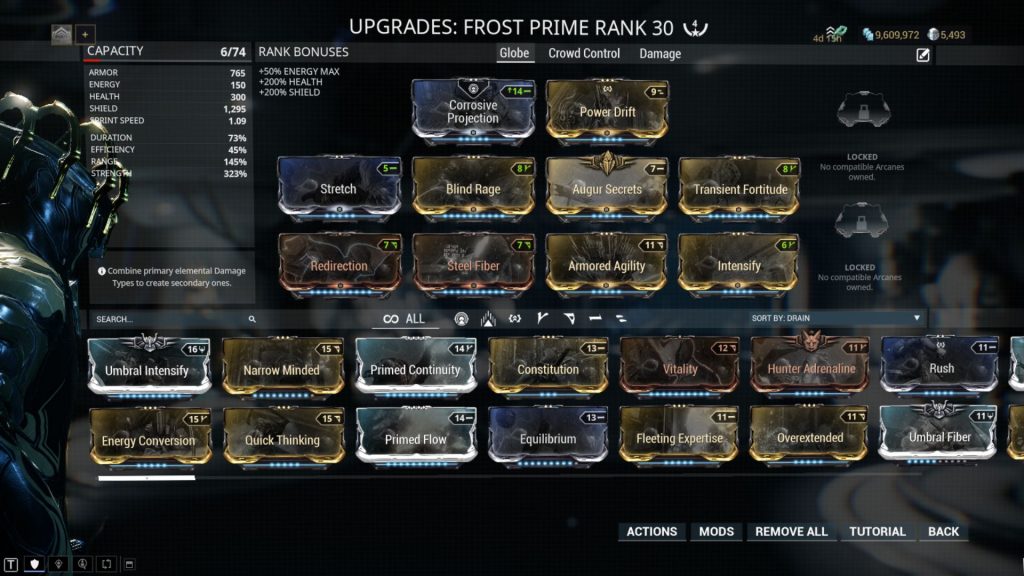 The main reason why Frost has this huge popularity among players is because of his third ability: Snow Globe casts a protective sphere around the Warframe, shielding everything inside it from outside shots.

That is super helpful in defense and mobile defense missions or excavation, but can also be used to shield a group during survival missions.

To be honest, you can probably use this build in every mission type that requires you and your team mates to stand around for a least a few seconds.

Are you planing on doing nightmare missions? Pick a Frost. Planing to do certain boss fights? A globe might help you! Do you need to quickly help a downed team mate? Snow Globe it up!

Even in Interception this build will help you, but don’t forget that you and your team can’t shoot through the globe from the outside. So don’t just place your snow globes randomly and don’t annoy your allies with it.

There are a few other things you should know about. You can remove and detonate your snow globes by simply using your first ability on it from the outside.

That is super useful to remove unwanted or useless spheres. It will also just disappear if a nullifier sphere touches it, so make sure to kill those mobs as fast as possible.

You can also have up to four snow globes at a time, but if you cast another one the oldest globe will disappear.

And last but not least: You can recast your third ability inside your snowball and those extra globes won’t count towards your four snow spheres. But the health of your globe can’t exceed 1.000.000 life points – so if you use this build you need to cast it five times to get the maximum health pool.

The build itself is pretty self-explanatory, since you just stack ability strength and extra armor to get a lot of Snow Globe health.

Stretch is usually enough range to cover up Excavators, defense targets or your team mates. But sometimes you need extra range, so switching in Overextended for Stretch (or for Augur Secrets if you need a lot of range).

Putting in the augmented mod Chilling Globe isn’t worth it, since you only freeze 50% of the incoming enemies. The only exception are missions against the infested – it’s not super effective, but still okay.

If you ever need to cast more globes or generally have problems with your energy management, switching out Augur Secrets or Redirection for Primed Flow or Fleeting Expertise will help you in that endeavor. 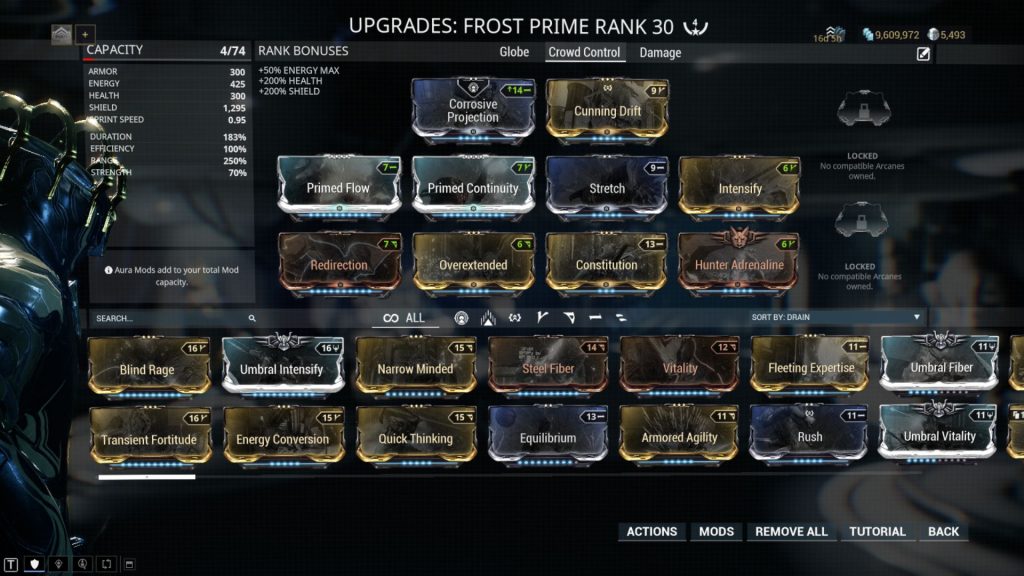 Your ultimate ability Avalanche doesn’t only deal good area-of-effect damage, but can also freeze every enemy in range for a certain amount of time.

You do want a good amount of duration and range to freeze them for as long as possible and hit as many enemies as you can. Intensify isn’t really needed and only helps with dealing a bit more damage, while Redirection and Hunter Adrenaline are your survivability strategy (more energy = more freezes).

You can change this build up so it will be appropriate for your missions and just use Streamline for better efficiency or Narrow Minded if you rather have more duration than range.

Icy Avalanche does look like a useful mod on paper, but to be honest you usually can’t abuse its power, since frozen enemies aren’t shooting at you or your team mates.

This build is really useful if you want to try to solo harder missions (Sorties, Axi fissure missions, etc.) or if you find yourself in a group that can profit from your crowd control.

Just try it out and you’ll be surprised how often you will benefit from freezing your enemies for some time! 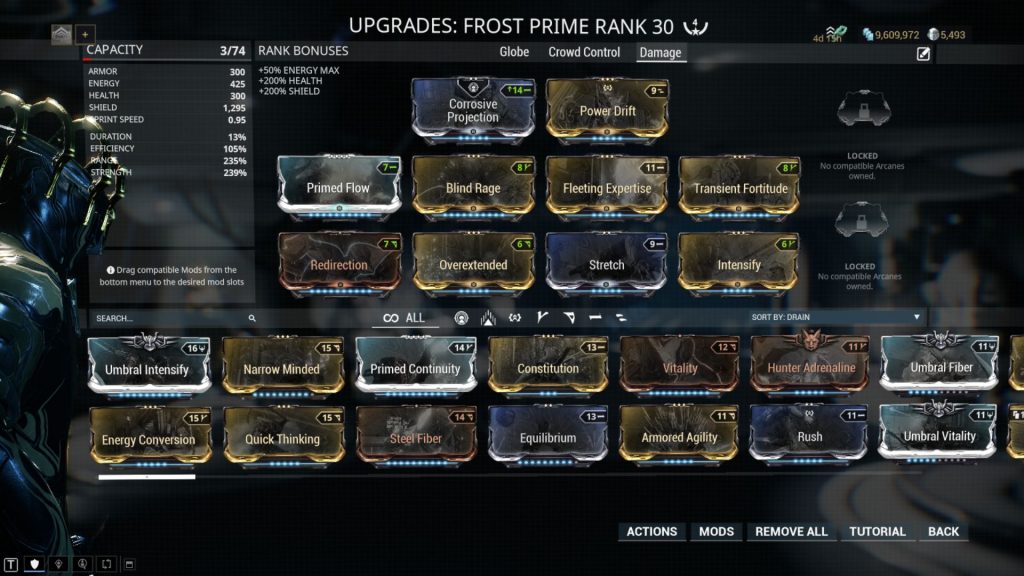 Last but not least you can build your Frost Warframe to deal a good amount of damage.

You can still use this build to cast a giant snow globe if needed, but generally speaking you want to spend your energy on your Ice Wave skill and if you do have a lot of energy income (thanks to a Trinity, team energy restores or a lot of energy sphere drops) you can also frequently cast Avalanche and kill everything.

You do want to combine range with strength to kill everything in your front and use Fleeting Expertise to cast as many skills as you need.

Redirection is your survivability mod in this build and can be switched for Vitality (especially against a lot of slash or toxic damage) or for Streamline if you plan to fight against lower level enemies.

You can play this build very successful in low and mid level missions and even deal a good amount of damage against higher level enemies, but you will need more energy on higher levels.

Playing it on Sortie or ESO isn’t recommended, since your damage output will quickly fall off on that niveau, but other than that feel free to try it out on different missions!

To this day Frost is still one of the all-time-favorites in Warframe and rightfully has a place on this list.

He is very versatile and even without any Forma you can use him in a lot of scenarios. Feel free to play around with the different builds and find the mod load out that will satisfy your needs.

Don’t forget that your first ability also slows boss enemies, so you often can just slow them down and kill them without any trouble!

So just try out the different ideas, have fun while doing so and enjoy your Frost.