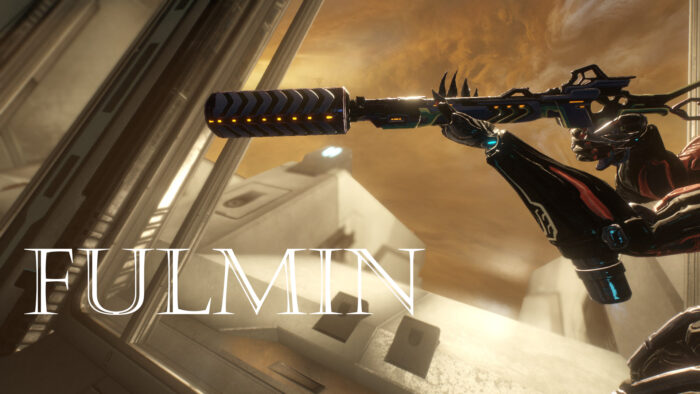 The Fulmin was released as Wisp’s signature rifle and not only comes with innate electricity damage, but is also able to work as a shotgun as well as a long range rifle.

If you use the Fulmin on your Wisp Warframe, the switch between normal shotgun mode and the alternate fire mode as a rifle is way faster than on any other Warframe.

Getting your hands on the Fulmin is pretty easy, because you can buy the blueprint in the market for 20.000 Credits.

Crafting the rifle weapon is a little bit more tricky: Besides some Argon Crystals and some more common resources you also need the Hexenon resource, which was released with the update that also brought Wisp, a new assassination target and a complete overhaul of Jupiter into the game.

To farm Hexenon you need to kill enemies on any Jupiter mission, so keep grinding for that!

Generally speaking, the ‘shotgun mode’ on the Fulmin features way better stats than the ‘rifle mode’ and will therefor be way better when it comes to dealing critical or elemental damage.

That said, each ‘shotgun’ shot uses ten bullets, so you will deplete your ammunition battery pretty fast, especially against larger groups of enemies.

Since there is no reload on the Fulmin (instead it works like an Archgun and regenerates ammo over time), you might find yourself in a situation where you need to kill mobs, but you have to wait for enough bullets to regenerate.

Another disadvantage of the ‘shotgun mode’ is the low range, because the damage falloff already starts at ten meters and at 20 meters you already hit your maximum range.

Our builds are usable with both fire modes and in the end it really depends on the situation and your personal play style when it comes down to choosing what mode to prefer.

You should also know that there is no extra bonus damage on head shots if you decide to play the ‘rifle mode’, so you don’t need to aim for the head.

Tip: If you want to know more about the Fulmin and its abilities, feel free to take a look at the wikia page.

Of course you don’t have to combine the innate electricity damage with toxin damage and you should always change the elemental damage type depending on the enemies you’re going to meet in your next assignment!

Heavy Caliber is actually a very great addition to the Fulmin, because this weapon features a very good, pinpoint accuracy.

So the reduced accuracy from the mod is barely noticeable, while the higher damage output is very strong. Other than that, this build is simple, but very strong throughout the whole game.

Due to the very high critical chance on the Fulmin, bringing a Hunter Munitions into the mix seems very beneficial.

Heavy Caliber is again a really great addition, while Critical Delay is probably the weakest mod in the build. Another great mod to use instead might be Argon Scope or even just a Bladed Rounds.

A disadvantage this build has is that it doesn’t use the innate electricity damage or the good status chance of the Fulmin at all.

So high level Grineer enemies with alloy armor are a big problem, while robotic Corpus mobs can be tougher, too.

In those cases it is probably a good idea to switch to the ‘shotgun mode’ and try to fight those enemies in close range combat – or just use your secondary or melee weapon instead.

The Fulmin is actually a pretty nice weapon and the combination of being a good rifle and a great ‘shotgun’ feels very rewarding.

Depending on your personal play style and the situation you can switch freely between long range or short range efficiency and kill a lot of enemies in a short amount of time.

The fact that the Fulmin doesn’t have a traditional magazine and no reload feels a little bit weird and unusual at first, but after a few runs you will start to adapt.

So get yourself the weapon, craft it and put a few Forma into it, because it is totally worth it!

If you think we missed a build or if you have some additional information to share, feel free to leave us a comment!