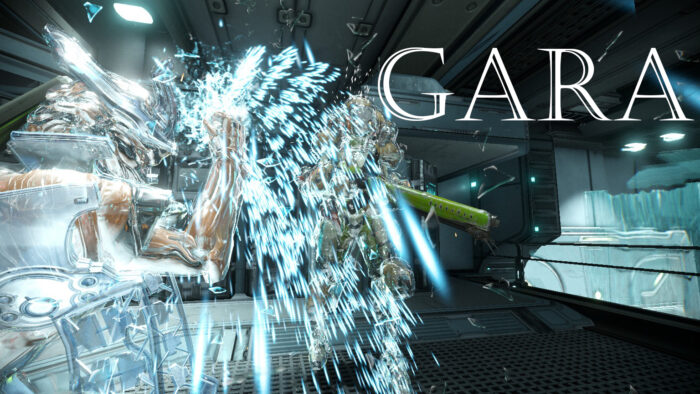 Gara revolves around a glass theme and can not only turn enemies into glass (and shatter them with her attacks), but also use glass to defend herself and her allies.

Since her release in 2017 you can farm her pretty easy by simply doing the bounties on the Plains of Eidolon. You probably have to run them multiple times, but you also gather standing for the fractions there, so farming her is worth it in more than one way.

While she has some obvious uses, some of her abilities are better than they look at first.

Especially if you love to play melee builds, you might be surprised what Gara has to offer. Also, feel free to experiment with her abilities and find other builds not mentioned here.

If you want to know how to actually get Gara, check out our guide on that!

The aura polarity highly depends on your main build, but unless you are prioritizing the melee version of Gara, get yourself a Naramon polarity.

If you however love to play with the melee build, consider switching to Steel Charge to amplify your melee damage even further.

Tip: If you want to know more about Gara and her abilities, feel free to take a look at the wikia page!

This build uses her fourth ability to deal huge damage to all enemies around you.

All you have to do is press 4, wait until you reach maximum duration and then use your first ability to shatter your glass ring from the inside.

This will push glass shards towards the outside, damaging (and killing) every enemy in range, while enemies inside your glass ring will be solidified for a few seconds.

If you wait a few seconds before shattering your glass, more enemies will be in range – so be patient. Also worth mentioning: As long as you cast Mass Vitrify you are invulnerable.

And try to be on a higher position, since the glass ring will extend towards the bottom, but not towards the top.

Choosing mods for this build is really a simple task, because you just stack range (Overextended and Stretch) with some efficiency and a good amount of ability strength.

You could also cast your ability with a lot of duration, but this would reduce the explosion range by a lot and reduce your damage output.

Vitality is your preferred survival mod in this build, but can be replaced by Redirection if you rather increase your shields.

Primed Flow isn’t super necessary, so feel free to replace it with another survival mod, more damage (e.g. with Energy Conversion) or with Natural Talent.

This build has two weak points you should know about: First of all, energy can become a problem if you spam your abilities.

So either find yourself a Trinity, use Energizing Dash or bring a lot of Energy Restores. Secondly, using your ultimate ability against Nullifier feels super bad.

Press 4 again before your wall hits the Nullifier shield and use your weapons to get rid of the Nullifier before shattering your glass ring.

This Gara build version doesn’t care about your damage output, but rather abuses the fact that every enemy inside the casting range of your Mass Vitrify will become solid frozen.

Since you are also invulnerable while casting your ultimate ability, you can use this build to fight against high level enemies and even survive for a long time in the Arbitrations mode.

So if you’re planing on doing survival, interception or something similar, give this build a try!

You want to combine high duration with good range and some efficiency and if you have some way of regaining energy, you really don’t need to use a Primed Flow since you won’t be spamming your abilities.

Another mod for survivability is a good choice, but getting more efficiency or Natural Talent is also a viable option.

Hunter Adrenaline should be seen as a Quality-Of-Life mod in this build and can be replaced as well.

If you do like melee weapons and builds, Gara does have a surprise for you!

Her second ability Splinter Storm will give you (or your allies) up to 70% damage resistance, deals damage to enemies in range (which is around melee range) and can even increase the incoming damage of enemies if you cast it on them.

And the best news: You can activate it on more than one target. So after casting it on yourself (and maybe your allies if you feel generous), go ahead and use it on your enemies before slicing the into pieces with your preferred melee weapon.

If you don’t plan to use it on your allies and enemies, you can drop the Primed Flow. Using your second ability as a shield is already fine and will help you out a lot.

The same is true for Streamline, which you only need if you plan on casting it a lot – which is fun and useful, but not everyone’s cup of tea. Good mods to replace them with are Hunter Adrenaline and Rage as well as Energy Conversion or Quick Thinking.

Those will help you to either increase your damage output or to survive while you’re speeding into your enemies’ faces.

Gara is a very good Warframe with great and fun-to-use abilities.

Sadly, she doesn’t feel as superior as other DPS Warframes and also lacks the ability to be as efficient with her crowd control as an Equinox, Banshee and others.

She is still nice-to-have and a good alternative to the current meta. So if you finally get to build her, go ahead and use some Forma – and then explore the different viable builds!