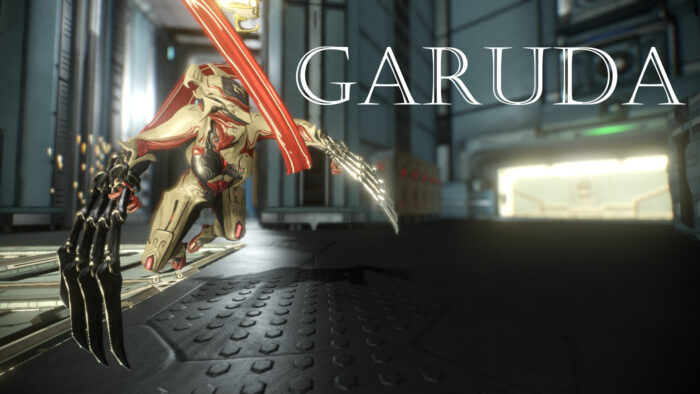 In the real world, Garuda is a bird-like companion and mount to the Hindu god Vishnu. In the Warframe universe at least the bird-like part still stands as she leaps with her bird-like claws into enemies, rips them apart and uses their life force to heal herself and her allies.

Oh, and she also has her own melee weapons. Her cold and calculating persona brings a fresh skill set into the game and will be forever bound to Fortuna, because you need to finish the main quest there before you can get the Warframe blueprint or before you can even start to farm her different parts.

She also needs very unique resources that can only be found on Orb Vallis, so while doing bounty runs or just exploring caves and fields on the open world, keep your eyes open for those minerals and rare resources.

If you want to know more about how to mod her, check out our Garuda Guide!

The Madurai polarity in the aura slot can be very nice if you plan on trying out a melee build with Garuda and plan on using Steel Charge.

Especially if you combine her first ability with a good melee weapon and Guardian Derision. But unless you plan to use that build as your Garuda main build, go ahead and switch the polarity for the Naramon version.

You’re going to use Energy Siphon most of the time and if you don’t, picking up a Corrosive Projection is always a good choice.

Tip: If you want to know more about Garuda and her abilities, feel free to take a look at the wikia page!

Garuda comes with her own melee weapons. To use them, simply remove your currently equipped melee weapon and you can access the Talons through the arsenal.

You only need to invest one or two Forma to make those claws work, so simply do that while you also Forma your Garuda.

Finding the right build depends on your own preferences, but generally speaking you do have two choices. The first one is shown here and builds on the strengths of the Talons, which is a high base damage, a very high status chance and already high slash damage.

Primed Fury and Primed Pressure Point are auto-includes in almost every melee weapon and Buzz Kill increases the slash damage even further.

Weeping Wounds and Blood Rush work very well with Drifting Contact and will even further increase your status chance and damage output.

It might take a minute to build up your combo multiplier, but once you got there you will deal huge amounts of melee damage. Again, if you want to use the Talons as your main weapon, picking up Steel Charge in your aura slot might be worth it!

The second build to tackle uses the four +60% status chance mods. So if you rather have 100% status chance, pick those four together with the usual mods.

But your damage output will be lower than with the first build and frankly, going full status chance with your claws just feels weak.

Garuda’s ultimate ability is called ‘Seeking Talons‘ and uses the might of her claws to inflict bleeding wounds to every enemy in range and also leave a mark to increase your damage against those targets.

While you might think that you’re going to increase your outgoing damage with a better build for your melee Talons, sadly this is not the case.

So in order to increase your damage output, pick up as much strength as you can, while still be able to cast your second and third ability to heal yourself while getting more energy.

Since those abilities are percentage-based getting Vitality wouldn’t really help, while Primed Flow does increase the amount of energy you gain from using Bloodletting.

The build itself isn’t very spectacular and straight forward: Natural Talent helps a lot with the casting time, since you need to channel your Seeking Talons for a moment to increase the area of effect.

Redirection helps to survive while you regain energy. Simply activate your second ability, stand beside the impaled enemy and spam 3 until you’re at full energy.

Mods to chance are Intensify for Umbral Intensify (if you find enough capacity), Steel Fiber for either more efficiency or Stretch (to increase the Blood Altar range) or Augur Secrets for one of those mods mentioned.

To fully use the potential of this build, find a good position before casting Seeking Talons. It will hit everything you can see on your screen, so covering space and positioning right is very important.

Also always have an eye on your energy pool, since this build has a very low energy efficiency.

So this build is more of the supportive variety and uses a high amount of range to increase the efficiency of Blood Altar.

Especially during high level missions like Sorties or Arbitrations, picking up this build might be very useful – as long as you combine it with a good weapon to have some damage output.

Primed Continuity and Constitution will give you a good amount of duration, while Redirection works as your preferred survival mod. Blind Rage will increase your healing capabilities, while the other mods increase the range.

Also don’t forget that you can always have more than one enemy impaled. So if you need faster heal (or simply want to cover more ground), impale three or more creatures and enjoy the incoming regeneration.

Of course you can (and should) use all your other abilities to increase your damage output, survivability and energy regeneration.

But the main point of this build is to keep you and your allies alive, so keep an eye on their health bars and movement.

This build is very much on the casual side and will probably not be very useful in higher level missions.

But if you are looking for a fun-to-play version of Garuda, this build might be interesting for you. Your first ability will let you pounce into an enemy, rip him apart and use his life force to create a shield in front of you that will block incoming damage.

If you press 1 again and channel it, you can use this shield to shoot a big bloody bolt at your enemies and deal area-of-effect damage.

Range will increase the blast radius, while you do need a good amount of efficiency to decrease the energy cost while channeling.

Natural Talent is very nice and a quality-of-life mod, Redirection is your preferred survival mod and Intensify increases the multiplier for the initial shield.

Intensify is also the weakest mod in this build and can easily be replaced with Primed Flow, a stronger ability strength mod or something like Steel Fiber or Vitality.

Garuda can be used in different roles:

Her Warframe weapons are unique and strong, so finding and playing a dedicated melee build might be worth the try.

Other than that, feel free to use the builds displayed here or simply find your own version – and have fun while doing so!