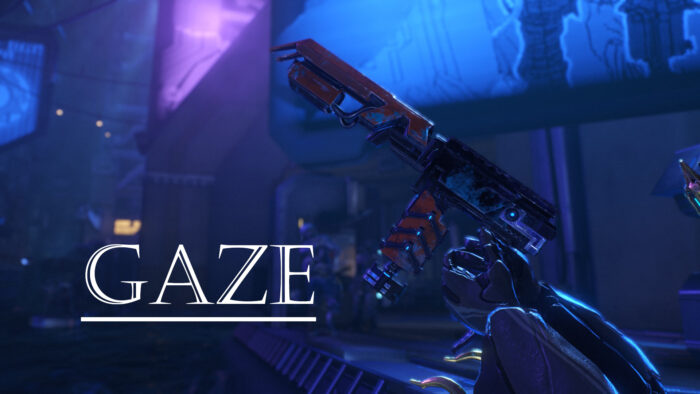 The Gaze is one of four Kitgun chambers and as such defines the way you’re going to build and use your secondary weapon.

It features innate Radiation damage as well as some decent Puncture damage, combined with innate Punch Through and the ability to chain the beam to up to two more enemies in range.

It is also the only Kitgun chamber that will base its range on the used grip (whereas the other three grips base their fire rate on the grip).

That’s also the main reason that crafting your Gaze Kitgun isn’t as easy and obvious as it looks: There are some fairly strong versions out there, but they really lack the range to be good.

Whereas you could find a long-range variant, which sadly can’t compete damage-wise.

This guide will try to give you the best possible solution and explain the mod choices that are best for the Gaze.

When building your Gaze you basically have two routes to choose from: If you’re going with the idea of using a long-range weapon, you do want to pick the Gibber as your grip, which will give you a range of 41 meters, but will reduce your damage by a significant amount.

So picking a critical chance based loader isn’t worth it at all, because doubling a low amount of damage just feels like a waste. Instead you want to go with the Ramflare, which will increase your status chance by a lot.

The second idea is to just go all-in on the damage output and use a Haymaker with your Gaze and a Splat as your loader.

That way you’ll get a decent amount of basic damage in combination with a high critical chance, but you do have to work with a range of only 22 meters.

In the end it is up to you which version you prefer – some people like to play in closer combat, while other tend to stay far away from any potential harm.

For this build we’re going to use the Haymaker + Splat combination. Modding the weapon is fairly straight forward and you do want to bring Hornet Strike for every secondary.

Primed Target Cracker and Primed Pistol Gambit are really great with our critical chance build and as you can see in the image above you will be able to reach 111.9% critical chance, giving you a lot of damage.

Even though you don’t have the best critical chance, bringing in two +60% status chance mods is fairly beneficial since the continuous beam damage will still eventually proc with close to 40% status chance.

We really recommend using either Corrosive or Viral damage to combat higher level and/or armor enemies.

Magnum Force is also great here, because the Gaze does feature a pinpoint accuracy, so the negative impact of this mod isn’t really noticeable.

Even though the extra multishot from Barrel Diffusion and Lethal Torrent aren’t going to influence the status proc chance since the Gaze uses a continuous damage beam, you will still increase your damage output by a lot.

For this build we pick the combination of Gaze, Ramflare and Gibber, which will give you a great base status chance.

You could even use the build from above and still get a decent critical chance, but if you’re going all-in on the status chance with your Kitgun build you should probably at least try out the full status chance build.

For that you simply use all four +60% status chance mods and arrange them in a way to either have Corrosive or Viral damage. If you are choosing Corrosive damage, you also get Blast damage, which is a great way to get some extra crowd control – especially since your damage beam can chain to other enemies within one meter of your current target.

You do reach 100% status chance here, which will allow you to proc your weapon with every damage tick. To increase those damage ticks you do want Hornet Strike and Magnum Force as well as as much multishot as you can get.

Even though you lack the damage output of the Kitgun we build above, you sometimes rather have the status chance – for example if you need to melt high armor enemies or when fighting the Profit-Taker Orb.

Even though the Gaze can have a satisfying damage output and kill high level enemies, it feels like this Kitgun has the biggest problems of all available chambers: Since you have to decide to either bring range or damage into the battle, you’ll never be totally satisfied with your Gaze build.

But if you don’t mind experimenting around a bit or if you already use a lot of shorter range weapons (e.g. Shotguns) you could easily have fun with the Gaze. Just make sure to use a good mod build.

If you do have some ideas of your own or if you found a mistake in our guide, make sure to leave us a comment!