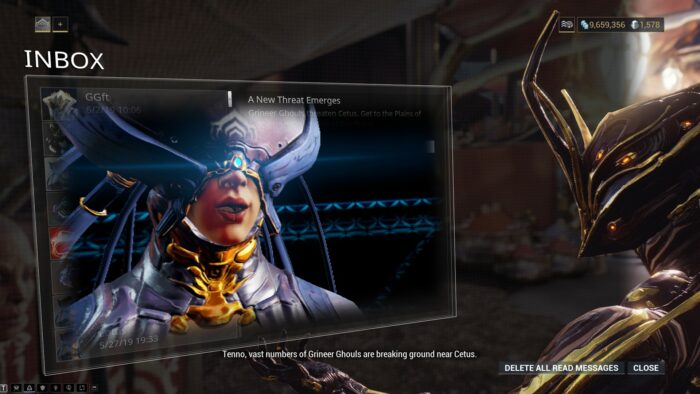 Every few weeks the Ghoul Purge event occurs on the Plains of Eidolon and basically works as special bounty missions.

The premise should be easy to understand: While Ghouls are always a part of the Plains of Eidolon experience, during the Ghoul Purge a vast number of them are roaming the land.

Konzu requests your help on Cetus and your job is to decimate the Ghoul population by running different missions.

During those missions you will meet an increased number on Ghoul enemies that are usually stronger than the ‘normal’ Grineer units you meet on Earth.

As an indication that the Ghoul Purge as currently an active event you will not only receive an Inbox message from Lotus, but you will also be able to see the event on the event-screen on your star chart.

If you want to participate in the event, make sure to keep an eye on the progress bar, because over time the Ghoul population will be reduced and eventually be purged completely – at least until the next Ghoul Purge starts.

The main reason why you’re going to participate in the Ghoul event and run the two different bounties multiple times are the six Hunter mods that only drop from Ghouls bounties, Ghoul enemies or from the Hemocyte, which is only available during the Plague Star event.

There are two different bounty tiers, with the first one having four stages with enemies reaching level 15 to 25, while the second one has five stages and will be sending you against enemies with level 40 to 50.

While the higher tier bounty will reward higher level relics (up to Neo tier) and more Endo, you can also get some special rewards from the first one.

Here is an overview of all the rewards you should try to get from Ghoul Purge bounties:

You can also get Cetus Wisp and Breath of the Eidolon as a reward, but those are not exclusive to the event.

To make this super easy and fast, everything that works for you in normal Plains of Eidolon bounties will also work here.

If you are looking for the best weapons to bring, usually some area-of-effect primary is a great choice. The Amprex comes to mind as well as the Arca Plasmor or something similar.

But as long as you feel confident enough to kill enemies with your weapon, you are free to bring whatever you want and like.

The same is true for picking the right Warframe and there are lots of great choices.

The best by far Mesa, simply because is able to kill a lot of enemies in a 360° degree angle while still being useful in all the different bounty missions you will encounter.

You could also think about bringing an Ember for the area-of-effect damage or play some utility Warframe like Nova.

The Ghoul Purge event is actually pretty funny and will not only help you out in raising your standing on Cetus, but the special rewards from the event are also worth getting.

The two weapons are okay, but not strong, whereas the different Hunter mods are often used in different builds.

The event is also a great way to earn Nitain Extract outside of Nightwave, so keep grinding those missions, because you will need the rare resource a lot!

If you think we should add some more information to this guide or if you simply want to share something with the rest of the world, feel free to leave us a comment!