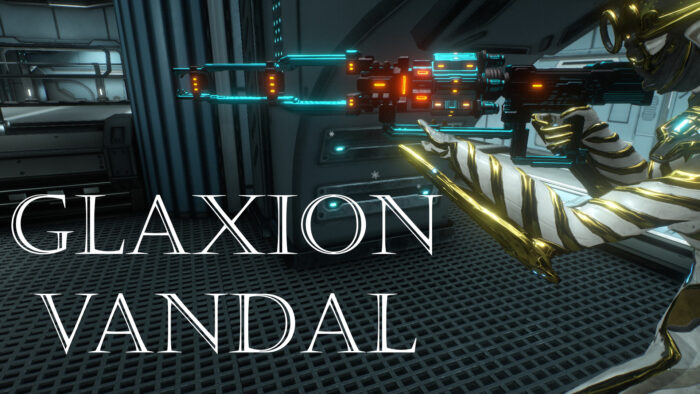 Are you looking for a better version of the Glaxion that also features higher damage, more status chance and better magazine size combined with a faster reload speed?

Well, look no further: The Glaxion Vandal was released as a reward from the Operation: Hostile Mergers endurance run and came with a pre-installed Orokin Catalyst and also a free weapon slot.

Another great advantage of this weapon is the innate cold damage, which can easily combined with other elemental types.

While the Glaxion Vandal is technically a rifle, playing with that weapon has its own unique feel.

The steady beam and the cold damage feels like playing the cold-pendant to the Ignis Wraith and while you can’t use the mod Firestorm here, you still get a long and very strong beam to kill higher level enemies as well as mob groups within seconds.

If you are looking for some build ideas on how to mod your weapon, you’ve come to the right place!

As with every weapon you do want to try and build around the advantages while also reducing the impact of the worst disadvantages if needed and possible.

For the Glaxion Vandal you do have to use the innate cold damage, which is very great against most Corpus and Grineer enemies, while a lot of Infested mobs have higher resistance against elemental damage based on cold damage.

That said, you can still bring this weapon against all the Infested units, because you’ll get a very good damage output. Just know, that the weapon is at its worst against Infested.

While the Glaxion Vandal also features a decent amount of critical chance, you really don’t want to build around that.

Tip: If you want to know more about the Glaxion Vandal and its abilities, feel free to take a look at the wikia page.

You always want to increase your cold damage, but you don’t have to use toxin damage to do that. You can use whatever elemental damage combination you want and need, depending on your missions and the expected enemies.

You could use Thermite Rounds and High Voltage instead to reach 100% status chance, but that’s not really needed for this weapon.

Since the Glaxion Vandal does have a pinpoint accuracy, using Heavy Caliber doesn’t really have any negative impacts on the damage output or your play style.

All the other mods are here to increase the damage output even further and shouldn’t be a surprise at all.

The Glaxion Vandal is a beam weapon and can use the Combustion Beam mod. While this build version is worse that the standard build, you might still want to try it out, just to see enemies explode and deal damage to other mobs while doing so.

This is way more on the casual and fun sides of things, but you can still deal decent damage with it.

The build itself is somewhat similar to the standard version, but instead of the high status chance you’re going to use Combustion Beam and Sinister Reach (for some higher range).

If you rather have the higher status chance, you might want to bring in Thermite Rounds and High Voltage over Infected Clip and Primed Cryo Rounds, but that’s up to you.

The Glaxion Vandal is actually a very nice addition to the game and a great upgrade from the normal Glaxion.

The continues beam is great and it really feels like playing something as the Ignis Wraith, but with cold damage instead.

Yes, you do need to put in some Forma to fit in all the mods you need, but it will be worth it. So go ahead, try it out and have fun while playing with this great weapon!