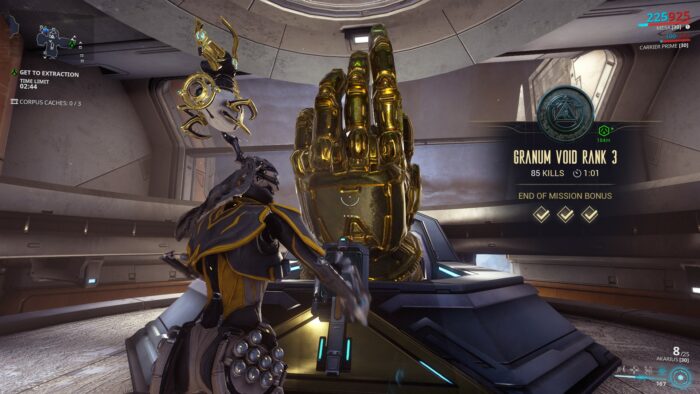 The Granum Void was added with the release of Update 28 and the inclusion of Protea.

While the new game mode can and will be used to farm for the Warframe parts, you also get new weapons, Credits, Endo and more by farming the mode on all three difficulties.

To gain access to the mode you need to finish the quest line ‘The Deadlock Protocol’ first, which can be activated from your codex.

The only prerequisites are a Mastery Rank of 4 as well as a play through of the Vox Solaris quest.

Once you’ve managed to do all of these you can finally start grinding through the Granum Void mode.

Before you can actually jump into the Granum Void and fight the Errant Specters, you need to start farming some of the so-called Granum Crowns.

These drops are only found on missions within the Corpus Ship tile set (click here for a full list) and you’ll need to wait for a Treasurer unit to appear.

Once you get the notification of a spawn ingame, start heading towards the Treasurer as fast as possible and kill it. If you’re too slow the unit will simply escape and you won’t be able to get another drop during this mission.

The Treasurer itself will appear after 2 to 5 minutes (non-endless) or 3 to 8 minutes (endless), so you might need to wait a bit if you’re running in a fast team.

There are three different Granum Crowns that can be dropped from a Treasurer, depending on the level range and the mission itself:

Each Granum Crown will allow you to enter the Granum Void once, so if you want (or need) to farm it multiple times you also need to gather more than one crown.

If you do have one crown in your inventory you need to find a Golden Hand Tribute (looks like the ones you’ve seen and used in the Deadlock Protocol quest) either in the same mission or in a new mission on the Corpus Ship tile set.

Activate it and spend your Granum Crown to finally gain access to the Granum Void. If you’re in the mission with a team, each member has 30 seconds to enter the Granum Void before the entrance will close.

Fighting inside the Granum Void

Once you (and your team) entered the void, a 60 second timer will start. During that time you need to kill as many Errant Specters as possible.

You can also increase/refresh the timer and add more seconds by either collecting the particles (the yellow triangles), which do increase your time by five seconds each.

Or you can free the three Solaris captives that are placed on the map, each giving you 20 bonus seconds.

The Granum Void fight will end if your time has run out or if you managed to get enough kills to reach rank 3.

In both situations you will automatically be teleported back to the hand statue from where you need to finish your current mission and extract.

The amount of kills needed to get a higher rank only depends on the amount of squad members in your group and isn’t influenced by the difficulty:

The reason why you’re fighting inside the Granum Void is fairly simple: You do get some fairly decent drops from this mission type, including Protea (read: How to get Protea), three weapons as well as cosmetics, Endo, Credits and more. Here are all the rewards:

The Best Warframes for Granum Void

Since time is an issue inside the Granum Void you don’t want to “play around” and bring your strongest setup possible.

Luckily the Errant Specters are easily influenced by your Warframe’s abilities, so bringing a strong DPS on a solo run is by far your best bet. Here are our recommendations:

There is no other DPS Warframe in the game right now that can compete with Mesa and her usefulness in an area with (almost) no walls. She can easily kill a lot of Errant Specters and carry you through the highest difficulty without breaking a sweat.

In lower difficulties, bursting the specters down can Ember be a valid strategy. Make sure to enter the Granum Void with maximum energy and keep spamming your Inferno ability.

Having a good mine build can be fairly strong in this mission type. Make sure to spam your mines and just watch your area-of-effect damage take care of the Errant Specters. Especially in a full group with more spawns you will be able to get a decent amount of kills.

Of course you are free to try out different Warframes, but unless you are in a premade group you don’t really want to pick something for utility or support.

A Trinity, a Speed Nova or even a Buffer Rhino are all good picks though if you manage to find a full, dedicated farming group.

While you are free to try your luck on all suitable planets, there are a few missions that will give you a faster run or bring fewer problems with them.

Here are the missions you might want to check out if you’re farming for a certain Granum Void difficulty:

The Granum Void is actually a fun new mission type that allows you to just go bonkers and kill everything in a huge areal.

Make sure to pick the right mission type, because rescue targets will follow you inside the void, life support will still run out while you’re fighting in the pocket dimension and you might even find yourself fighting against the Stalker or Zanuka Hunter inside it.

So plan accordingly and try your best loadout so your time doesn’t run out.