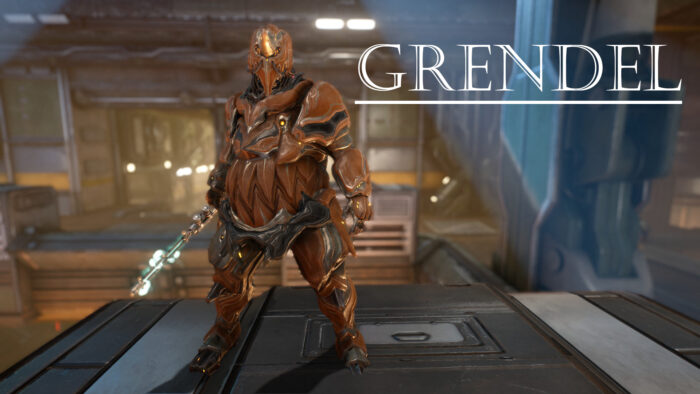 With his ability to devour enemies and keeping them in his belly until later usage, Grendel quickly got associated with the beloved Nintendo character Kirby.

The 42nd Warframe features a very unique skill set and not only looks very tanky, but also has a fairly high amount of health.

That and the fact that Grendel also has an in-build self-heal ability makes the Warframe a good survivor in all levels of gameplay and a decent pick even for high level content.

Getting your hands on the big belly Warframe isn’t easy, because you need to grind your way through Arbitrations as well as through some fairly hard special missions.

If you want to know more on how to get Grendel, we recommend reading our guide on that. If you are here for some ideas on how to mod your Warframe, keep on reading!

Before we start about the different build ideas for Grendel, we really need to talk about his first ability: ‘Feast’ enables all the other skills and without swallowing enemies you simply feel useless.

That can be problematic, because especially in lower level missions your allies often times kill enemies before you have the moment to eat and store them, making it hard to use your other abilities.

So you really want to increase your basic range a bit, find a good spot to stand on and try and feast on enemies around you. Don’t forget that you actually need to aim with your cross hair.

Another important node is regarding the mod Hunter Adrenaline: Even though we don’t use it in our builds, the super low shields and the high amount of health (especially if you use at least Vitality to increase your health pool) make it a good pick up.

You could often times try and use it instead of something like Flow or even combine it with Flow and Quick Thinking to become nearly un-killable.

We couldn’t really find a good way to build the ‘perfect’ tank with Grendel and still be useful, but if you find such a build, let us know!

We also need to mention that the ultimate ability ‘Pulverize’ is currently just not viable. The damage output feels bad, the movement is super clunky and especially inside corridors you can’t handle your Warframe at all.

This build fully evolves around your third ability, called ‘Regurgitate’.

The idea is fairly easy to understand: Swallow in a few enemies and then use these enemies to spit into groups of mobs, dealing a lot of damage with each ‘projectile’.

Often times you simply want to feast on three to five enemies and then start shooting, so you don’t need to go crazy on the efficiency.

The more enemies you swallow, the more energy you will need, so feel free to experiment on the need of Primed Flow and/or Fleeting Expertise.

Since we’re only using our second ability to heal ourselves as needed we don’t really care for a lot of ability duration.

Primed Continuity however is still a good way to reduce the energy drain, so use it (or its normal version).

You really do want to get a lot of range (which is why we picked up Overextended, Stretch and Cunning Drift). It will not only allow you to feast on farther away enemies, but also increase the explosion radius of your third skill.

If you don’t like the high range and rather have more ability strength you could simply switch out Overextended for Augur Reach.

And if you are willing to use an Umbra Forma on Grendel we highly recommend using Umbral Intensify over either Primed Flow or Overextended.

The mod choices shouldn’t be surprising, because we have a fairly basic buffer build here: Get as much ability duration as possible, combine it with a good amount of strength to increase your buffs and you are good to go.

Depending on your own play style and energy management you don’t necessarily need to pick up Streamline (especially if you have your Nourish buffs going all the time), but it’s not bad to have.

However, you really need to understand your second ability to get the most out of it. Your buffs will be applied based on what enemies you swallowed with your ‘Feast’ ability and in which order you’ve eaten those.

Also, ‘Nourish’ will deal a certain amount of damage to one enemy in your belly (again, based on the order you swallowed them) and unless that kills it you currently can’t cycle between enemies and therefor buffs.

Here are the enemies you need to eat to get the benefits:

The game plan is to swallow only the enemies you need for your buffs and use them to help out your enemies. Keep the buffs up all the time and recast them shortly before they run out to maximize your team’s damage output.

Grendel isn’t a meta breaking Warframe. His damage output isn’t the best, his supportive skills won’t be game breaking and his ultimate ability feels too clunky and useless.

However, playing with Grendel is actually a lot of fun: Feasting on enemies, shooting them through the map and from time to time trying to play bowling with your own body is actually very entertaining. And in the end that is enough reason to use him.

So give him a chance and try out our build ideas.

If you found another build or if you simply want to point out a mistake we made – don’t hesitate and leave us a comment!