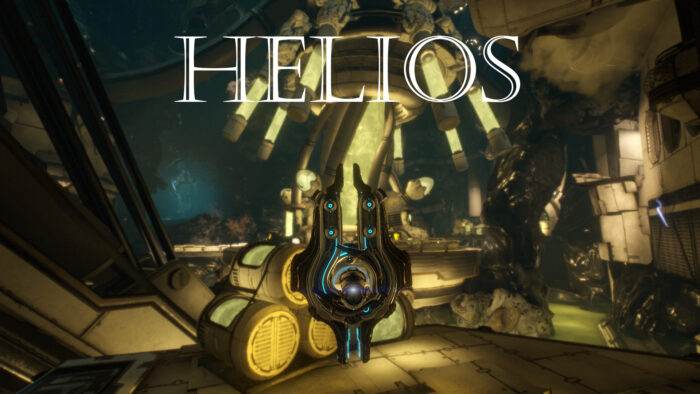 There are a lot of reasons why people do like to play with the Helios (or the Helios Prime) sentinel, starting with its really good own sentinel weapon, ‘The Deconstructor‘.

The sentinel also comes with three unique mods that are only usable by Helios itself.

One of the unique mods that you’ll be able to use with Helios is the Targeting Receptor mod, but you really rather want to use the Assault Mode mod.

It will not only give you three times the attack range, but also doesn’t bug out sometimes like Targeting Receptor does. You also don’t necessarily need to equip any attack mod to your sentinel and rather use the Helios as some sort of support companion.

If you are looking for more information on how to mod your sentinel or on how to get it in the first place, just keep on reading!

How to Get Helios

The difficulty of buying and crafting Helios really depends on whether you are in a clan that already has the research done or if you still need to do the research yourself.

Either way, you need to head to your dojo and check the Energy Lab for the blueprint, which can be bought for 15.000 credits.

Once you’ve got it, head back to your orbiter and start up your foundry.

To craft it you will need:

Especially the ten Fieldrons will take some time to gather, so keep grinding Invasions and make sure to craft one Fieldron every 24 hours.

If you do need some Oxium, make sure to go into missions with Corpus units and kill the Oxium Ospreys before they can self-explode.

How To Get Helios Unique Mods

Helios’ old unique attack mod, called ‘Targeting Receptor’, will be added to your inventory once you’ve finished building the sentinel.

But you really want to use Assault Mode instead, because it will give you a way better attack range.

The other two unique Helios mods are very useful, so you should aim to get these eventually and use them on your sentinel.

Here is how you find them:

While all the unique mods aren’t really looking powerful at all, they do add a few nice bonuses to your equipment and will not only help you out in the long run, but can be very beneficial by simply increasing your damage output.

Generally speaking, you do need to decide if you want to bring your Helios purely for its abilities to help you out during your adventures with different supportive functions or if you really want it to deal damage against your enemies.

If you pick the first option, you don’t need to equip an attack mod and you don’t want to bring mods that only work if your sentinel weapon dealt damage or killed enemies.

Besides saving some mod slots that way you only gain the advantage of not needing to rank up duplicate mods for your sentinel weapon, which otherwise will use your normal weapon mods.

Bringing an attacking sentinel and especially the Deconstructor into the mission has the benefit of dealing a lot of damage and being super strong throughout the whole game.

But you will need to invest a lot of credits and Endo, so be sure you really want to do that.

Assault Mode is a must-have in this build and the same is true for Vacuum, which is one of the best additions your companions can bring. Enhanced Vitality and Repair Kit are the defensive mods and will help to keep your Helios sentinel alive together with Primed Regen (or its normal version).

Synth Deconstruct is a good addition with the occasional health regeneration and Guardian is just overall a very strong addition.

Primed Animal Instinct (or the normal version of it) are also very strong, because you’re not going to miss any scannable objects (e.g. Cephalon Fragments), Endo, dropped mods or other special stuff ever again.

You will also see enemies coming before they are in range, which gives you more survivability in the long run.

And of course you do want to bring the two unique Helios mods and gain all the benefits associated with them.

If you really want to change something about this build, you might want to add Sacrifice over Synth Deconstruct, simply to gain a little bit more utility for your endurance runs.

Honestly, this build isn’t very different from the first version, but you get to use Synth Fiber with Enhanced Vitality and Repair Kit to make your Helios a little bit tougher.

You’re also get a free mod slot for Sacrifice, which will help you out if your team mates are too slow or if you do like to play in solo mode.

Otherwise you really want to bring all the other mods you are already using in the damage build, simply because they will help you out by a lot and make sure your game experience is going to be smoother in the long run.

A lot of people are playing Helios simply for the unique Deconstructor weapon, which is one of the (if not the) best sentinel weapons in the game right now.

But the added bonuses are also worth using and will help you out during the whole game, especially if you plan to fully fill your codex entries.

Sadly, using the Synthesis Scanner with your Helios won’t get your Cephalon Simaris standing, but otherwise it really feels great to get scans without having to do it manually.

If you think we missed some important information, feel free to leave us a comment and help out the community with your knowledge!