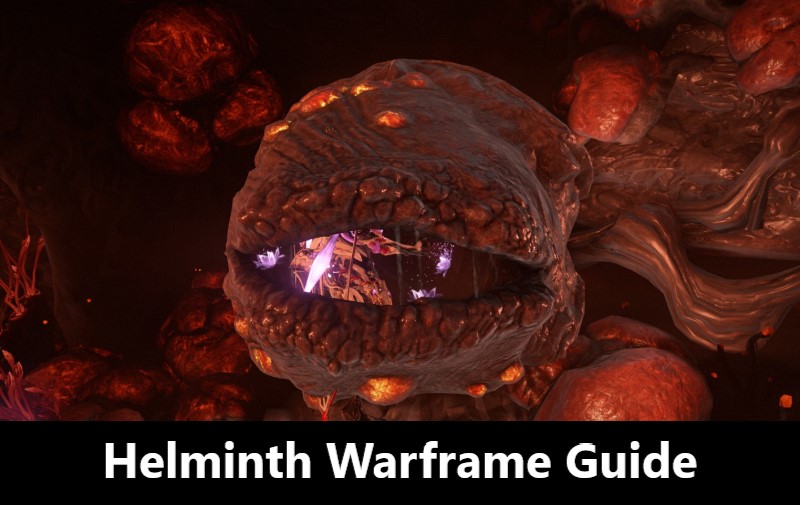 The Helminth lives in the Helminth Infirmary on the Orbiter. He is behind a sealed door you need a special method to open.

Helminth is responsible for the ‘biological functions’ of the ship, meaning the maintenance of Warframes and any repairs happening behind the scenes.

The main body of the Helminth is the large mouth attached to the back wall which swallows resources, although the Infestation in the room is likely part of him also.

Tenno interact with the core functions of the Helminth by sitting their Warframe on the infested chair in the middle of the room.

How Was the Helminth Created?

Helminth was created by Orokin to convert humans into Infested-hybrids who can give birth to Warframes. This is revealed during Executor Ballas’s Sacrifice.

When exposed to a Helminth strain, a subject’s skin will turn to sword-steel.

In addition, their internal organs are interlinked for much greater resilience, and the infestation is prevented from attacking their mind.

After getting a Helminth Cyst from an infected player or equipping Nidus, the Helminth room is accessible. There is a chair in the middle for Nidus to sit on.

Sitting on the chair activates a needle to pierce the side of Nidus’ neck and infect him with Helminth virus.

This will ‘wake’ the Helminth in the Infirmary and trigger its communications to the Tenno.

24 hours after this injection, a little pink Infected Cyst begins to grow at the injection site, and keeps growing for 7 days. It will then have little tendrils on the surface and be considered fully matured.

You can drain the Cyst while incubating a Kubrow if you want to breed a Helminth Charger, a new type of Companion, from the Incubator Segment on the Orbiter.

Any Warframes that come in to contact with Nidus will also get the Helminth Virus, as long as Nidus is infected with it. You will hear an injection sound and see a light brown cloud if you are being infected.

24 hours later, the cyst will appear on the freshly infected Warframe, who can then spread the virus to other Warframes the same way Nidus did.

This virus can only be spread when doing missions or in your Orbiter or a Clan Dojo. You can’t spread it during Relays. An Infected player can spread it to players who haven’t yet completed The Glast Gambit or any quests coming before it (The War Within).

How To Cure the Helminth Virus?

You can enter any Cyst-carrying Warframe, even if it is still immature, into the Helminth Infirmary.

Interact with the chair and this will cure the infection by removing the cyst and also vaccinating them against re-infection.

In addition, this stops the vaccinated Warframe accessing the Helminth Infirmary until the Helminth Segment is acquired (this doesn’t apply to Nidus however).

The Cyst affects the look of the Warframe but has no other effects, positive or negative.

The Helminth can replace Warframe Abilities with other Warframes’ abilities or unique ones.

You can access this through the ship’s Helminth Infirmary and you need a Helminth Segment from the Son in the Necralisk for 15,000 Syndicates.

To do this, you need a Mastery Rank of 8 and also the Rank of Associate with the Entrati.

When the Segment is built, the Helminth Infirmary stays open all the time, regardless of whether Nidus or the Cyst are present.

A Fast Travel to the Helminth ability will also be available after Segment completion.

The player sits on the chair to install this Segment and is then asked to name the Helminth using the console on the left side of the entrance.

You can subsume a Warframe into the Helminth system. This allows you to learn one of its abilities but bear in mind your Warframe will be consumed during this process.

Sacrifice any built non-Umbra or non-Prime Warframe to Helminth and you will free up an inventory slot. 23 hours later, the Warframe you sacrificed has one predetermined ability subsumed to it, which is available to use via the Helminth.

This unlocks the ability to replace an ability with the subsumed ability permanently. For example, subsuming one Mag Warframe unlocks her subsumed ability, Pull, to be used on another Warframe of your choice. The system has no effect on Passives.

It isn’t necessary for a Warframe to be at max rank to be subsumed. You can only subsume one Warframe at a time, rushing it for 50 Platinum if you so choose.

There are a finite number of subsumed abilities the Helminth is able to hold. This can be increased using the Helminth Metamorphosis rank.

You can’t subsume the same Warframe more than once.

If you want to subsume a Warframe, bring a currently equipped Warframe to the Helminth Infirmary. Sit on the chair and select ‘Subsume Warframe’ to begin.

The Warframe is then sacrificed and its ability is taken and you must then type “CONFIRM”.

When a Warframe has been completely subsumed, a Lotus flower will appear in the Infirmary, with its color matching the Warframe that was sacrified.

The Petals match the Warframe’s main color, the Stamen the second color, and the Stem the third one. The flower will emit a glow from the middle to match the Energy color.

You can add metallic accents to the petals with a Deluxe skin. If you don’t modify the colors, the flower uses the default Warframe’s colors.

To replace Warframe abilities with a subsumed one or to subsume a Warframe, you must first feed a specific number of resources from various categories to the Helminth.

The Helminth will eat nearly any resource found in Warframe and converts them into Secretions which can be spend on Helminth functions.

Different resources generate different Secretion types which are consumed when feeding him. Helminth prefers resources that can most efficiently be converted into Secretions, although he begins by liking every resource.

A green up arrow on a resource means the Helminth likes that resource and it will double how many Secretions are gained (30% maximum).

A red down arrow on a resource means the Helminth doesn’t like that resource and it will reduce how many Secretions are converted (3% minimum).

If you feed him a disliked resource you can then feed something from Sentient Appetite to bring his interest back by 50% of the least liked resource.

You can use Sentient Appetite until the disliked resource goes back to neutral.

No arrows on a resource means the Helminth is neutral and the resource will be converted into 15% which is the standard amount. You get twice the amount from Pustulite, Lucent Teroglobe and Ganglion.

If you keep feeding the same resource to the Helminth all the time, he will like it less and less. The order of feeding can also affect how many resources are converted.

If he is fed something he likes then feeding it something disliked or neutral slightly boosts the conversion amount for them. The maximum amount for a Secretion is 100% and you can’t get it any higher by topping off.

Helminth’s appetite for eating specific resources will increase little by little as long as it has not eaten them before. It takes 24 hours for a resource to go from full-red to neutral, and another 24 to get from neutral to full-green.

You can check video guide below:

Abilities for Injecting and Replacing

After subsuming an ability, Helminth can replace any ability on the chosen Warframe, including Umbra or Prime variants, with an injection.

Warframes are limited to one subsumed ability each however. You can choose which mod configuration(s) the ability injected can be used in.

So, an Excalibur Umbra for example could replace Radial Javelin with Pull on the first mod config slot, keeping the other two slots as they are.

You can also use the Warframe Augment Mods with the injected ability.

Although ability changes can be reversed, the Secretions consumed during the injection will not be returned and re-injecting the ability will cost again.

You can’t move it to the second or third slot either until Excalibur goes back to the Helminth to remove Pull and re-inject it.

Warframe doesn’t tell you whether you’re adding an ability to an already-configured slot and the infusing process will run regardless.

In addition, a unique Helminth ability is unlocked for use.