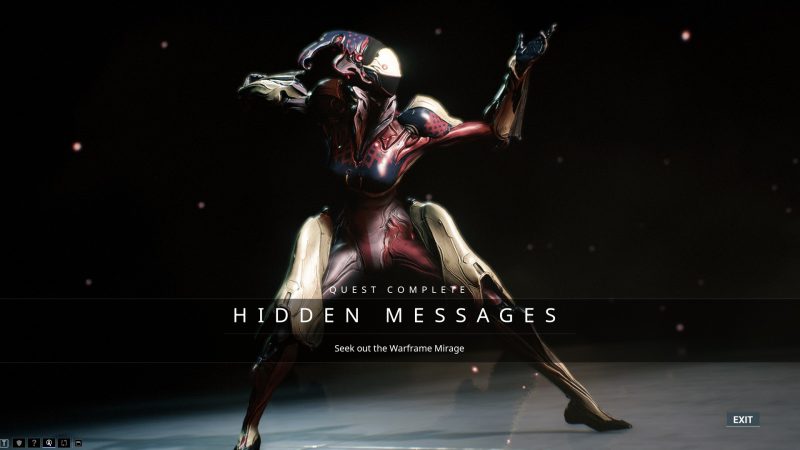 The Hidden Messages quest line was introduces during Update 14 and while it features optional questions, it is currently the only way to get your hands on the Mirage Warframe.

The quest itself consists of three riddles, each riddle will lead you to different missions for you to obtain each Mirage’s component. But don’t worry, the solution for the riddles will be listed below without spoiling too much on her story for you to enjoy.

As you start the quest, Ordis will tell you that there is a hidden transcription which is a riddle, hidden on the item you have crafted.

He will read the riddle to you with a bit of his thoughts on it. If you didn’t catch on the riddle, don’t worry, the riddle will be sent to your inbox so you could read it again.

Three parts, three acts, three riddles for thee –
to revive the one wielding fantasy
Ancient gods so cruel, once ruled from on high
Can you name their peak where the land meets the sky?

The answer to the first riddle is the Olympus node on Mars. The riddle refers to Greek mythology, Mount Olympus and that is where the home of the Olympian ancient gods.

Upon arrival, you will be doing the extermination mission against infested enemies in the Infested Ship tileset. While exterminating, the Lotus will appear and says that there is a void imprint in the area and she is getting a faint visual which seems to be memories.

She tells you to continue your mission while she investigates further. As you go further with the extermination, the Lotus will appear again and will describe the memories she had seen and told you that she is not sure what it means.

While on your way to extract after the successfully exterminating of all infested enemies, the lotus will appear again for the third time and tells you more details about the memories.

After that, she recovers a blueprint from the memories, you now obtained the Mirage Neuroptics Blueprint.

Upon returning from the mission, go to the foundry and craft the Mirage Neuroptics Blueprint to continue the story.

To build the one you think witty,
seek the nymph who sang oh so pretty.
She lured him in with her song and grin,
his wife must’ve thought it a pity.

The answer to the second riddle is Calypso on Saturn. Again, the riddle refers to the Greek mythology and Calypso was a nymph that lured the Greek hero Odysseus with her song and trapped him, making Odysseus her immortal husband and forcefully leaving his wife, Penelope.

Upon arrival, you will be doing a 15 minutes Survival mission in Calypso against infested enemies in the Infested Ship tileset.

In this mission, the Lotus will receive more void imprint detailing more of what happened in the past and another blueprint is recovered. you now obtained the Mirage Systems Blueprint.

Upon returning, you must again craft the Mirage Systems Blueprint to continue the next story.

Once the Mirage Systems is completed, Ordis will find another one last hidden riddle on the Systems. He will again read the riddle to you with remarks and send the riddle to your inbox so you can read it again.

One more act before your prize is caught.
An ancient sea creature, take a whirl or not?
Look for the monster that swallowed sailors of yore.
Make a mistake and you’re sunk. Nothing more.

The answer to the third and last riddle is Charybdis on Sedna. Charybdis is also part of Greek mythology. He is a sea monster, an ancient sea creature that was thought to be a whirlpool, swallowing everyone near him in the sea, ships, and sailors alike.

As you arrive at Charybdis on Sedna, you will be doing a Hive Sabotage mission in an Infested Ship tileset. After successfully destroying the first hive, the Lotus again will receive more void imprints, detailing more of what happened next in the previous memories.

This indicates the last memory that was left of the Mirage. Upon completion of the mission, the lotus recovers the last blueprint of Mirage, The chassis blueprint.

When you return to your ship, the Lotus will tell you to forge Mirage Warframe in the honor of her memories.

You must craft the Mirage Chassis blueprint to complete the Hidden Messages quest.

After crafting the final component for Mirage, Ordis reads the final transcript that is found on Mirage’s Chassis.

Three acts complete, the end draws near,
Soon Mirage will cause fear.
Memory lost, to be reborn,
a new warrior rises, duty sworn.

Crafting Chassis will unlock the Mirage main blueprint in the Market, finally completing the quest and the Warframe, giving you a lot of different possibilities to start on her Fashionframe options.