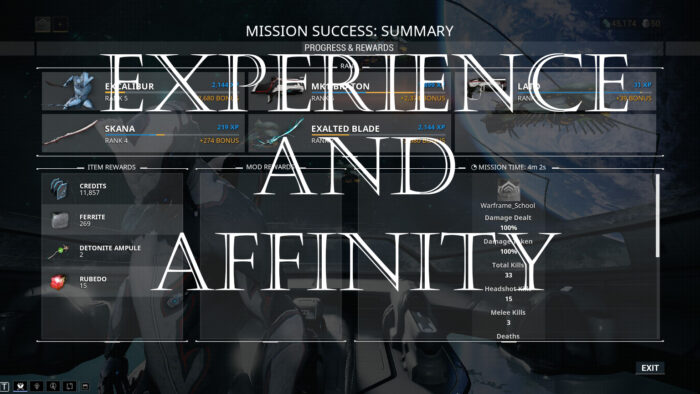 Experience is a big part of every RPG-like game and Warframe is no exception.

You can level up your Warframes and weapons multiple times and each level up increases the stats of your equipment.

Higher levels also increase the mod capacities of your weapons and Warframes, especially once you reached the max level 30.

After that you can put in a Forma, set your Warframe or weapon back to level 0 and restart the leveling process – but this time you do have another polarity, halving one of your mod’s capacity requirements.

But there is also another experience instance in this game, directly influencing your Master Rank level, which in return increases your daily standings, your standard mod capacity and more.

Higher Master Ranks also allow you to buy or craft (and use) better weapons, so getting to a higher MR is very beneficial. So lets start with that and talk about affinity later.

How To Raise Mastery Rank

As mentioned above, Master Rank does have a lot of benefits, but doesn’t work with Affinity, which is the experience used for Warframes, weapons and co.

So rather see it as your account level. It directly has influence on mods, weapons and Warframes, so until you reach a certain threshold, raising it as fast as possible should be a high priority for you.

There are different ways to increase your Master Rank, but all of them have to do with ranking up your stuff.

For each time you rank up something you do get experience on your account level – but only for the first time. Using a Forma and ranking up a weapon or Warframe again won’t increase your MR experience. Here is an overview:

Keep in mind that there are different weapon versions that will all give you experience.

For example, building the Tigris, the Tigris Prime and the Sancti Tigris will give you 9.000 experience points once you reached max level with all of them.

The same is true for companions or Warframes and their primed version.

A rule of thumb: If an equipment can be found in your ‘Equipment’ tab in your profile it will give you MR points.

How To Gain Affinity

Increasing the level of your Warframes, weapons, companions, Archwings and Co is done through Affinity.

There are different possibilities to gain affinity, for example by using your Warframe abilities, hacking a terminal, collecting affinity orbs (dropped from enemies or stashes) or by simply using a codex scanner.

But the best way to gain affinity is to simply kill enemies. While that should be pretty obvious, the way the affinity distribution works isn’t as obvious:

Crafting lots of weapons and Warframes and getting them to max level is an important part of the game.

A lot of weapons are simply considered “MR fodder” and not really used. They are usually pretty weak and can’t compete with their competitors.

Using them after reaching level 30 once feels useless and not worth your time.

Are Affinity Boosters Worth Platinum?

If you take a look at the ingame market you do see a lot of different boosters, obtainable by using the ingame currency Platinum.

The affinity booster will double your affinity gain, so having one of those is usually a good idea – at least in the right circumstances.

If you do have more Platinum than you need or if you know you’re going to power level Warframes and weapons in the next few days, getting one of those can be super useful.

Especially if you plan on using lots of Forma during your booster episode you will save a lot of time.

That said, paying 200 Platinum for 30 days is generally speaking not the best idea.

If you know you will play a lot during the upcoming weekend (or week), getting the 3-day-booster is the better idea.

But if you don’t care about Platinum, picking up the 30-day-booster is also fine, even though resource booster and resource drop chance booster (and even credit booster) are a better choice.

Gaining experience is very important in Warframe, but you need to know how to maximize it. Especially if you want to quickly increase your MR level or simply use lots of Forma on a weapon or Warframe, knowing how affinity works is very important.

Also, joining dedicated XP farming groups seems like a good idea, but often times playing through the star chart, doing fissure missions or Arbitrations will yield a similar (or even better) result.

Just make sure to find a good group, pick a load out that can support your weaker weapons/Warframes and don’t forget to have fun while playing the game!