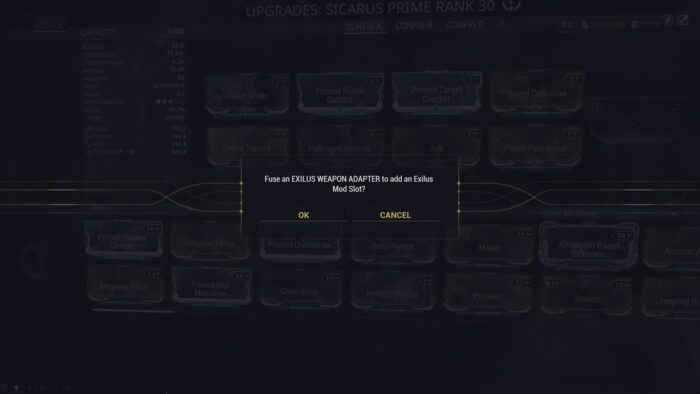 One of the few new features that came with Update 26 is the inclusion of exilus mod slots for your primary and secondary weapons.

The extra mod slot can easily be accessed by using a so-called Exilus Weapon Adapter, which basically works the same way as the adapters you were already using for your Warframe.

The basic concept should be fairly easy to understand: Get the blueprint, craft it in your foundry and then use it on one of your weapons.

Since most of you usually use more than just one or two weapons and since all your weapons actually benefiting (some more, some less) from the inclusion of the Exilus mod slot you really want to gather as many of these adapters as you can.

As with Formas you can only craft one every 24 hours, so make sure to log in once a day if you’re trying to get those.

How To Get Exilus Weapon Adapter Blueprints

There are actually two fairly easy ways to get your hands on Exilus Weapon Adapter blueprints, with both of them using tools you already are working with (or at least should be working with).

Since you can only craft one per day you could actually use an hour or two of your play time, grind for some amount of blueprints and use them day by day without having to farm for them in a while.

Or you could just get one per day. In the end it is up to you and how you want to spend your ingame time.

Here is how to get Exilus Weapon Adapter blueprints:

While this might sound like a lot it is a great way to get a blueprint guaranteed.

If you already have enough standing and you need it here and now, this is the best way to get the extra upgrade for your weapon.

It is also a good standing sink if you already have everything you need and want from your current syndicate.

Those special relics are usually used, because they have a chance to drop special mods needed to kill your own, personal Kuva Lich.

The rare drop however is always a Exilus Weapon Adapter blueprint, so you can actually use all your Requiem Relics you don’t need otherwise.

Make sure to upgrade those to radiant to increase your chance of the rare drop (from 0,5% at intact to 10% at radiant).

There is also a chance to find a Requiem Relic opening group in recruitment chat, where all four members use radianted relics – which gives a decent chance to get the rare drop.

As with Warframe Exilus Adapters you can also buy the weapon version already fully built for 20 Platinum (check out our Platinum Farming Guide if you are low on currency).

Either search your ingame market for it or simply click on a not-opened exilus slot in your weapon modding menu – if you don’t own an exilus adapter the game will automatically ask you if you want to purchase one for Platinum.

Since there is a hard cap on the daily syndicate standing you can’t use that method to actively grind your way towards the blueprints, but it is always a nice addition.

If you really want to farm multiple Exilus Weapon Adapters per day you need to get your hands on a lot of Requiem Relics and open them up – preferably by using your Void Traces on them.

Exilus Weapon Adapters are actually a great way to use one of the Utility Mods (e.g. Ammo Drum, Cautious Shot or Terminal Velocity), which you wouldn’t use otherwise.

Sure, it might be grindy to actually upgrade all your favorite weapons and it takes a lot of time not only to build, but also to farm these blueprints.

But in the end it will be worth getting the upgrade, even though it might just be a small one.

If you think we’ve missed some important information or if you want to add your tips, don’t hesitate and leave us a comment down below.