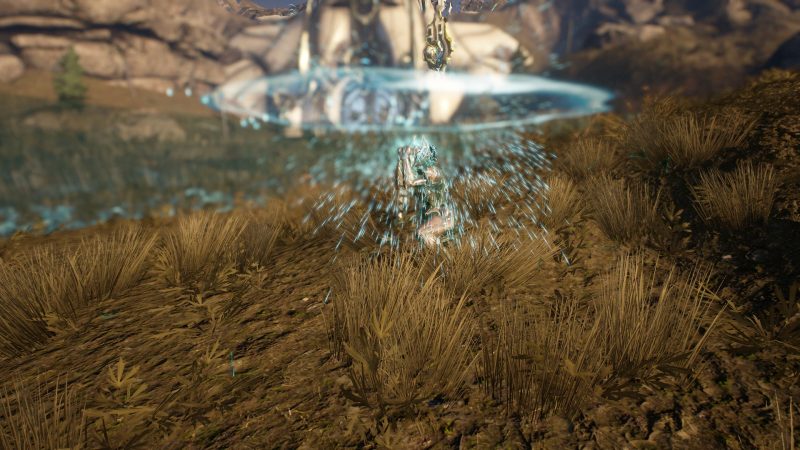 Defending an objective is a core part of Warframe. Whether it’s a round of defense, mobile defense, or you’re just defending the console you hacked in sabotage, there are a lot of missions where it’s important to bring a frame who can say, “No solicitors.”

And when it comes to objective defense frames, you have a lot of great choices.

There’s the OG Frost with his snowglobes, Vauban’s bastions, Limbo’s bubbles, and even Khora’s strangledome (if you were lucky enough to get all her pieces…)

And all of those frames are good at stopping the hurt from coming down on your poor objective, but what if you don’t want to just stop the hurt?

What if you want to send it back? All of the frames above have decent offensive options, but no other defense frame can bring the pain like the Glass Warrior: Gara.

If you’re looking for some information on how to build the Warframe, check out our Gara Builds Guide!

How To Get Gara

So let’s jump right into it! To get Gara, you’re going to have to complete the quest Saya’s Vigil. Before you can do it though, you must have completed at least one bounty on Cetus.

If you haven’t yet, make sure you’ve finished Vor’s prize, and travel to Cetus on Earth.

Once there, go find Konzo, the old man standing by the large Orokin tower.

If you’re having trouble finding him, just press Escape to open your menu, click fast travel, and then click Konzu.

Once you have done a bounty, you’re ready to start the quest.

To do so, go talk to Konzo about ‘A personal favor‘. Once Konzu tells you about the quest, he’ll send you to talk to Saya, another Ostron in the village.

Simply follow the white quest marker and proceed through the dialogue as normal. Be advised though, during your dialogue with Saya, she’ll ask for your help.

As soon as you accept, you’ll be sent straight into the first quest mission on the Plains of Eidolon. So make sure you’re dressed for the big dance before you go talk to her!

Tips Before You Start

Before you start on your journey though, here’s a couple tips:

#1 Be Ready To Travel

If you haven’t spent much time on the Plains yet, it’s a lot of walking. We mean, like, a loooooot of walking. Bringing something to help you travel can really help the process.

The best thing to bring would be an Archwing launcher or your K-Drive.

But if those aren’t in your arsenal yet, bringing a zippy frame like Loki, Volt, Nezha, or Gauss with the Sprint mod goes a long way.

Alternatively, mod a Nova for high range and efficiency and just blink your way to the next objective.

We’re not in Kansas anymore. Actually, scratch that. We are EXACTLY in Kansas now!

Gone are the tight Corpus hallways and the suspiciously large Grineer HVAC vents. Everything is wiiiiide open space with nothing but hills and grass now.

So if the longest range weapon you brought is an Amprex, you’re gonna have a bad time.

Make sure to bring a long range weapon with hit-scan bullets.

You have plenty of great choices like the Rubico, Vectis, Tiberon, or Argonak.

Whatever your bring, just make sure it’s something that can take people’s heads at a distance.

#3 Be Ready to Brawl

If you’re on the Plains, at some point, you’re going to be clearing a Grinner camp by yourself. Probably more than a few.

This means mostly open spaces, very few places to hide, and everybody is shooting at you.

Try bringing a frame who won’t be seen, like Loki or someone who doesn’t care if they’re seen, like Rhino.

Again, bring whoever feels comfortable for you, but make sure it’s someone who’s ready to fight!

As you work your way through the quest, you’re going to have to do some scavenger hunts with your scanner.

Bring a Helios and he’ll do the scanning for you if the object is close enough! And if you have it, use the Synthesis Scanner from Cephalon Simaris with the Sol-Battery Widget.

That way your scanner has unlimited charges. Not to mention the best part, Helios can use it too!

Your scanner is important for this quest, so we’re going to talk a lot about it. The scanner will highlight objects of interest for you, even through walls.

So try to have it open all the time, not just when you think you’ve found something to scan.

Objects you haven’t completed your codex entries on will show up in orange, so if this is your first time using the scanner, everything is going to be orange.

Completing your codex entry will make scannable objects show up in green.

This makes your life significantly easier later on when you’re trying to find things like rare plants in the middle of the forest!

Last, but not least, at some point you’re going to have to fight a big brute called Nox.

This will probably be a lot of readers’ first time fighting him, so we’re going to talk about him as his own little section in just a minute.

Once you’ve got all that locked in, it’s really just go where Konzo points you, do what the Lotus tells you, and scan the shinies.

Once you’re through it all, you’ll have a shiny, brand-new Gara blueprint!

Short of an Ambulas and maybe a couple Eximus, Nox might be the single most annoying enemy unit that doesn’t come with a boss’ health bar.

So it’s important to be ready for a fight. Let’s get right into it.

Once you have Gara’s blueprint you’re going to need to get her pieces. You earn the blueprints for them by doing bounties for Konzo.

We’ve included a table below for you, but if you need to check quickly in-the-moment, you can mouse over a bounty to view its rewards and drop rates.

It’s a great way to double check what you’re working on, so be sure to take full advantage of it!

Statistically, you probably need a few runs to get each piece, but don’t be surprised if you hit a dozen tries getting that one last piece. Warframe is tricky like that.

If you don’t have them yet, you’ll need a fair amount of Cetus resources to build Gara once you have all her blueprints.

If you’re not sure what you need, you can check her manufacturing requirements here:

And that’s everything you need to know about the Glass Warrior! Make sure when you’re farming bounties to get her parts that you try to maximize your time on the Plains.

If it’s not going to slow your team down, or if you’re waiting on an objective, try to snag mining nodes when you walk by them. It’s even easier if you use Fortuna’s Sunpoint Drill.

Volt makes fishing easier since you don’t have to use the right rod, and dyes make the fish easier to spot. And don’t forget, mobility and range are key for Bounties.

Make sure you’ve got the right gear for both!